Joe Biden became our next president Wednesday as 25,000 National Guard troops patroled Washington, D.C., and most bridges into the District were shut down.

Security is unprecedented in D.C. on Inauguration Day after the FBI warned of threats to the city and the possibility of armed groups demonstrating in support of outgoing President Donald Trump.

Biden and Vice President-elect Kamala Harris took their oaths of office two weeks after a mob of angry Trump supporters stormed the Capitol in a chaotic protest aimed at thwarting a peaceful transfer of power. Five people died, including a U.S. Capitol police officer and a woman shot by an officer.

Streets were calm with signs of significant demonstrations as of mid-afternoon.

There are three times the number of National Guard members in D.C. than normally would be in the city for a presidential inauguration, the commander of the D.C. National Guard, Maj. Gen. William Walker, said.

“We’re not taking any chances,” he said.

Pentagon officials said Tuesday that 12 Army National Guard members were removed from securing the inauguration after vetting by the FBI, including two who posted and texted extremist views about Wednesday’s event.

The leaders of D.C., Maryland and Virginia advised people not to come to D.C. to witness the inauguration.

“Due to the unique circumstances surrounding the 59th Presidential Inauguration, including last week’s violent insurrection, as well as the ongoing and deadly COVID-19 pandemic, we are taking the extraordinary step of encouraging Americans not to come to Washington, D.C., and to instead participate virtually, D.C. Mayor Muriel Bowser, Maryland Gov. Larry Hogan and Virginia Gov. Ralph Northam said last week in a joint statement.

Washington, D.C., Mayor Muriel Bowser spoke out to condemn the far-right violence at the Capitol Building and urged all residents in the area to remain indoors.

What Is Shut Down

Fences surround the Capitol, multiple Metro stations are closed and the U.S. Secret Service and other law enforcement agencies have dramatically expanded the area restricted for drivers.

A seven-foot-high, unscalable fence encircles the Capitol. Armed National Guard troops patrol the area, and military vehicles are on streets. The U.S. Capitol complex is closed to the public, and the grounds are not be accessible on Inauguration Day.

“Anyone attempting to unlawfully gain access to the Capitol Grounds by climbing a fence or any other unlawful means will be subject to an appropriate use of force and arrest,” Capitol Police said in a statement.

Several blocks around the White House are locked down. The area is bordered by K Street NW, 14th Street NW, Constitution Avenue NW and 19th Street NW. Anyone attempting to enter can expect a security screening. Authorities may ask to see proof that people are in the area for an essential reason.

The area restricted for drivers spans as far north as Dupont Circle, as far east as Sixth Street NE, as far south as the Southeast/Southwest Freeway and as far west as the Potomac River. A smaller area will be completely closed to vehicles. 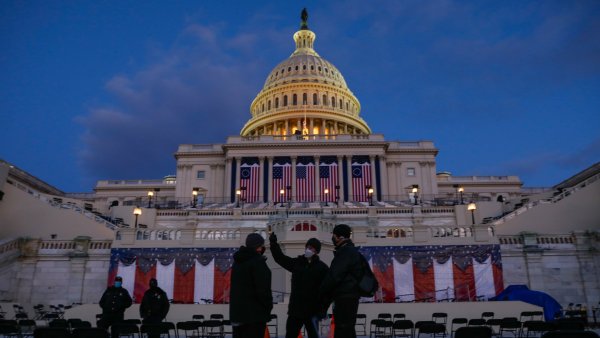 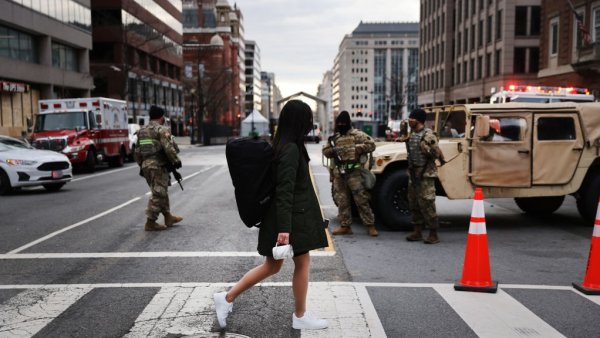 The D.C. road restrictions and closures will remain in place until after the inauguration, the Secret Service said. Officials warn that changes to road closures may be made if conditions warrant.

All parking garages and loading docks in the White House zone are restricted. Any vehicle in any parking garage or loading dock within the zone will be stuck there until inauguration concludes, authorities have said.

The restrictions apply to residential and commercial buildings. Business deliveries must receive special screening at an off-site facility.

A number of bridges into and out of D.C. are closed. If you have to travel between D.C. and Virginia, or between Ward 7 or Ward 8 and the remainder of the city, plan your route first. Go here for full info on road, bridge and Metro station closures.

From a transportation perspective, downtown D.C.is closed off like never seen before. Transportation Reporter Adam Tuss reports on a growing list of major bridge closures.

Metro has closed its Pentagon station for Inauguration Day, and another 13 stations inside the security perimeter will be closed through Jan. 21:

Trains will pass through the affected stations without stopping. They are operating on a Saturday schedule of every 12 minutes on the Red Line and every 15 minutes on other lines.

In addition, 26 bus routes are detoured around the security perimeter. Metrobus is operating on a Saturday schedule for Inauguration Day.

What We Know About Potential Security Threats

The FBI has warned of threats to D.C., including to lawmakers and federal monuments, and the possibility of armed groups demonstrating in the District on Inauguration Day.

D.C. Acting Police Chief Robert Contee said his department faces “major security threats.” He said In his decades-long career with the Metropolitan Police Department, he had never seen so many agencies provide such a high level of help for a large event.

"It is all hands on deck for this from the federal, state and local law enforcement and intelligence communities," said Matthew Doherty, former head of the U.S. Secret Service National Threat Assessment Center.

“We are very confident about that type of coordination as we have been with other National Special Security Events,” Bowser said.

Right now, DC is a fortified city. Practically every road downtown is closed along with the National Mall. DC Police has "all hands on deck" and a massive force of federal agents and National Guard troops are guarding federal buildings and monuments. News4's Mark Segraves reports.

Here’s How You Can Watch

It doesn’t quite feel the same as being there in person, we know, but your best bet is to watch inauguration events from home on TV or online.

The day’s events will be broadcast on all major television stations, including on NBC4, and live streamed here on our website and in the NBC Washington app.

A prime-time special hosted by Tom Hanks will be broadcast live on News4, here and in the app starting at 8:30 p.m. ET.