A major snowstorm — the biggest since the blizzard of 2016 — dumped more than a foot of snow on parts of the D.C. area, leaving residents coping with power outages, poor road conditions and disruptions to COVID-19 testing sites.

Traffic remains a mess, with hundreds of drivers stuck — some, shockingly, for more than 24 hours — or getting into crashes on roadways throughout the region.

Some areas of Virginia and Maryland saw about 14 inches of snow. Storm Team4 Chief Meteorologist Doug Kammerer has the snowfall totals and the latest forecast.

Here are some of the other snowfall totals for our region:

Here are snow totals tracked by the National Weather Service so far. The NWS typically updates data every three hours. 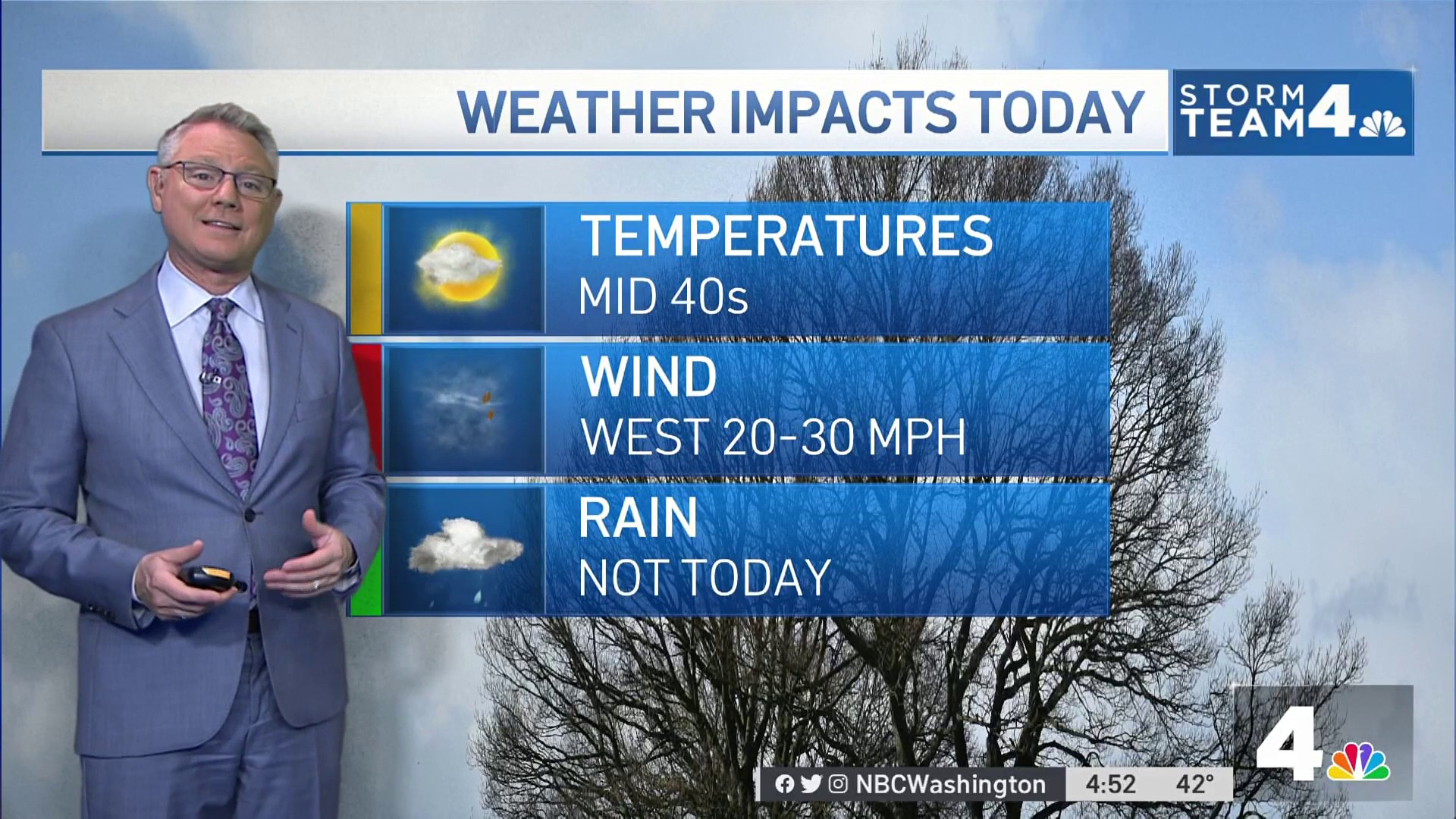 Storm Team4 is in Weather Alert mode and has minute-to-minute team coverage across D.C., Maryland and Northern Virginia.

Wet, heavy snow started to stick in parts of the region in the early hours, and fell fast. During the thick of the storm, Kammerer said up to 1.5 inches of snow fell per hour in downtown D.C.

News4's Cory Smith reports from the snowfall in Southern Maryland.

D.C.-area federal offices closed Monday and all Metrobus service was suspended. D.C. Mayor Muriel Bowser declared a snow emergency and then extended it through 7 a.m. Tuesday.

All Smithsonian museums and the National Zoo were closed Monday. The Smithsonians opened three hours late Tuesday; the zoo remained closed for a second day.

A winter storm warning and a winter weather advisory for parts of the region have ended. However, a special weather statement is warning that Wednesday's commute could be icy due to the chance of light freezing rain or drizzle. Go here for a full list of weather alerts from the National Weather Service.

As of about 4:30 p.m. Monday, more than 200,000 power company customers across the region had no power, but those numbers have been decreasing as service was being restored Tuesday.

Road and Transit Conditions in D.C., Maryland and Northern Virginia

News4 is tracking what you should know about road conditions in the region. Hundreds of crashes have occurred. Crews across the region are working to make roads safer.

D.C.’s mayor asked residents to stay off the roads and let crews work.

Virginia State Police had responded as of mid-morning to 313 crashes and 277 disabled vehicles, many caused by drivers going too fast for the conditions. No deaths were reported.

Hundreds of drivers were stranded for more than 24 hours in Virginia, making national headlines as they remained in their cars overnight, some without food, water or blankets.

Heavy snow took down the outdoor seating tent at a restaurant in Northwest D.C. Elsewhere in the city, the snow caused traffic issues and interrupted plans for COVID-19 testing. News4's Mark Segraves reports.

In D.C., a full deployment of more than 100 snowplows hit the streets at midnight Monday to treat roads with salt. You can go here to track plows in real time.

“My message from State Highway to all the drivers out there is, if you don’t have to be on the roads, please stay off,” said Sherry Christian of the Maryland State Highway Administration.

D.C. Mayor Muriel Bowser declared a snow emergency. Up to 1.5 inches of snow were falling per hour in downtown D.C. as of midday, Storm Team4's Doug Kammerer said.

The list of school closures grew by the minute Monday, and more closures were announced Tuesday. Some are now coming in for Wednesday as well. Go here for the full list.

D.C. Public Schools were already scheduled to be closed Monday and Tuesday amid a major effort to test every student and staff member. The mayor announced that because of the storm, students must now test on Wednesday, Jan. 5 and schools will reopen on Thursday, Jan. 6.

A number of school districts already had either no school or virtual learning planned, unrelated to the snowstorm.

The D.C. government was in a teleworking posture for non-essential and non-emergency employees.

In Maryland, a number of state offices and facilities were closed. Emergency essential employees were told to report as scheduled. Go here for info.

In D.C., pickups of trash, recycling and Christmas trees will move to the next day for the remainder of the week. Drivers cannot park on snow emergency routes. Cars packed on these routes may be towed.

D.C. asked property owners to treat their sidewalks before the storm started. You can volunteer with the Serve DC Volunteer Snow Team to clear sidewalks for registered seniors and other residents who need help. Volunteers are especially needed in Wards 4, 5, 7 and 8, a message from the city said. Go here for info.

The District’s Hypothermia Alert system was activated. Residents are encouraged to call 311 or 202-399-7093 if they see someone in need of shelter.

“I don’t think anybody is ready for this,” News4’s Adam Tuss said during temperatures in the 60s on Sunday.