DC Residents Line Up for Start of Early Voting Tuesday

D.C. opened the doors Tuesday at early voting centers across the city to lines of citizens waiting to cast their ballots in-person for the presidency, D.C. Council and more.

Thirty-two early voting centers, including six Super Vote Centers that can accommodate larger crowds, are located across all eight wards. Here’s a map of locations.

Most early voting centers are scheduled to be open daily from 8:30 a.m. to 7 p.m. between Tuesday, Oct. 27 and Monday, Nov. 2. Check the hours and wait times at your location here.

Board of Elections officials said incorrect wait times at polling sites were posted online Tuesday because of a "small technical glitch." Some locations were shown as having waits of as long as 90 minutes when there were no lines.

Mid-afternoon on Tuesday, lines at voting centers were a mixed bag, with waits ranging from less than five minutes to more than 90 minutes. However, each ward had at least one location reporting a wait of fewer than five minutes.

You can vote at any location during this election, not just those in your ward.

Chairman of the D.C. Board of Elections Michael Bennett says they actually want to see long lines at super vote centers including Capital One Arena, Nationals Park and the Entertainment and Sports Arena.

Bennett says those centers can process people fast. He also hopes that people will vote early, instead of waiting until Election Day.

One voter arrived at Capital One Arena before 7 a.m., anticipating a line that would stretch down the block of 6th Street NW before the voting center opened.

"Me and my family, we really wanted to get out early just so we can get the process over and done with before some of the mass crowds got here," he said.

The line was shorter by midday, after the first wave of people cast their ballots.

"It should be very convenient, very easy with lots of space," Monumental Sports and Entertainment executive Monica Dixon said about voting at Capital One Arena. 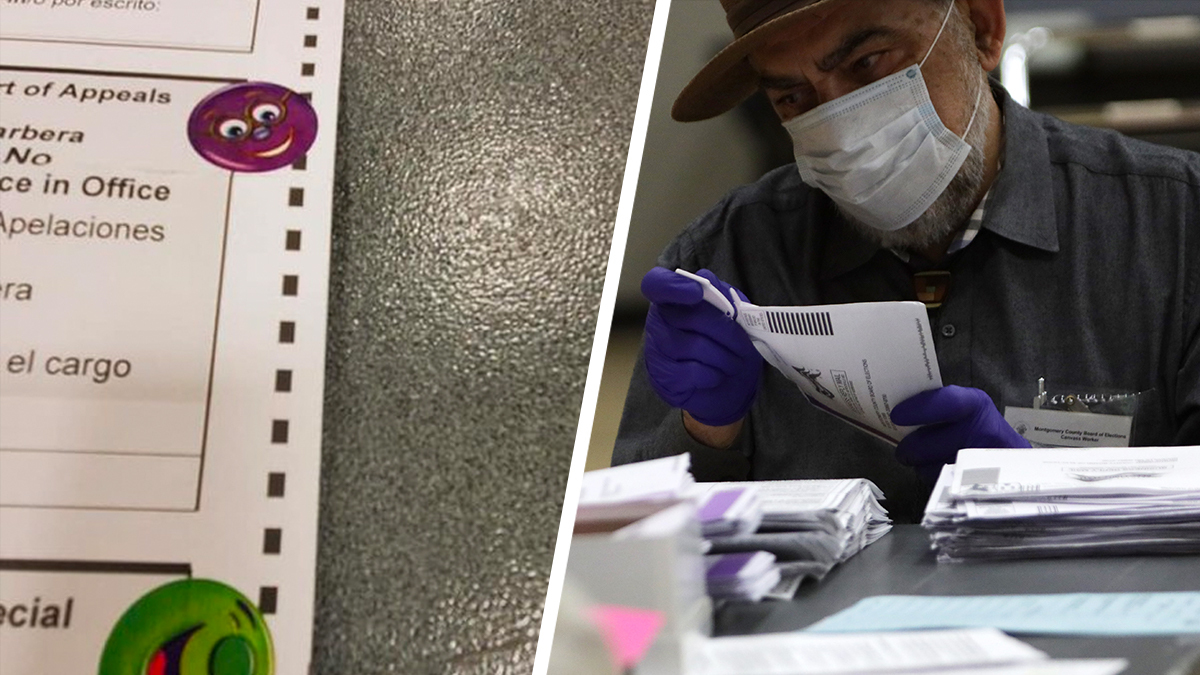 If you decide to vote in person in D.C., come prepared. Wear a mask or face covering and consider bringing hand sanitizer.

Registered D.C. voters don’t need to present an ID or proof of residency to vote. However, it’s a good idea to bring a form of ID in case you need it, officials say.

If you are not registered or you need to update the name or address on your voter registration, you can do so at a voting location.

To register, bring an acceptable form of proof of residence with your name and address such as a DMV-issued ID, recent bank statement or utility bill. Here’s a full list of accepted registration documents.

If you are one of many voters who requested an absentee ballot but decided to vote in person, you'll be required to fill out a form for a special ballot. Then, you'll fill out and place your special ballot inside two envelopes and hand it to a poll worker.

Those ballots will be checked against your registration to ensure no one votes twice.

Voters will make their picks for president and in several local races, including choosing between 24 candidates running for two at-large seats on the city council. Voters in Wards 2, 4, 7 and 8 will also pick councilmembers. Here are sample ballots.

There's also a referendum on the ballot, Initiative 81, proposing that police de-prioritize the enforcement on cultivation, distribution, possession and use of entheogenic, or psychedelic, plants and fungi.

Voting early and in-person is just one of several options for casting your ballot.

Another option is visiting one of 96 in-person voting centers on Election Day.

You can also fill out a mail-in ballot. The ballot must be postmarked by Election Day and arrive no later than Nov. 10. If you prefer, mail-in ballots can be dropped off at one of these locations.

D.C. law requires that employers grant at least two hours of paid time off to vote, but your employer may ask you to request time off in advance. Students can also get an excused absence to leave for voting.