A prisoner who escaped from a Northern Virginia hospital — and evaded capture for most of Tuesday morning — is back in the custody of U.S. marshals.

Wossen Assaye was found near Minnesota Avenue SE in Washington, D.C., following a massive manhunt that lasted about eight hours. He was taken into custody without incident about 11:15 a.m. after someone who saw Assaye's picture on social media spotted him getting off a Metrobus. The gun he was carrying was recovered.

A man suspected in a dozen bank robberies in Virginia is back in custody after police say he escaped two guards at Inova Fairfax Hospital and stole two cars before getting spotted in southeast DC.

Assaye was wearing a white plastic protective suit, which was open to his navel. He was not wearing socks or shoes, and he was surrounded by law enforcement in the courtroom.

Northern Virginia Bureau Reporter David Culver talks with neighbors in the midst of the police search for the inmate escapee.

He is in the custody of U.S. marshals, who are not commenting on his location. In a statement Tuesday night, the U.S. Marshals Service said, "Events such as today's escape will be investigated and reviewed. If changes are needed, they will be made."

"I'm thanking each and every community member in this region for apprehending a violent felon,'' Fairfax County Police Chief Col. Edwin C. Roessler Jr. said at a news conference.

Assaye, 42, was arrested by federal authorities last week in connection with a series of bank robberies in Northern Virginia. Assaye allegedly committed the robberies while on a bike, and is known to the FBI as the bicycle bandit.

While being held at the Alexandria City Jail, Assaye attempted to hang himself with a bedsheet and was taken to Inova Fairfax Hospital for medical treatment Friday. Deputies with the Alexandria Sheriff's Office guarded Assaye for the first 24 hours of his hospital stay before he was turned over to two Allied Protective Service guards, who were contracted by the U.S. Marshals Service.

Suspected “bicycle bandit” Wossen Assaye was surrounded by U.S. marshals in court Tuesday afternoon following his escape from a hospital and the manhunt to recapture him.

At about 3:15 a.m. Tuesday, Assaye overpowered one of the guards while her partner used the restroom, taking her weapon. Assaye used the female contract guard as a shield as he fled down the hall and then released her and fled down a stairwell, U.S. Marshal Bobby Matheson said. 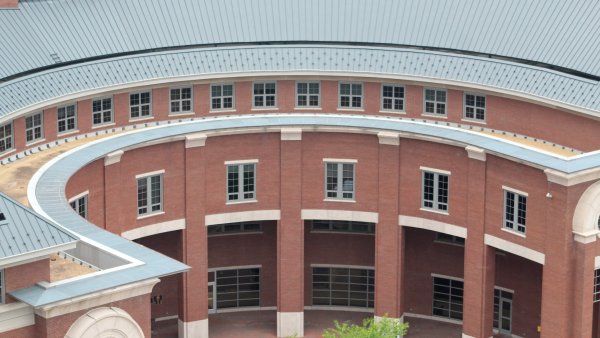 Police say one shot was fired, but no one was injured. It's not clear who fired the shot.

Inova Fairfax Hospital continued operating during the lockdown that followed the escape of the suspected bicycle bandit. Jackie Bensen reports.

Assaye fled with the weapon and wearing only a hospital gown into a nearby neighborhood, where he broke into the truck of a resident's 2002 Toyota Camry. The driver got into the car to go to work, and during the commute, police say Assaye began to kick out the back seat from inside the truck. The driver crashed the car, and Assaye carjacked the vehicle. Police say they later found the Camry near Monterey Drive in Annandale.

At one point in the chase, Assaye drove into the garage of a home on Oak Court in Annandale owned by Lorraine Giovinazzo. Then he entered the almost-empty house, apparently by jimmying the handles on a set of glass doors.

Assaye left behind the hospital gown he had been wearing and took some of Giovinazzo's old clothes, Giovinazzo said.

Assaye was on foot for a short time before stealing a 2008 gray Hyundai Elantra in the same area.

Police searched neighborhoods in Annandale with helicopter and heavily armed officers for a portion of Tuesday morning. In one neighborhood, Spence Limbocker said he heard a helicopter, went outside and saw a massive police presence.

"They told me to get back in the house and lock all my doors ... It was a little scary,'' Limbocker said.

Assaye was arrested March 20 and charged with a robbery at Apple Federal Credit Union in Alexandria. In a court document, an FBI agent suggests that Assaye, of Arlington, is responsible for a string of 12 bank robberies in northern Virginia over the last year and a half.

In court documents about the robberies, the FBI agent said the robber seen in surveillance photographs and video recordings is "physically similar'' in the dozen robberies that end with the robbery of the Apple Federal Credit Union.

In all, the banks were robbed of about $32,000. In most cases, the agent said the robber entered the bank with a cellphone to his ear, demanded money and fled with cash on a bicycle.

According to a 2012 Virginia Parole Board document, Assaye has an "extensive criminal record" and "history of violence," indicating a "serious risk to the community," NBC News reports.

He has been charged with a variety of felonies — including breaking and entering in 1998 — with at least one conviction, for purse snatching in 1994, for which he was given a recommended maximum 12-month jail sentence.

The lockdown at the hospital, located in suburb just outside of Washington, D.C., lasted from 3:30 a.m. to 7:50 a.m., hospital officials confirmed.

During that time, no one could enter or leave the hospital. Emergencies were diverted to other emergency rooms. Patient care continued, though some elective surgeries had to be delayed.

Staff members inside the hospital told News4's David Culver that during the lockdown, some employees hid in backrooms and hallways for safety.

Stay with News4 on-air and online for more on this developing story. The Associated Press contributed to this report.