Here's a look at abortion laws and restrictions in D.C., Maryland and Virginia — plus what Mayor Muriel Bowser, Gov. Larry Hogan and Gov. Glenn Youngkin said after the Supreme Court's ruling

Whether people seeking abortions can legally access them where they live is expected to change dramatically after the U.S. Supreme Court’s ruling Friday overturning Roe v. Wade, the landmark ruling that granted a federal right to abortion.

About half of U.S. states were considered “certain or likely” to ban abortion if Roe fell, according to the abortion-rights think tank the Guttmacher Institute. Twenty-two states, largely in the South and Midwest, already had total or near-total bans on the books.

Sixteen states plus D.C., meanwhile, have protected access to abortion in state law, and several states moved to expand or strengthen those protections this year.

Republican Virginia Gov. Glenn Youngkin praised the Supreme Court ruling Friday and said he asked state lawmakers to ban the procedure at 15 weeks of pregnancy, with some exceptions.

Here's a look at the laws and restrictions on abortion in D.C., Maryland and Virginia:

Abortion is legal in D.C. in all stages of pregnancy, including late-stage and third-trimester abortions. The District is considered to have some of the least restrictive abortion laws in the nation.

Mayor Muriel Bowser said in a statement Friday, “Washington, DC is a proud pro-choice city and access to abortion is still legal here.”

The D.C. Council has long supported reproductive rights and protections for health care workers who perform them. In 2017, the council passed the Abortion Provider Non-Discrimination Amendment Act, an amendment to 1977’s D.C. Human Rights Act that made it illegal to discriminate against health care professionals for providing abortions or speaking publicly about their support for the procedure.

After the leak of the Supreme Court's draft opinion on abortion, several council members and the District’s non-voting House Del. Eleanor Holmes Norton pointed out that, despite overwhelming support, reproductive rights in the District are vulnerable because of the federal government's oversight of D.C.'s laws and budget.

US Abortions Rose in 2020 After Three Decades of Decline 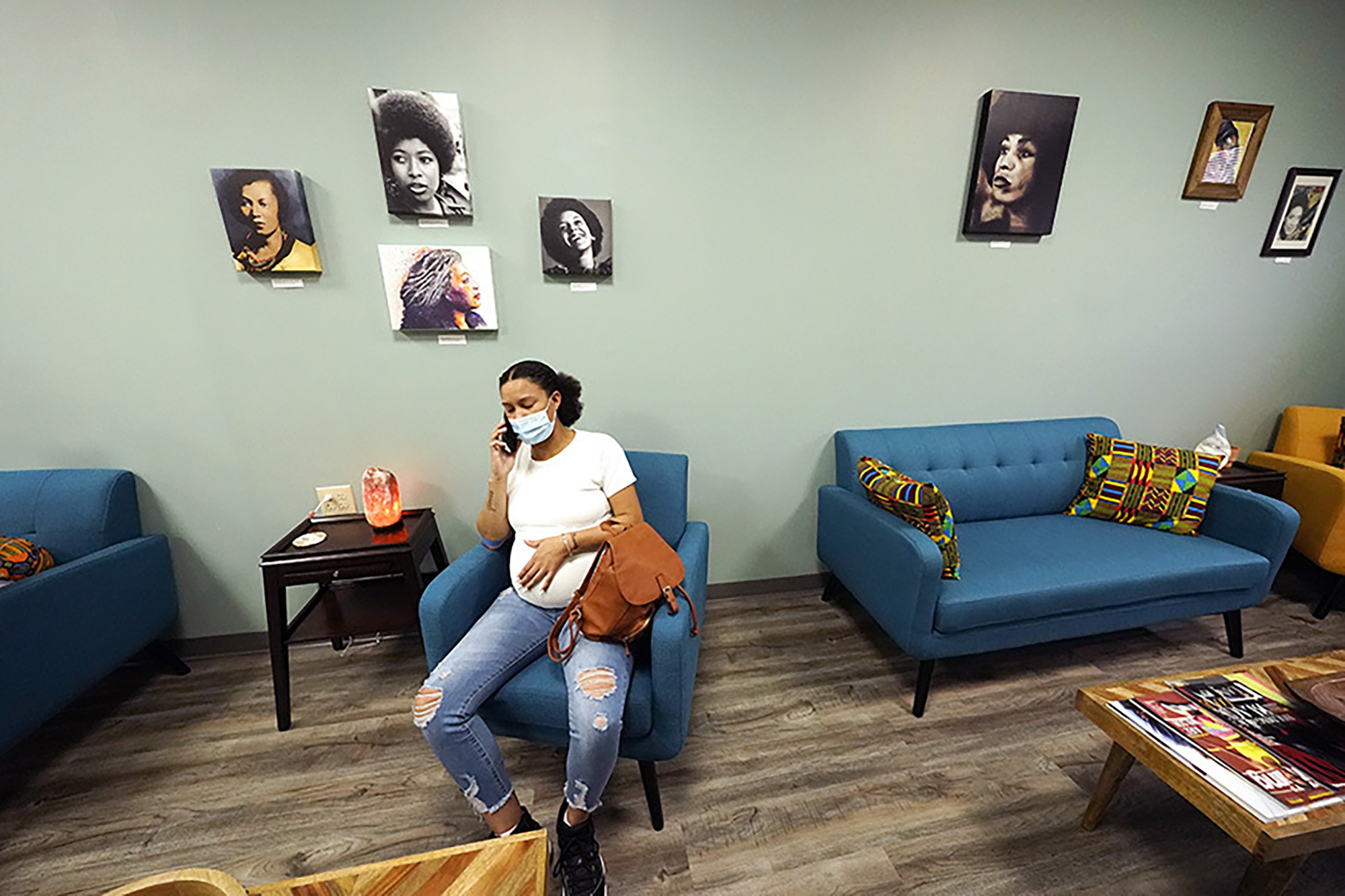 Amid Abortion Debate, Clinic Asks: Who's Caring for Moms?

A Republican Congress, they argue, could try to restrict D.C.’s abortion rights; it has tried before. In 2015, the then Republican-controlled House of Representatives voted to strike down D.C. legislation that protected employees from facing discrimination based on their reproductive health decisions. In 2017, the House voted to prevent D.C. from using local tax revenue to subsidize abortions for low-income women, The Washington Post reported.

Abortion is legal in Maryland. People can choose to terminate a pregnancy until the fetus is considered viable by a doctor.

According to the Guttmacher Institute, Maryland has two notable restrictions on abortions. First, abortions can only be performed after the point of viability if the mother’s life or health is in danger or if the fetus has a genetic defect, serious deformity or abnormality. Second, caregivers of a minor seeking an abortion must be notified.

Maryland voters approved a referendum in 1992 “to prohibit State interference with woman's abortion decision before fetus is viable or, under certain conditions, at any time.”

Gov. Larry Hogan referred to the 1992 referendum in a statement he issued Friday and said he would uphold state laws.

“In 1992, Maryland voters approved a constitutional referendum legalizing and protecting access to abortion as a matter of state law—that measure remains in effect today following the Supreme Court decision in Dobbs v. Jackson. I swore an oath to uphold the Constitution and the laws of Maryland, and that is what I have always done and will continue to do as governor,” Hogan said.

In Montgomery County, the County Council introduced a resolution to protect abortion rights, and County Executive Marc Elrich said he would seek an additional $1 million to “ensure access to abortion, family planning, reproductive and maternal health providers” in the county.

In Virginia, the prospect of Roe being overturned put an even sharper focus on the divided General Assembly and a new governor who has voiced strong opposition to current abortion laws.

The following abortion restrictions are in place in Virginia, according to the Guttmacher Institute:

In an initial statement Friday, Youngkin called himself a “pro-life governor” and said he will “take every action I can to protect life.” His office then said he asked lawmakers to "prioritize protecting life when babies begin to feel pain in the womb, including a 15-week threshold." A 15-week law would constitute a major change in Virginia.

Youngkin told The Washington Post he will aim for a 15-week law but that a 20-week cutoff may be necessary to attract additional support in Richmond. He told the paper he supports exceptions for rape, incest and cases in which the life of the mother is at risk.

With Republicans controlling the Virginia House and Democrats the Senate, lawmakers steered away from trying to make changes in abortion law last session.

The leaked draft Supreme Court opinion overturning Roe v. Wade is sparking conversations about data privacy. If the opinion is released and abortion is criminalized in some states, some reproductive rights groups fear that text messages, search histories, ad tracking data and app usage history could put people who seek an abortion at risk.

Youngkin had avoided talk of any specifics as he reacted to news of the leaked opinion.

“I am pro-life and I have been very clear about that since the day I launched my campaign,” he said in a statement. “While we wait for the final June decision, we will be focused on lowering taxes for Virginians, funding education and law enforcement because we need to get a budget passed.”

Youngkin had said he does support any ruling that would give states full authority to decide on abortion restrictions.

“I do support the fact that this should be a state decision,” Youngkin said. “That state decision is one we’re going to have to work with our legislature on what we do, and as I’ve said, I think that there’s common ground on this.”

Virginia Senate Democrats reaffirmed their promise to be a brick wall against any new restrictions. Sen. Barbara Favola reminded that even if Roe were overturned, current Virginia law protects abortion rights.

“I think women in Virginia need to know that access to abortion care is legal in Virginia,” she said. “We have made it, in some respects, easier to access abortion care.”

And Favola said Democrats will work even harder to make sure Virginia voters understand there would be consequences in 2023 if Republicans regained control of both the House and Senate.

Virginia voters will cast ballots in November 2023 for all 140 House and Senate seats, but action on legislation could come as soon as next session.

There is one Democratic senator who’s indicated he may be open to greater restrictions on abortion.

“It is what the community that I represent wants. The job of the local elected prosecutor is to bring the values of the community to the courthouse," Commonwealth’s Attorney Steve Descano said. News4's Jackie Bensen reports on his guest essay in the New York Times.

In Fairfax County, Commonwealth's Attorney Steve Descano said he would refuse to pursue criminal charges against women who get abortions, regardless of what state law says.

“It is what the community that I represent wants. The job of the local, elected prosecutor is to bring the values of the community into the courthouse,” he told News4.