Some roads were still flooded on Tuesday, hours after Isaias moved out of D.C., Maryland and Virginia

At least three tornadoes hit southern Maryland as Tropical Storm Isaias blew through the Chesapeake Bay and the D.C. area on Tuesday morning, killing one person in Maryland and causing significant flooding and damage.

Two tornadoes touched down in St. Mary's County and another spun through Calvert County, the National Weather Service confirmed.

A trained storm spotter reported seeing one tornado in Leonardtown as the storm raged in St. Mary’s County early Tuesday.

The second tornado was confirmed to have hit Chesapeake Beach in Calvert County.

There, one family told News4 that a severe weather alert spurred them to leave an upstairs bedroom. Fifteen minutes later, a tree smashed through the roof and into that room.

Another woman said six or seven trees fell on her property. 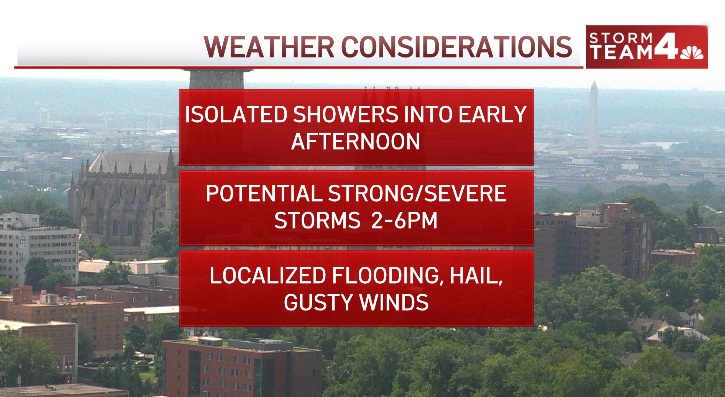 The National Weather Service says it will release more detailed reports on Wednesday.

Isaias has blown north up the Atlantic Coast and away from the Chesapeake Bay, but communities are still coping with flooding and damage.

As of 7:30 a.m. Wednesday, 4,500 SMECO power customers still were waiting for the electricity to get turned back on, mostly in Charles and Calvert counties.

Closer to the D.C. area, Prince George's County had dozens of power outages on Wednesday morning and remained under a flood warning until 9:30 a.m.

News4’s Adam Tuss takes a look at the damage left behind by Tropical Storm Isaias in Chesapeake Beach.

One person was killed in Mechanicscville when a tree fell onto their moving car.

At least five people were rescued near Budds Creek Road, near Colton Point Road, when high water rapidly overtook the road. One person was rescued after their car became stalled in a flooded street, the Seventh District Volunteer Fire Department said.

A tornado hit Chesapeake Beach, toppling trees and causing damage to homes. One resident described to News4 what it was like as the tornado came close to his house.

Firefighters rushed back to the same area after bystanders reported seeing a car swept away. Two civilians who tried to help were rescued from the waters. Two occupants in a car were also pulled into a rescue boat.

Chaptico is one of many communities in St. Mary's dealing with lingering flooding.

News4 spoke with two residents who say they’ve lived in the county all their lives and had never seen worse storm damage there.

"This is just unbelievable," said resident Wanda Smith. "I've never experienced anything like this before. This is just chaotic."

"Never in my life in St. Mary's County have I ever seen this. And I hope I never see it again," Janice Jones said.