Women's March demonstrators climbed a crane on North Capitol Street to call on the Biden administration "to take some definitive action to support and protect abortion access." Other acts of civil disobedience are planned for this summer

People demonstrating in support of abortion rights climbed a construction crane in D.C. on Tuesday and flew a banner.

Activists with Women's March climbed a crane in the 1500 block of North Capitol Street, at P Street.

“Biden, protect abortion,” said a green banner that flew over the neighborhood for more than an hour.

“It felt like a moment to take a bigger stand, a bigger risk, in this moment. We will have throughout the summer some other kinds of disruptive action and civil disobedience,” Middleton said.

On Twitter, Women’s March said, “The Summer of Rage is just starting, and we aren’t going anywhere until abortion access is protected.”

Streets in the area were shut down, and the Metropolitan Police Department and DC Fire and EMS were on the scene. It wasn't immediately clear what charges the activists could face.

President Joe Biden faces pressure to protect abortion rights after the Supreme Court overturned Roe v. Wade on Friday. Sen. Elizabeth Warren and Sen. Tina Smith have urged Biden to declare a public health emergency to help "protect abortion access for all Americans" and unlock "critical resources and authority that states and the federal government can use to meet the surge in demand for reproductive health services." 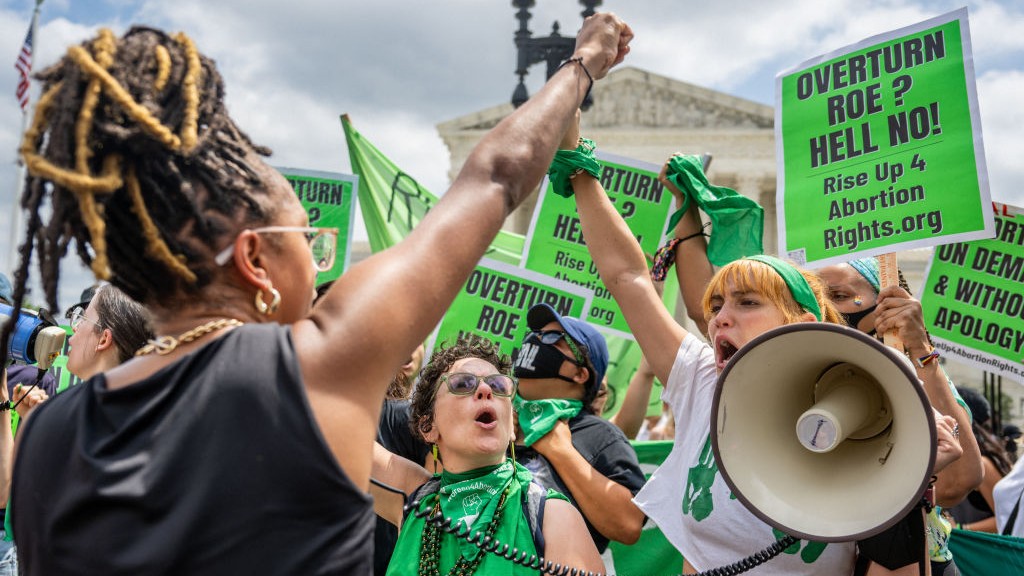 Why Green Became a Symbol of Abortion Rights Fight

An abortion rights demonstrator scaled D.C.’s Frederick Douglass Bridge on Friday and flew a green banner and yellow flag that said “Don’t tread on my uterus.”

Guido Reichstadter descended on Saturday afternoon and was charged with crowding, obstructing and failure to obey, court documents say. He was ordered to stay away from the bridge and Supreme Court.

All of the Supreme Court justices were questioned about their judicial beliefs on the legal precedent of Roe v. Wade during their senate confirmation hearings. Here’s what they had to say.