Support for D.C. statehood is split along party lines

A decades-long movement to reshape the American political map took a further step Thursday as the House of Representatives approved a bill to make the nation's capital the 51st state.

Voting along party lines with minority Republicans in opposition, the House approved the bill 216-208. That's likely the easy part, though. The proposal faces a far tougher fight in the Senate, where simple Democratic control of the chamber won’t be enough. 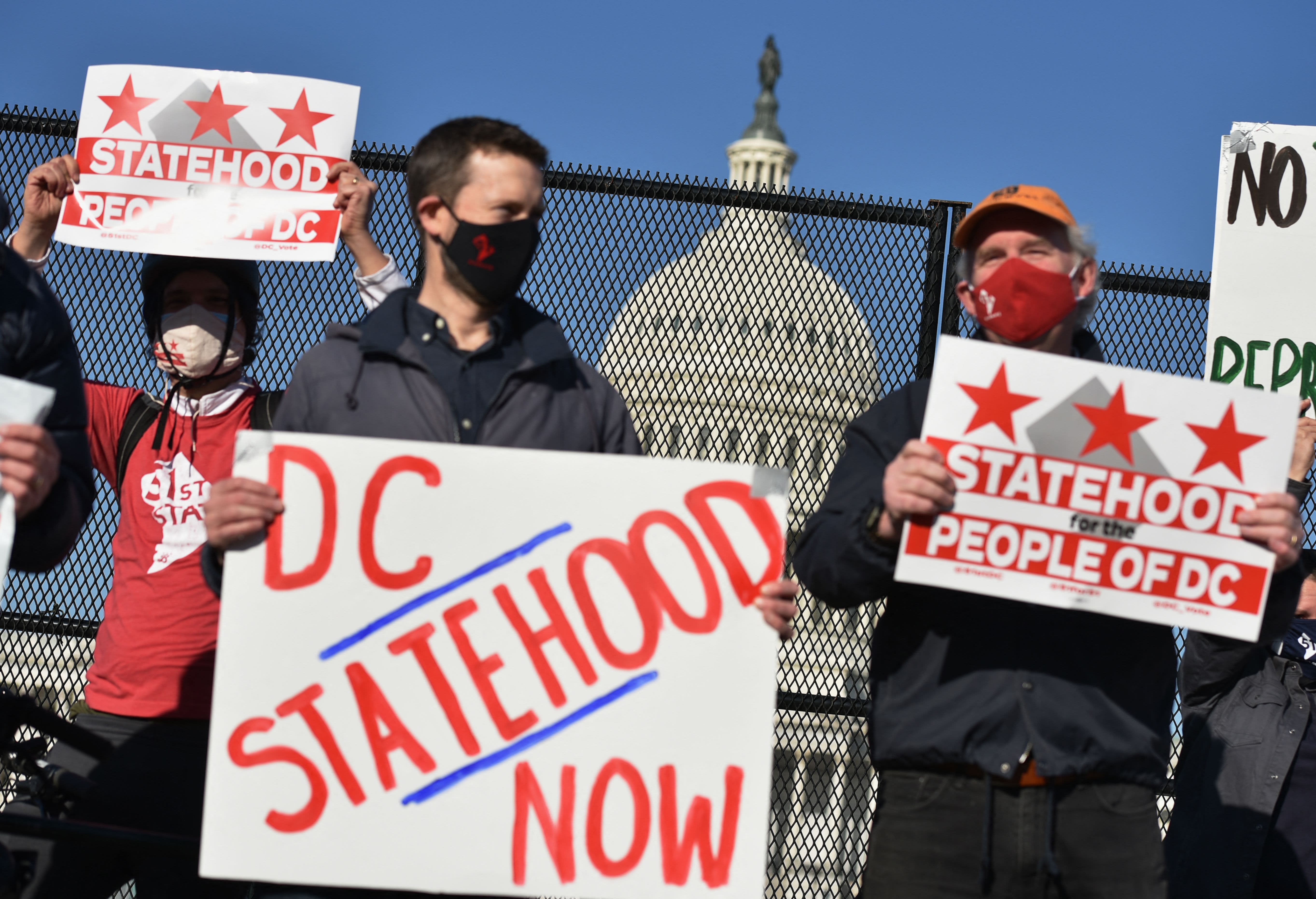 The legislation proposes creating a 51st state with one representative and two senators, while a tiny sliver of land including the White House, the U.S. Capitol and the National Mall would remain as a federal district. Instead of the District of Columbia, the new state would be known as Washington, Douglass Commonwealth — named after famed abolitionist Frederick Douglass, who lived in Washington from 1877 until his death in 1895.

An identical statehood bill passed the House in 2020, but it quickly died in the then-Republican-controlled Senate. Now, with the 2020 elections leaving Democrats in control of both chambers and the White House, Republican senators may resort to a filibuster to stymie the statehood bill.

For lifelong statehood proponents like Eleanor Holmes Norton, Washington's long-serving and nonvoting delegate in the House, Thursday's vote was a culmination of a life's work.

“My service in the Congress has been dedicated to achieving equality for the people I represent, which only statehood can provide," Norton said at a Wednesday news conference. “My life as a third-generation Washingtonian has marched toward this milestone.”

The measure has received strong support from President Joe Biden’s White House, which released a statement Tuesday calling Washington’s current status “an affront to the democratic values on which our Nation was founded.”

The White House praised Washington as worthy of statehood, with “a robust economy, a rich culture, and a diverse population of Americans from all walks of life who are entitled to full and equal participation in our democracy.”

The bill is certain to face GOP pushback, given that the proposed 51st state would be overwhelmingly Democratic. That opposition was on display during Thursday morning's floor debates in advance of the vote.

The country's founding fathers, "never wanted D.C. to be a state and then specifically framed the constitution to say so,” said Georgia Republican Rep. Jody Hice. “This is absolutely against what our founders intended and it ought to be soundly rejected.”

But Virginia Democratic Rep. Gerald Connolly pointed out that Kentucky was once a part of Virginia, and was carved out as a state by a simple act of Congress.

Connolly argued that the federal district was a theoretical concept when first conceived, not a community with a higher population than two U.S. states.

Monday, D.C. Mayor Muriel Bowser made the case for D.C. statehood before a House committee. This is not the first time the District has gotten this close to making it happen. News4's Mark Segraves explains why there is still a long way to go.

During a March hearing by the House oversight committee, a succession of GOP representatives claimed D.C. was unfit for statehood while calling the entire effort a cynical Democratic power play. Opponents proposed a variety of alternatives, from absolving Washingtonians of federal taxes to “retroceding” most of D.C. back into Maryland.

Contenting that Congress lacks the authority to change D.C.'s status is a frequent point of attack against the proposal — even though every state other than the original 13 was admitted to the union via congressional vote. Statehood opponents say D.C. is a special case that requires special steps.

Zack Smith, a legal fellow at the Heritage Institute, a conservative think tank, testified before Congress last month that since D.C.'s creation and limitations are are enshrined in Article I of the Constitution, its status can only be changed through a constitutional amendment. He also argued that D.C. shouldn't be made a state at all and that the Founding Fathers “intended this to be a federal district outside the jurisdiction of any one state.”

If the measure were to become law, Smith predicted a wave of lawsuits that would cloud the new state's actions and any congressional legislation it touched.

“You're basically looking at a lot of litigation,” Smith told The Associated Press. "Every legislative act of this new state would be called into question. ... Things would be in a state of flux for years."

D.C. has long chafed under its relationship with Congress, which has the power to essentially veto or alter any local laws. Its population is larger than that of Wyoming or Vermont and its estimated 712,000 residents pay federal taxes, vote for president and serve in the armed forces, but they have no voting representation in Congress.

The limitations of D.C.'s reality were put in stark relief last summer during a series of protests over the death of George Floyd in Minneapolis and against general police brutality. After a night of widespread vandalism, President Donald Trump usurped D.C. Mayor Muriel Bowser’s authority and called in a massive multiagency federal force to downtown. The law enforcement forces cleared peaceful protesters from a public street so Trump could pose for a photo outside a church.

Ravi Perry, head of Howard University's political science department, said the events of the summer of 2020 were a crucial turning point for the perception of the D.C. statehood push, intertwining the issue with the country's ascendant racial justice movement. As recently as 2018, nationwide polls had shown the majority of Americans to be lukewarm at best on the topic, but those poll numbers changed dramatically in the past two years, he said.

“People have started to see D.C. statehood as the racial justice issue that it is," said Perry, who is also on the board of the pro-statehood group D.C. Vote. “There's been a major sea change, and a lot of that has been motivated by Trumpism.”