Three sons, three brothers, were all gone within three years of each other. The people who shot Kalif Brown, Montray Brown and Paris Brown have not been found

News4 is taking an in-depth look at one of the biggest issues impacting D.C. right now: gun violence. Almost 200 people have already been killed in 2021, with homicides up 13% from last year.

For one Southeast D.C. family, the pain and toll of this violent trend is unlike any other; they lost three sons to gun violence.

"Sometimes I don't have the strength, but I still get up," their mother, Seditra Brown, said.

One early morning, the News4 I-Team met her in a busy alley tucked away near Barracks Row, in front of a large mural.

"This is called the limestone of lost legacy," Brown explained.

Staring out from the wall are the faces of five teenagers, all shot and killed during the school year in 2018.

Paris Brown, a 19-year-old aspiring poet and student at Thurgood Marshall Academy Public Charter High School is one of them.

“It just gives me a safe space to come,” Brown, his mother, said. She visits the mural each July to mark her son’s birthday.

"When I see my son up here, he always said that he wanted to be a young legend,” she said.

She remembers the exact moment she arrived at the scene of Paris' killing in January 2018, on Skyland Place. 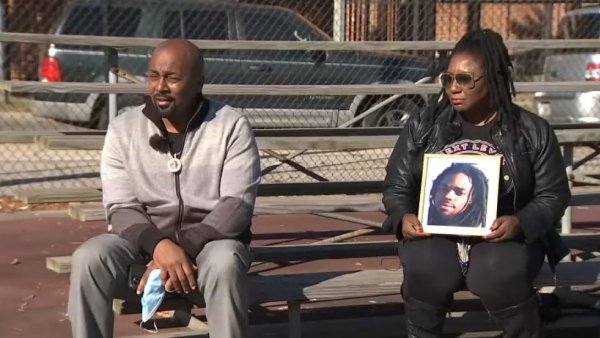 Police found Paris on the sidewalk with multiple gunshot wounds.

"I tried to get over the police line with him to make sure that that was him, and they wouldn't let me through. So, they asked me, did I have a picture of him. I showed him a picture, and they were like, ‘That is him,’” she said.

For this mom, losing her youngest son was just the beginning.

"Montray was a good — a good person. He's a great father, a great son,” she said.

A year later, in April 2019, someone shot and killed her oldest son, Montray, inside a home along Wagner Street.

"I really never registered the death of both for them. I just put it in my mind, like, they away and I'm going to see them again,” Brown said.

Then, this past August, amid the most recent surge in deadly gun violence in the nation's capital, a third devastating loss struck.

“He was my golden child. He thought he was the oldest. He was just so determined,” Brown said.

Her middle son, Kalif, was shot multiple times and killed while in his car along 14th Street.

Three sons, three brothers, were all gone within three years of each other. None of the shooters have been found.

"No suspects. No arrests," their mom said.

A News4 I-Team review of D.C. police records shows that August, the month Kalif died, was the deadliest so far this year, with 23 homicides. Nearly 60% of D.C. homicides remain unsolved this year.

Seditra Brown said she has seen this violence from both sides. Her story shows some of the cycle behind the wave of gun crimes here that can be hard to break.

“All of them have made bad choices in their life. That still don't make them bad people. They're still human beings," she said.

Montray had a history of drug crimes. Kalif served time for a gun crime after pleading guilty to robbery.

Their mother said she has no idea if any of that had connections to their deaths.

“I never would say, ‘Oh, my son did not do this, he did not do that.’ But they just made bad choices in a life. But they still overcame it and still was on the right paths before their death,” she said.

A D.C. police spokesperson told the I-Team the “cases remain open and under investigation.”

How does a mom get through the day after losing three sons?

She’s urging community leaders and parents to find more activities for teens, to keep them busy and occupied, away from crime and guns.

Each time she hears of another senseless killing, it reminds her of what's she lost.

"It's a feeling I get in my chest, that I've been through the same thing,” she said.

This mom said she still finds it difficult to know what to say to someone else who is experiencing a tragedy related to gun violence.

She wants to know who pulled the triggers and took her sons’ lives — and why. One thing this mom doesn’t want is vengeance.

"I will forgive him if I knew who it was,” she said. “I’ve been forgave them. But I want to literally tell them in their face, ‘I forgive you.’”