One of the officers involved has been fired

D.C. Police released body camera footage of a racing crash involving four officers in Northeast. One of the officers has been fired, the department said.

On April 22, two police cruisers with two officers in each car were stopped at Anacostia Avenue at about 5:15 p.m. before they engaged in "a reckless driving incident," police said.

Video shows the officers in one cruiser taking off and driving for around 30 seconds before airbags deploy. 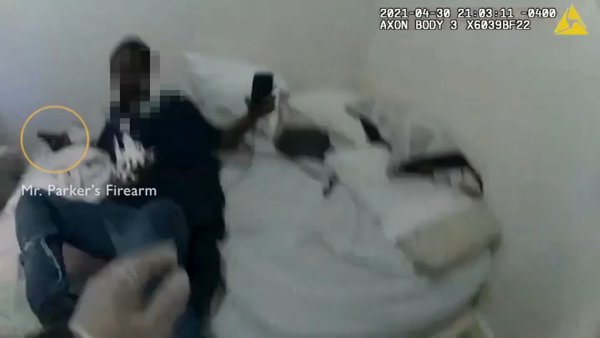 A report released on April 26 said the two cars were traveling south side by side at a “high rate of speed” in a 25 mph zone. The outside driver tried to make a left turn in front of the other car, onto Polk Street NE, and the two collided.

The officers' faces are censored and there is no audio included from before the crash.

Audio is included after the crash, and the officer wearing the body camera can be heard cursing as he gets out of the vehicle and later says he’s “good.”

“Obviously those types of things are unacceptable, they’re embarrassing. It’s not something that we tolerate,” Chief Robert Contee said. “It’s certainly something that I will not tolerate as the chief of the Metropolitan Police Department.”

The department said the officer who was fired was a “probationary employee.” The other three are on a non-contact status pending review by the D.C. attorney general and then the Metropolitan Police Department’s Internal Affairs Bureau.

All officers suffered minor injuries and the cars sustained major damage. D.C. Police did not identify any of the officers.