The Washington Football Team also is celebrating for Chase Young, who was named the NFL’s defensive rookie of the year

Washington Football Team quarterback Alex Smith was deservedly named the NFL's Comeback Player of the Year on Saturday, capping off one of the most remarkable sports recoveries in history.

Although the NFL Honors were held virtually due to the ongoing coronavirus pandemic, Smith still had the chance to deliver a thank-you speech for winning the award.

The 36-year-old spoke for nearly three minutes, emotionally reflecting on his journey over the past two years, while thanking numerous people for their help along the way.

To begin his speech, Smith reflected on his original emotions after suffering the injury, wondering why such a thing happened to him.

"Two years ago, I was sitting in a wheelchair wondering, 'Had the life I had known changed forever?' Anger. Pity. Self-doubt. Why me?" Smith said. "These were feelings I'd had at certain points throughout my career, but this time it wasn't about football. It was bigger. It was about me being a father and playing with my children, a husband to go on walks with my wife, and despite my new limitations, me getting my life back."

Despite an injury that would've likely ended the athletic career for almost anybody else, Smith was determined to return to football from the very beginning.

As he explained on Saturday, though, returning to football meant a lot more than just getting back to playing the sport he loves.

"My goal was football, not because I actually thought it was a reality, but because I knew my life would be better because of it," Smith said. "Fighting the fear surrounding my new leg with the pursuit of something bigger and a life lived without regret. It took 728 days. 728 days of small victories and major setbacks, of countless hours of physical therapy and just as many sleepless nights."

The quarterback then went on to specifically thank his team of doctors, specifically Washington's team doctor, Dr. Robin West and his PT trainer.

During his recovery, Smith went to the Center for the Intrepid in San Antonio, Texas, to rehab with several of the country's wounded warriors. The quarterback's time at CFI was a major turning point in his rehab, something that sticks with him to this day.

"It wasn't until my time at the CFI, a military rehabilitation center, where I truly realized how fortunate I was," Smith said.

"It was an honor of a lifetime to rehab alongside some of our country's bravest, who sacrifice life and limb for us to play a game we all love," he continued. "It was also there where they first put the football back in my hand...To the entire team at CFI, thank you for challenging me and allowing me to dream big again." 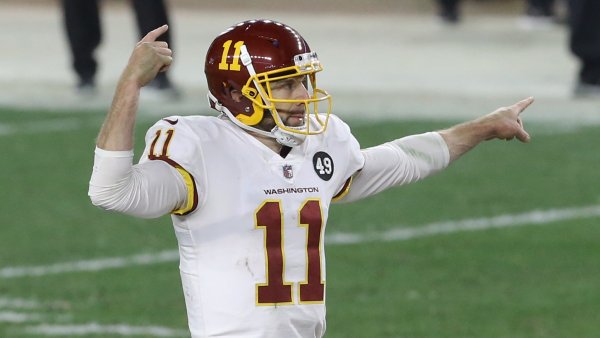 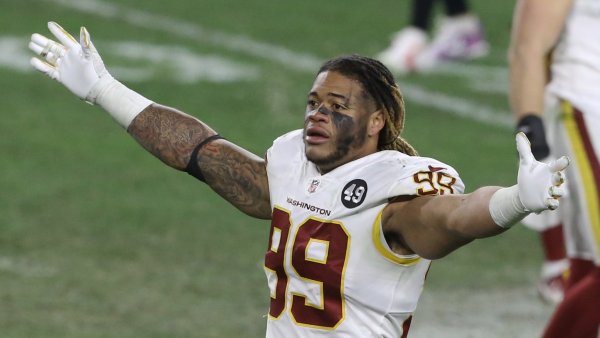 Anybody who followed Smith's recovery knows that the quarterback would not have been able to accomplish everything he has without his wife, Elizabeth. Smith thanked her, as well as his three kids, for their unconditional love and support through it all.

"This has been a road to recovery that I didn't walk alone. I share this award with every single person who has helped me along the way, but none more so than my wife, Elizabeth, and our three kids," Smith said. "I love you more than you could ever know. You have given me motivation, strength and support that I couldn't get anywhere else. I hope that I have made you at least half as proud as you have made me every day."

"To my teammates in the locker room, this past season is something I will cherish forever," Smith said. "Thank you for your encouragement and believing in this old man once again."

To conclude his speech, the 36-year-old had a message for anyone and everyone going through hard times.

"To anyone out there going through hard times, know better days lie ahead," Smith said. "Embrace all that life has to offer. There are no ups without the downs. Honor every single day and remember, just live."

The team also is celebrating for Chase Young, who was named the NFL’s defensive rookie of the year.

This award comes as no surprise to anyone who's had the pleasure of watching the Ohio State product prove that he can dominate at the highest level of the game. His acceptance speech was every bit as graceful as his performance on the field.

"I'd like to thank my family and friends for all the support all season long," the 21-year-old said. "It definitely wasn't the rookie season I expected with the pandemic and everything going on."

In the face of the pandemic and the litany of challenges that stood in his team's way, Young showed no signs of wavering. He played an instrumental role in turning Washington’s 1-5 start into an NFC East title-winning season, recording 7.5 sacks, 10 tackles for loss, four forced fumbles, and a touchdown against San Francisco that proved to be one of the plays of the season.

Go here for the full story on Young’s win.