WASHINGTON -- When the pregame introductions are over and the lights come back on at Capital One Arena, the starters walk to midcourt to tip off the game, and as they do Thomas Bryant often trots out from the locker room to take his place on the bench. Bryant is dressed in regular clothes, as he continues to work his way back from the ACL surgery he had in February.

On Wednesday night, he was joined for the first time by Rui Hachimura. The Wizards' 2019 first round pick walked behind Bryant and past the bench to shake hands with teammates and coaches, a symbolic welcome back for him, as Hachimura was joining his team at a game for the first time this season. 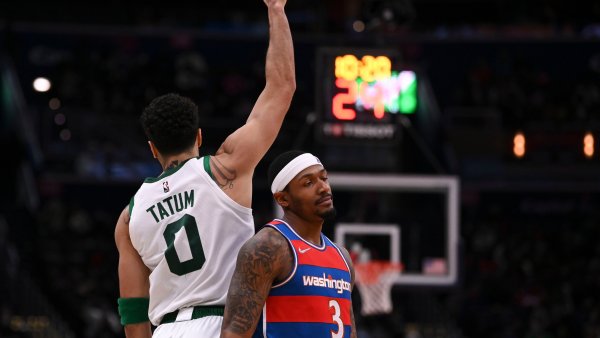 Hachimura, 23, has been out indefinitely due to personal reasons. He arrived in D.C. in early October and was away from the team to quarantine before beginning a slow road back with individual work in practice. He still hasn't progressed much from there.

When Hachimura will be able to actually play in a game remains unclear, but just having him on the bench was an encouraging sign for the Wizards.

"It's tremendous. I think it's not only good for him, it's good for our group because he's one of us," Washington head coach Wes Unseld Jr. said. "To have our group start to take shape and start to be whole, it's just one more step in that direction."

Hachimura has been participating in Wizards' practices and shootarounds, though in a limited capacity. When they recently left town for a four-game road trip, he stayed back to train with their G-League affiliate, the Capital City Go-Go.

At Wednesday's shootaround, Hachimura was in three-point shooting drills with teammates before moving to the other side of the gym to work against coaches. He began by dribbling into the midrange for pull-up jumpers, then moved to the post where he did contact drills with coaches defending him.

"He's been in practice and doing all the things like shootaround and different things like that. It's great, man," Montrezl Harrell said. "It just shows that he's on the right path towards maybe soon being able to get back with us."

The next steps for Hachimura will include 3-on-3 and then 5-on-5 scrimmaging. Once he clears that hurdle, his return could become imminent.

For now, the Wizards are remaining patient with his progress. Though he isn't returning from an injury, they are taking it slow working him back into the mix, citing his conditioning and basketball rhythm.

That incremental process will likely continue with the Wizards and not the Go-Go, Unseld Jr. said before Wednesday's game. That could mean he will travel with the team on their upcoming road swing.

Step-by-step, Hachimura's return is getting closer, slowly but surely.