After a coronavirus outbreak forced them to postpone their opening series and place a chunk of their roster into quarantine, the Nationals have assembled a 26-man opening day roster.

Instead of using those players, the Nationals will kick off their season Tuesday against the Atlanta Braves with a slew of replacements, including Luis García, Jonathan Lucroy, Tres Barrera, Yadiel Hernández, Sam Clay, Ryne Harper, Luis Avilán, Kyle McGowin and Cody Wilson. With four starting position players, their closer and two members of their rotation among those unavailable, the Nationals will rely on their organizational depth to get their season started.

“I truly believe we’re gonna be fine,” manager Davey Martinez said on a Zoom call Monday. “With the guys we got here, these guys were in our alternate site. We believe at some point in time that they were going to help us throughout this year, so it happened to be a little earlier than expected. But they look good. They came up here. I was excited to see them. I know they’re gonna help us.”

Perhaps the most unusual situation is at catcher.

After Gomes and Avila were both ruled out, the Nationals signed free agent Jonathan Lucroy to give themselves a veteran catcher alongside Barrera. Despite not being cleared to join the team until Tuesday, Lucroy will be the Nationals’ opening day backstop and catch Max Scherzer against the Braves. The former All-Star will suit up for his eighth team in his last six seasons; he started for the Boston Red Sox on opening day last year but hasn’t appeared in the majors since. 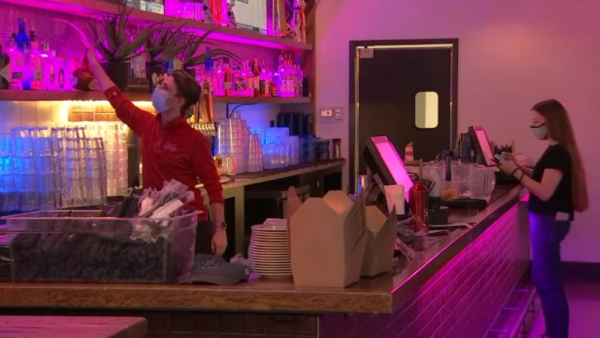 Fans, Businesses Excited Baseball is Back Ahead of Opening Day 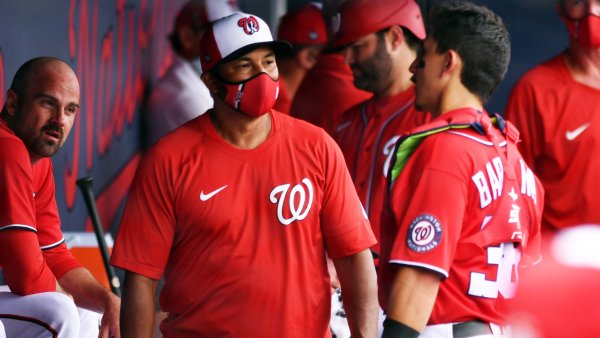 Nationals to Begin 2021 Season on Tuesday Vs. Braves After Coronavirus Outbreak

Scherzer said Monday that he planned to sit down with whatever catcher got the start on Tuesday morning and go over his game plan. Lucroy has never caught Scherzer before, but the right-hander wasn’t worried about that.

“I never really try to get stuck into, ‘I only throw to one catcher,’” Scherzer said. “I don’t like that mentality. I like to be able to think that I can throw to anybody and that any type of catcher I can always work with and be able to go out there, get on the same page with and basically win the game with. So whoever it is tomorrow, that’s great. We’ll do our work and compete at our highest.”

Martinez also confirmed that García would start in place of Harrison at second base. Ryan Zimmerman is expected to handle first-base duties while Trea Turner and Starlin Castro are entrenched at shortstop and third base, respectively.

Zimmerman has the most major-league experience of the group, opening the season as a starter in the Nationals’ lineup every year from 2006 to 2019. After opting out of the 2020 campaign, Zimmerman re-signed with the Nationals on a one-year deal to back up Bell at first base and provide a right-handed bat off the bench. However, the COVID outbreak has thrust him back into a starting job.

“That being said, the role that I have, I have that role for a reason. We’ll see what happens and like I said, I don’t know the timetables…I’m just preparing to play and be ready to go and I don’t think this is gonna be a long, long-term thing. I can play every day for the short term, I’m still capable of doing that.”

In the outfield, Andrew Stevenson will have a chance to get some everyday at-bats in place of Schwarber in left while Victor Robles and Juan Soto hold down their spots. Hernández and Wilson will be the first options off the bench should the Nationals need them.

The sheer number of bats missing from the Nationals’ lineup will put pressure on Soto to settle in quickly and carry their offense until some of their key contributors return.

“We just gotta play as a team,” Soto said. “We always [have] been playing as a team. We just gotta go through it as a team. I know we have some minor-league guys there that they’re gonna be really good because they’ve been showing that since last couple years and I think they’re gonna help the team really well. For me, I’m just going to try to do my job, gonna try to help the team as much as I can. Defense and hitting and everything, in every spot I’m just going to try to do 100% and I’m just gonna ask them to do the same thing and we’re gonna see at the end of the day how the game is gonna finish.”

Washington’s bullpen will be tested as well with Hand and Will Harris (arm) both out to start the season. Save chances will likely go to Daniel Hudson with Tanner Rainey, Wander Suero and Kyle Finnegan in the mix for late-inning work. Left-handers Clay and Avilán competed for a bullpen spot in spring training but ended up at the alternate training site. Now, they’ll have a chance to make an early impact.

Corbin and Lester’s absences from the rotation will be felt Wednesday when the Nationals play a doubleheader to make up for Monday’s postponed game. Stephen Strasburg is scheduled to start one of the two games but Martinez declined Monday to announce who the other starter will be.

The Nationals have a day off Thursday, which could be crucial for allowing some of the close contacts to gain clearance from MLB to re-join the ballclub ahead of its series against the defending World Series champion Los Angeles Dodgers.