‘Here Again': Abortion Activists Rally Across the US on 50th Anniversary of Roe v. Wade

From beach cities to snow-covered streets, abortion supporters rallied by the thousands on Sunday to demand protections for reproductive rights and mark the 50th anniversary of the now-overturned Roe v. Wade U.S. Supreme Court decision that established federal protections for the procedure.

The reversal of Roe in June unleashed a flurry of legislation in the states, dividing them between those that have restricted or banned abortion and those that have sought to defend access. The Women's March, galvanized during Donald Trump’s presidential inauguration in 2017 amid a national reckoning over sexual assaults, said it has refocused on state activism after Roe was tossed.

“This fight is bigger than Roe,” Women’s March said in a tweet. “They thought that we would stay home and that this would end with Roe — they were wrong.”

A dozen Republican-governed states have implemented sweeping bans on abortion, and several others seek to do the same. But those moves have been offset by gains on the other side.

Abortion opponents were defeated in votes on ballot measures in Kansas, Michigan and Kentucky. State courts have blocked several bans from taking effect. Myriad efforts are underway to help patients travel to states that allow abortions or use medication for self-managed abortions. And some Democratic-led states have taken steps to shield patients and providers from lawsuits originating in states where the procedure is banned.

Organizers with the Women's March said their strategy moving forward will focus largely on measures at the state level. But freshly energized anti-abortion activists are increasingly turning their attention to Congress, with the aim of pushing for a potential national abortion restriction down the line.

Sunday's main march was held in Wisconsin, where upcoming elections could determine the state Supreme Court's power balance and future abortion rights. But rallies took place in dozens of cities, including Florida's state capital of Tallahassee, where Vice President Kamala Harris gave a fiery speech before a boisterous crowd. 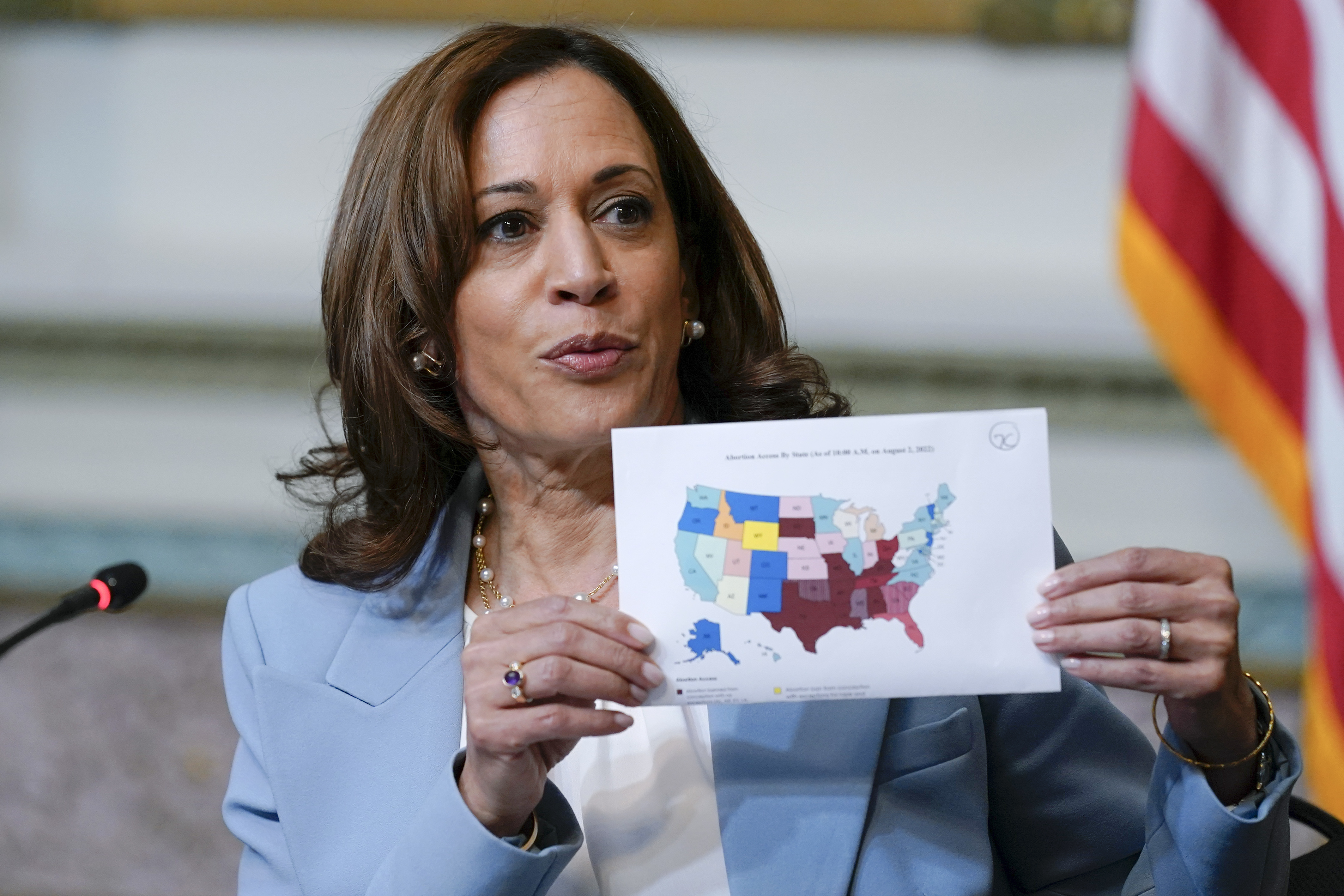 Harris Rallies Against GOP Push to Roll Back Abortion Rights In Madison, thousands of abortion rights supporters donned coats and gloves to march in below-freezing temperatures through downtown to the state Capitol.

“It’s just basic human rights at this point,” said Alaina Gato, a Wisconsin resident who joined her mother, Meg Wheeler, on the Capitol steps to protest.

They said they plan to vote in the April Supreme Court election. Wheeler also said she hoped to volunteer as a poll worker and canvass for Democrats, despite identifying as an independent voter.

“This is my daughter. I want to make sure she has the right to choose whether she wants to have a child,” Wheeler said.

Buses of protestors streamed into the Wisconsin capital from Chicago and Milwaukee, armed with banners and signs calling for the Legislature to repeal the state’s ban.

Eliza Bennett, a Wisconsin OBGYN who said she had to stop offering abortion services to her patients after Roe was overturned, called on lawmakers to put the choice back in the hands of women. “They should be making decisions about what’s best for their health, not state legislatures,” she said.

Roe v. Wade was overturned, so what happens now? The doors of thousands of abortion clinics are now closed, but the impacts of this historic decision go far beyond access to abortion services. ﻿﻿LX News Visual Storyteller Jalyn Henderson breaks down the legal, social and economic impacts we may say as we continue to live in a Post-Roe America.﻿﻿﻿

Abortions are unavailable in Wisconsin due to legal uncertainties faced by abortion clinics over whether an 1849 law banning the procedure is in effect. The law, which prohibits abortion except to save the patient’s life, is being challenged in court.

Some also carried weapons. Lilith K., who declined to provide their last name, stood on the sidewalk alongside protestors, holding an assault rifle and wearing a tactical vest with a holstered handgun.

“With everything going on with women and other people losing their rights, and with the recent shootings at Club Q and other LGBTQ night clubs, it’s just a message that we’re not going to take this sitting down,” Lilith said.

The march also drew counter-protestors. Most held signs raising religious objections to abortion rights. “I don’t really want to get involved with politics. I’m more interested in what the law of God says,” John Goeke, a Wisconsin resident, said.

In the absence of Roe v. Wade's federal protections, abortion rights have become a state-by-state patchwork.

Since June, near-total bans on abortion have been implemented in Alabama, Arkansas, Idaho, Kentucky, Louisiana, Mississippi, Missouri, Oklahoma, South Dakota, Tennessee, Texas and West Virginia. Legal challenges are pending against several of those bans. The lone clinic in North Dakota relocated across state lines to Minnesota.

Bans passed by lawmakers in Ohio, Indiana and Wyoming have been blocked by state courts while legal challenges are pending. And in South Carolina, the state Supreme Court on Jan. 5 struck down a ban on abortion after six weeks, ruling the restriction violates a state constitutional right to privacy.

Wisconsin’s conservative-controlled Supreme Court, which for decades has issued consequential rulings in favor of Republicans, will likely hear the challenge to the 1849 ban filed in June by the state's attorney general, Josh Kaul. Races for the court are officially nonpartisan, but candidates for years have aligned with either conservatives or liberals as the contests have become expensive partisan battles.

Women's rallies were expected to be held in nearly every state on Sunday.

The eldest daughter of Norma McCorvey, whose legal challenge under the pseudonym “Jane Roe” led to the landmark Roe v. Wade decision, was set to attend the rally in Long Beach, California. Melissa Mills said it was her first Women's March.

The Women’s March has become a regular event — although interrupted by the coronavirus pandemic — since millions rallied in the United States and around the world the day after the January 2017 inauguration of Donald Trump.

Trump made the appointment of conservative judges a mission of his presidency. The three conservative justices he appointed to the U.S. Supreme Court — Justices Neil Gorsuch, Brett Kavanaugh and Amy Coney Barrett — all voted to overturn Roe v. Wade.

After the Supreme Court ruling overturning Roe v. Wade, a professor at Howard University wrote an Op-Ed discussing the 13th Amendment as a new plan to protect abortion rights. The amendment could satisfy the more originalist members of the Court and it would center Black people in the fight for abortion rights and bodily autonomy, professor Lisa Crooms-Robinson explains on LX News.

Claire Rush and Harm Venhuizen are corps members for the Associated Press/Report for America Statehouse News Initiative. Report for America is a nonprofit national service program that places journalists in local newsrooms to report on undercovered issues.