Arbery was killed Feb. 23 after a pursuit by a white father and son who armed themselves and gave chase after seeing the 25-year-old black man running in their subdivision

More than two years before he was fatally shot in a Georgia subdivision, Ahmaud Arbery had a tense confrontation in a public park with police officers who attempted to use a stun gun on him after Arbery angrily protested being bothered and refused to let them search his parked car.

“You bothering me for nothing!” Arbery tells one of the Glynn County police officers whose body camera recorded the encounter on Nov. 7, 2017.

Arbery was killed Feb. 23 by a white father and son who armed themselves and gave chase after seeing the 25-year-old black man running down their street. More than two months passed before a video of the killing emerged, sparking an outcry. Gregory McMichael, 64, and Travis McMichael, 34, were then jailed on charges of felony murder and aggravated assault.

Attorneys for Arbery’s parents said Tuesday that the body camera video from 2017 shows Arbery being harassed by the same police department that declined to arrest his killers. The McMichaels were taken into custody after the Georgia Bureau of Investigation took over the case this month.

In the incident report for the 2017 encounter, officer M. Kanago writes that he pulled up behind Arbery’s car parked in an open field at a public park because it was a “known area for drugs and other criminal activity.”

First obtained by The Guardian, the video released Monday shows Arbery repeatedly declining when an officer asks to search his Toyota. A backup officer arrives, and tells Arbery “don’t reach the car” and “keep your hands out your pockets.” This second officer then attempts to use a stun gun as Arbery raises his hands out to his sides. The device just clicks loudly; the officer later says it malfunctioned. Arbery complies with orders to get on the ground, and he goes to his knees.

Two 911 calls made just before the February shooting death of Ahmaud Arbery were released. Gregory McMichael and Travis McMichael were arrested and charged with the murder of Arbery on Thursday.

At the beginning of the encounter, Arbery hands over his driver’s license and asks the first officer on the scene why he’s being bothered. When he’s told that the area is known for drugs, Arbery becomes angry. “Criminal activity? I’m in a f—-ing park! I work! What the f—- you talking about?”

The first officer pats him down looking for weapons. “I’m not searching you. I’m checking you for weapons,” he says, adding: “You don’t have any warrants.”

Absent probable cause or a court-issued warrant, police generally aren’t allowed to search a parked car without permission.

Arbery was not arrested or charged with any crimes. S. Lee Merritt, an attorney for Arbery's mother, said Tuesday that the video showed Arbery being harassed by police.

“The same reason that Ahmaud Arbery was killed was the same reason he was stopped in that park. It was the criminalization of blackness itself," Merritt said at a news conference. "They saw a black man alone in the park and said, ‘You know what, this appears suspicious.’” 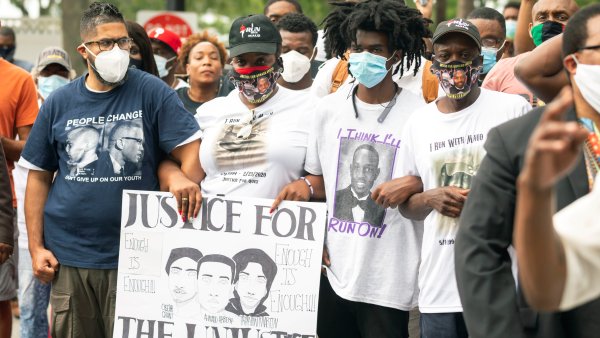 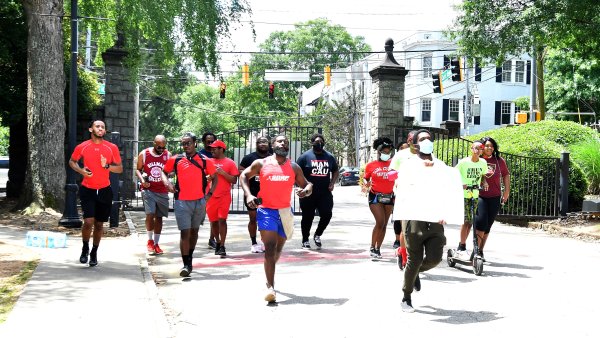 Officer Brandon Kondo, a Glynn County police spokesman, said the department “is not issuing any statements regarding the Ahmaud Arbery case, or previous interactions.” He referred any questions to the Georgia Bureau of Investigation, which is handling the shooting investigation.

In the police report, the first officer on the scene wrote that as Arbery, bare-chested beneath an open coat, became angry, “I observed veins popping from his chest which made me feel that he was becoming enraged and may turn physically violent toward me.”

As the officer calls for backup, the body camera video shows Arbery shouting at him: “You hit me with that s—-, bitch, you gonna be f——— up!”

After police try to stun him, Arbery and the officers seem to calm down. On his knees, Arbery says: “So in the park chilling, then, that’s a crime?”

“Well, when it’s way back here ... it’s kind of weird,” one of the officers replies on the body camera footage. “We don’t see cars sitting out here that often.”

Protesters marched through the Satilla Shores neighborhood of Brunswick, Georgia Tuesday, demanding justice for an unarmed black man shot to death while jogging. Demonstrators carried signs chanting "I run with Maud" as they demanded justice for 25-year old Ahmaud Arbery.

The officers let Arbery go about eight minutes after the encounter began. But he's told he can’t drive off in his car because he has a suspended license. He walks away.

Two law enforcement experts who reviewed the video for The Associated Press said they saw no blatant abuses by the officers. It’s possible the attempt to stun him was justified by Arbery’s aggressive behavior, though his anger also seems understandable, said Nirej Sekhon, a Georgia State University law professor who studies policing.

“He’s there in the park and if we take him at his word — and there’s no reason not to — he’s trying to have a moment to himself and being questioned by police is aggravating,” Sekhon said.

Maria Haberfeld, a professor at John Jay College of Criminal Justice in New York, said she would have liked to see the officers act a bit more “calm and collected,” but added that “they acted by the book.”

Police also released video Tuesday of Arbery’s Dec. 1, 2017, arrest outside a Brunswick Walmart store on shoplifting charges. The video shows Arbery being ordered to lie face-down while being handcuffed. Court records show Arbery pleaded guilty to trying to steal a television and was sentenced to five years on probation.