The blast killed at least 135 people, injured more than 5,000 and caused widespread destruction

Residents of Beirut vented their fury at Lebanon's leaders Thursday during a visit by French President Emmanuel Macron, blaming them for the deadly explosion that ravaged the capital. Shouting, “Revolution!” they crowded around the visiting leader who promised to press the politicians for reform.

For many Lebanese, Tuesday’s giant blast was the last straw after years of corruption and mismanagement by a political elite that has ruled for decades.

The blast, which killed more than 130 people, wounded thousands and left tens of thousands homeless, is believed to have been caused when a fire touched off a stockpile of 2,750 tons of highly explosive ammonium nitrate that authorities left sitting in a warehouse for years — despite a customs official’s repeated warnings.

Dr. Israa Seblani was posing for a photographer and videographer in a town square in Beirut when Tuesday’s explosion occurred.

Macron visited the devastated port and toured a hard-hit neighborhood lined with heavily damaged buildings. A crowd gathered around him and shouted their anger, chanting, “Revolution!” and “The people want to bring down the regime!” — slogans used at mass protests last year.

Macron told them he would speak to Lebanon’s political leaders.

“I will propose to them a new political pact this afternoon," he said. "I will be back on the first of September and if they can’t do it, I will keep my responsibility toward you.” 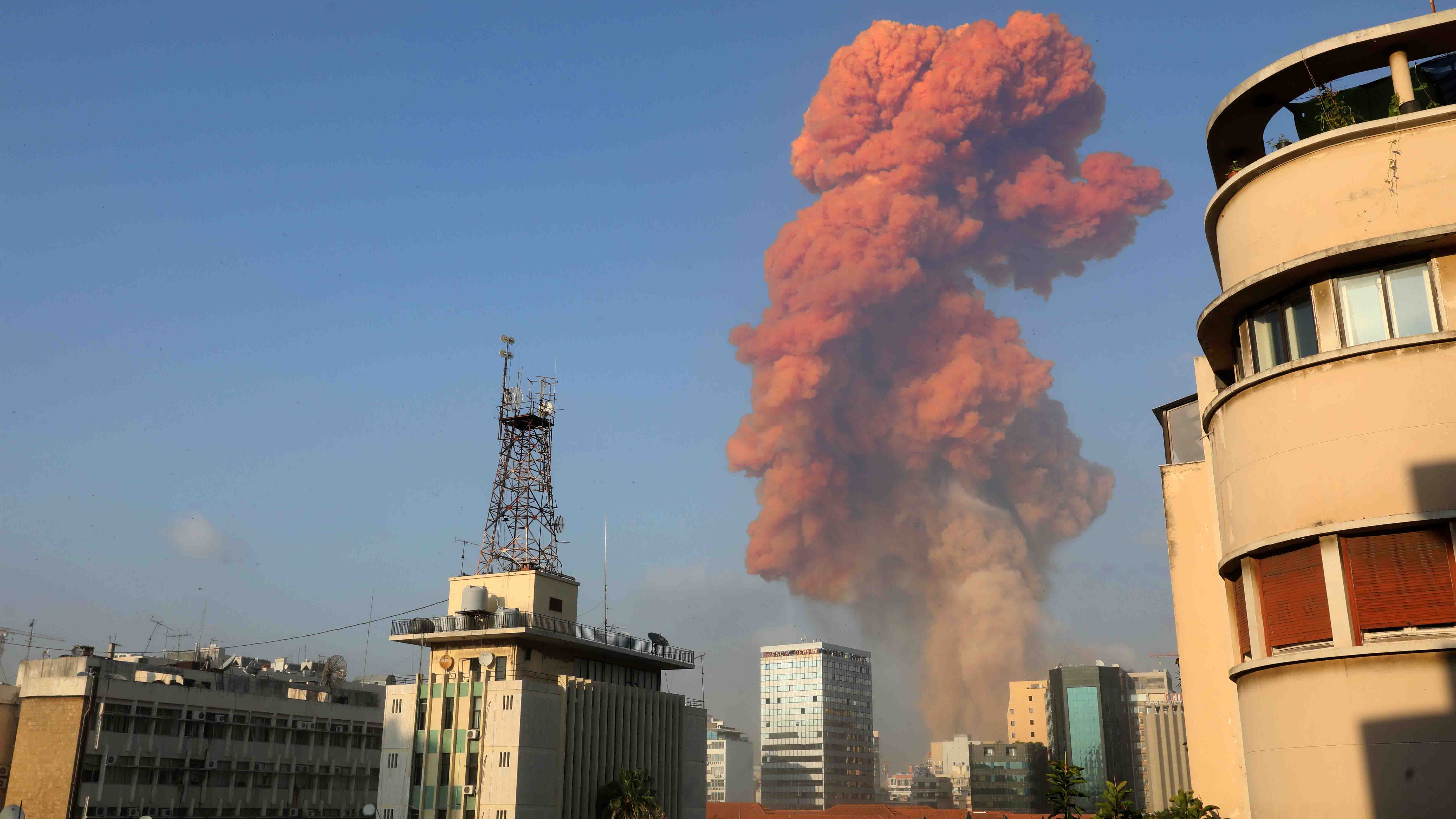 He also promised that French aid would be given out with transparency and “will not go into the hands of corruption.” France once governed Lebanon as a protectorate and maintains close ties.

Elsewhere, he said his visit was “an opportunity to have a frank and challenging dialogue with the Lebanese political powers and institutions.” France will work to coordinate aid, he said, but warned that “if reforms are not made, Lebanon will continue to sink.”

There have been widespread pledges of international aid to Lebanon, but the country has been mired in a severe economic crisis and faces a daunting challenge in rebuilding. It’s unclear how much support the international community will offer the notoriously corrupt and dysfunctional government.

Video taken from above the city of Beirut shows the destruction after a massive explosion in the city.

Losses from the blast were estimated by Beirut Gov. Marwan Abboud to be between $10 billion to $15 billion, who said nearly 300,000 people are homeless.

The disaster may also have accelerated the country’s coronavirus outbreak, as thousands flooded into hospitals. Tens of thousands have had to move in with relatives and friends after their homes were damaged, further raising the risks of exposure.

The head of Lebanon’s customs department, meanwhile, confirmed in an interview with LBC TV on Wednesday that officials had sent five or six letters over the years to the judiciary, asking that the ammonium nitrate be removed because of its dangers.

The Beirut Explosion in Pictures

Badri Daher said all he could do was alert authorities to its presence, saying even that was “extra work” for him and his predecessor. He said the port authority was responsible for the material, while his job was to prevent smuggling and collect duties.

The judiciary and the port authority could not immediately be reached for comment. The government said Wednesday an investigation was underway and that port officials have been placed under house arrest.

Lebanon was struggling with a severe economic downturn and the pandemic before a massive explosion of ammonium nitrate devastated the city of Beirut. Paul Mihailidis is an associate professor at Emerson University who also works summers as a professor at Lebanese American University in Beirut. He joined LX News to discuss the many challenges the country now faces and the help it needs.

The ammonium nitrate, a highly explosive chemical used in fertilizers, had been stored at the port since it was confiscated from a ship years earlier. Based on the timeline and the size of the cargo, that ship could be the MV Rhosus. The ship was initially seized in Beirut in 2013 when it entered the port due to technical problems, according to lawyers involved in the case. It came from the nation of Georgia, and had been bound for Mozambique.

The stockpile is believed to have detonated after a fire broke out nearby in what appeared to be a warehouse holding fireworks. Daher, the customs official, said he did not know if there were fireworks near the site.

Another theory is that the fire began when welders were trying to repair a broken gate and a hole in the wall of Warehouse 12, where the explosive material was stored. Local news reports say the repairs were ordered by security forces who were concerned about theft.

Security officials have declined to comment during the investigation. Port officials have rejected the welding theory in interviews with local media, saying the work had been completed long before the fire broke out.

Lebanon’s various political factions, including the Iran-backed Hezbollah militant group, have ruled the country since the 1975-1990 civil war. Almost all the country’s public institutions are divided up among the factions, which use them as patronage generators for themselves and their supporters. Little actual development is put into the institutions and anything that requires joint action often becomes mired in bickering. As a result, even basic services like electricity and trash collection are in a shambles.

The tiny Mediterranean country is beset by soaring unemployment and a financial crisis that has wiped out people’s life savings. Hospitals were already strained by the coronavirus, and one was so badly damaged by the blast it had to treat patients in a nearby field.

Dr. Firas Abiad, director general of Rafik Hariri University Hospital, the public hospital leading the coronavirus fight, said he expects an increase in cases in the next 10 to 15 days linked to crowding at hospitals and blood donation centers after the blast.

Authorities had largely contained the outbreak by imposing a sweeping lockdown in March and April, but case numbers have risen recently. A renewed lockdown was to take effect this week but was canceled after the explosion. The country has reported more than 5,400 coronavirus cases and 68 deaths since February.

“There is no doubt that our immunity in the country is less than before the explosion and this will affect us medium- to long-term,” Abiad said. “We desperately need aid, not only us but all hospitals in Lebanon.”

The explosion was the most powerful blast ever seen in the city, which has survived decades of war and conflict. Several city blocks were left littered with rubble, broken glass and damaged vehicles.

Authorities have cordoned off the port itself, where the blast left a crater 200 meters (yards) across and shredded a large grain silo, emptying its contents into the rubble. Estimates suggested about 85% of the import-reliant country’s grain was stored there.