The measure is almost certain to stall in the evenly split Senate, where most Republicans would likely block it

In a robust but lopsided debate, Democrats argued intensely and often personally in favor of enshrining marriage equality in federal law, while Republicans steered clear of openly rejecting gay marriage. Instead leading Republicans portrayed the bill as unnecessary amid other issues facing the nation.

Tuesday's election-year roll call, 267-157, was partly political strategy, forcing all House members, Republicans and Democrats, to go on the record. It also reflected the legislative branch pushing back against an aggressive court that has raised questions about revisiting other apparently settled U.S. laws.

Wary of political fallout, GOP leaders did not press their members to hold the party line against the bill, aides said. In all, 47 Republicans joined all Democrats in voting for passage.

“For me, this is personal,” said Rep. Mondaire Jones, D-N.Y., who said he was among the openly gay members of the House.

“Imagine telling the next generation of Americans, my generation, we no longer have the right to marry who we love,” he said. “Congress can't allow that to happen.”

While the Respect for Marriage Act easily passed the House with a Democratic majority, it is likely to stall in the evenly split Senate, where most Republicans would probably join a filibuster to block it. It's one of several bills, including those enshrining abortion access, that Democrats are proposing to confront the court's conservative majority. Another bill, guaranteeing access to contraceptive services, is set for a vote later this week.

House GOP leaders split over the issue, with Minority Leader Kevin McCarthy and Whip Rep. Steve Scalise voting against the marriage rights bill, but the No. 3 Republican Rep. Elise Stefanik of New York voting in favor.

In a notable silence, Senate Republican leader Mitch McConnell declined to express his view on the bill, leaving an open question over how strongly his party would fight it, if it should come up for a vote in the upper chamber.

Key Republicans in the House have shifted in recent years on the same-sex marriage issue, including Rep. Liz Cheney of Wyoming, who joined those voting in favor on Tuesday.

Said another Republican, Rep. Nancy Mace of South Carolina, in a statement about her yes vote: “If gay couples want to be as happily or miserably married as straight couples, more power to them.”

Polling shows a majority of Americans favor preserving rights to marry, regardless of sex, gender, race or ethnicity, a long-building shift in modern mores toward inclusion.

A Gallup poll in June showed broad and increasing support for same-sex marriage, with 70% of U.S. adults saying they think such unions should be recognized by law as valid. The poll showed majority support among both Democrats (83%) and Republicans (55%).

Approval of interracial marriage in the U.S. hit a six-decade high at 94% in September, according to Gallup.

Ahead of Tuesday's voting, a number of lawmakers joined protesters demonstrating against the abortion ruling outside the Supreme Court, which sits across from the Capitol and remains fenced off for security during tumultuous political times. Capitol Police said among those arrested were 16 members of Congress.

“The extremist right-wing majority on the Supreme Court has put our country down a perilous path,” said Rep. Mary Gay Scanlon, D-Pa., in a floor speech setting Tuesday’s debate in motion. 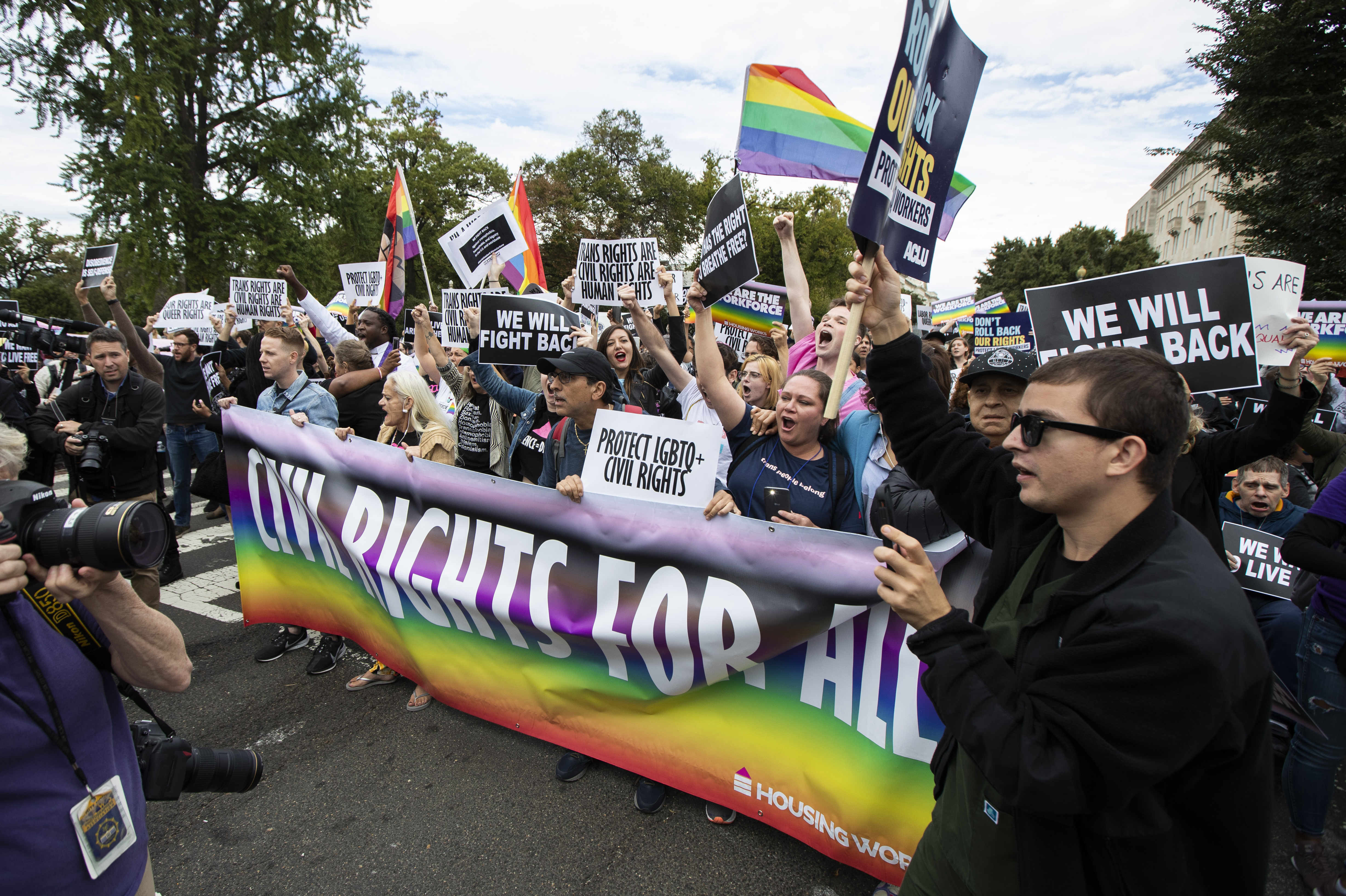 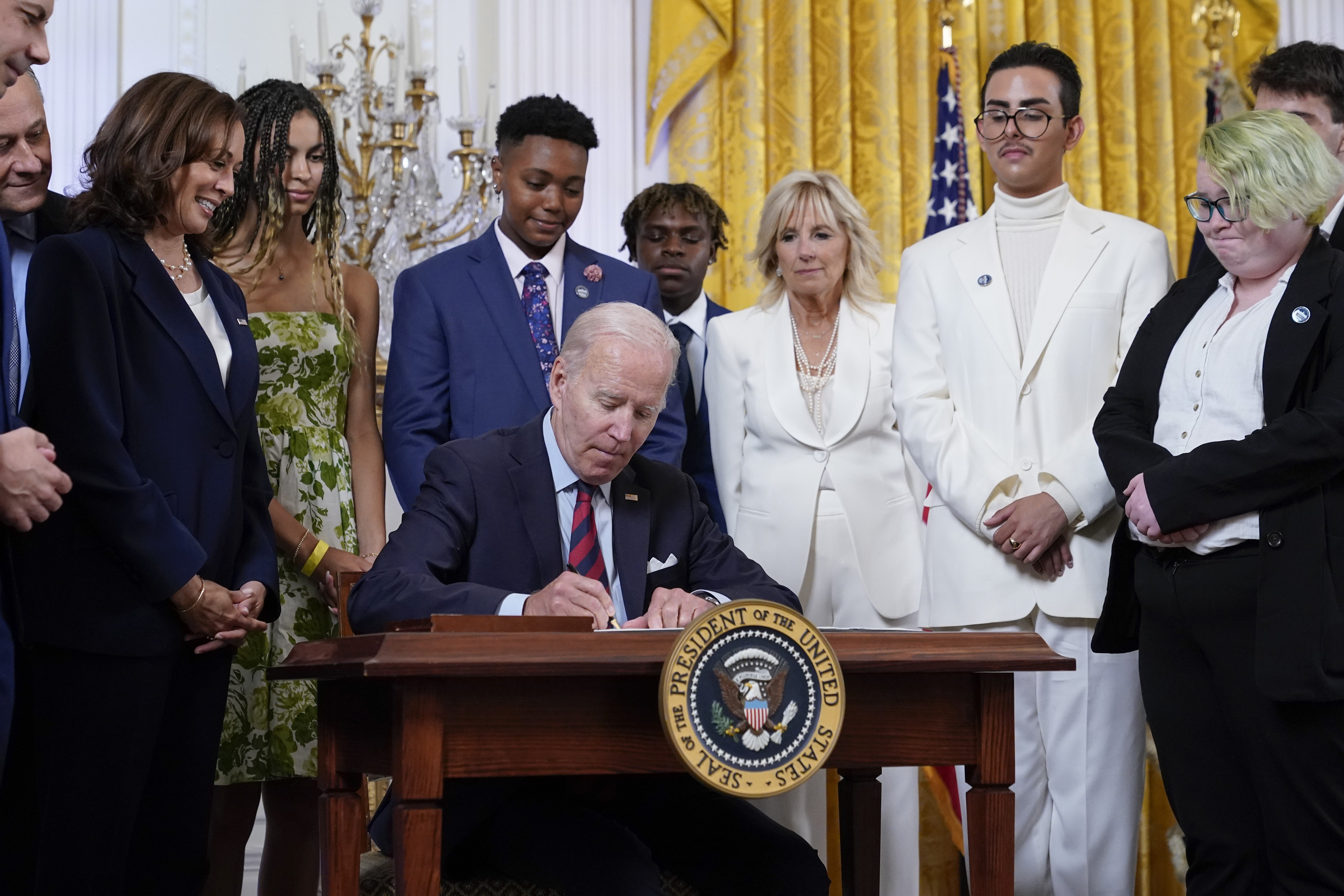 “It’s time for our colleagues across the aisle to stand up and be counted. Will they vote to protect these fundamental freedoms? Or will they vote to let states take those freedoms away?”

But Republicans insisted the court was only focused on abortion access in June when it struck down the nearly 50-year-old Roe v. Wade ruling, and they argued that same-sex marriage and other rights were not threatened.

In fact, almost none of the Republicans who rose to speak during the debate directly broached the subject of same-sex or interracial marriage.

That same tack could be expected in the Senate.

Sen. Josh Hawley, R-Mo., said, “The predicate of this is just wrong. I don’t think the Supreme Court is going to overturn any of that stuff.”

As several Democrats spoke of inequalities they said they or their loved ones had faced in same-sex marriages, the Republicans talked about rising gas prices, inflation and crime, including recent threats to justices in connection with the abortion ruling.

For Republicans in Congress the Trump-era confirmation of conservative justices to the Supreme Court has fulfilled a long-term GOP goal of revisiting many social, environmental and regulatory issues the party has been unable to tackle on its own by passing bills that could be signed into law.

The Respect for Marriage Act would repeal a law from the Clinton era that defines marriage as a heterogeneous relationship between a man and a woman. It would also provide legal protections for interracial marriages by prohibiting any state from denying out-of-state marriage licenses and benefits on the basis of sex, race, ethnicity or national origin.

The 1996 law, the Defense of Marriage Act, had basically been sidelined by Obama-era court rulings, including Obergefell v. Hodges, which established the rights of same-sex couples to marry nationwide, a landmark case for gay rights.

In a draft Supreme Court opinion on Roe v. Wade, Justice Samuel Alito argues that rights need to be "deeply rooted in the nation's history and tradition" to be protected. "If that's their approach, then the right to contraception might equally be seen as 'not deeply rooted in our nation's history and tradition,'" says Caroline Mala Corbin, a University of Miami law professor.

But last month, writing for the majority in overturning Roe v. Wade, Justice Samuel Alito argued for a more narrow interpretation of the rights guaranteed to Americans, noting that the right to an abortion was not spelled out in the Constitution.

In a concurring opinion, Justice Clarence Thomas went further, saying other rulings similar to Roe, including those around same-sex marriage and the right for couples to use contraception, should be reconsidered.

While Alito insisted in the majority opinion that “this decision concerns the constitutional right to abortion and no other right,” others have taken notice.

“The MAGA radicals that are taking over the Republican Party have made it abundantly clear they are not satisfied with repealing Roe,” said Senate Majority Leader Chuck Schumer, D-N.Y., referring to Trump's backers.

He pointed to comments from Sen. Ted Cruz, R-Texas, who said over the weekend that the Supreme Court’s decision protecting marriage equality was “clearly wrong” and state legislatures should visit the issue.

But Schumer did not commit to holding a vote on the marriage bill.