Four Years on, Some Latino Republicans Still Embrace Trump, Others Work for His Defeat

Charges of lies and racism line up against fears of socialism

Jacob Monty, a Houston-based lawyer, was firmly behind President Donald Trump at the start of Trump’s 2016 campaign, sure that the deportation threats were just that and hopeful that as a fellow Republican, Trump might be the one to finally succeed at revamping immigration laws.

Trump could be to immigration reform what President Richard Nixon was to relations with China, he thought, and as a member of Trump’s National Hispanic Advisory Council, he met with the future president at Trump Tower in New York City and left encouraged. Then came the speech in Phoenix, Arizona, two months before the election when Trump made clear that targeting Latino immigrants was central to his campaign.

"I realized I had been lied to," Monty said this week.

Biden: We'll ‘Manage the Hell' Out of Feds' COVID Response

This year, the lifelong Republican who could not bring himself to vote for Hillary Clinton in 2016, choosing the Libertarian Party candidate instead, is going all out for the Democratic nominee, Joe Biden. Monty said he has donated to the Biden campaign, raised money for the former vice president and will vote for him.

"So much has happened in four years," Monty said. "I was sorry I was right. I was always hoping Trump would pivot to the center but instead he’s doubled down."

On immigration, Trump stayed where he began, famously denigrating Mexicans in the opening of his campaign with the statement: "They’re bringing drugs, they’re bringing crime. They’re rapists and some, I assume, are good people."

Despite his comments, 28% of Latinos voted for him in 2016, a percentage point ahead of the vote for Mitt Romney in 2012 and three points behind John McCain in 2008.

Four years ago Monty was one of a group of Republican Latinos who spoke to NBC about their attitude toward a candidate whose signature issue was building a wall between the United States and Mexico. Their stances were as complicated as current polling that shows Trump drawing favorable reviews from about one third of Latinos, men in particular who like his economic policies and brash behavior, as NPR reported earlier this month.

NBC checked back in with Monty and other Latino Republicans about their reactions to Trump’s first term as the 2020 campaign winds up and Trump lags behind Biden in national polls and in some key swing states. Early voting is drawing record numbers to the polls as an unusually energized electorate stands in long lines despite the coronavirus pandemic.

Cuban Americans in South Florida have historically voted Republican. The demographic, which still has fresh memories of Fidel Castro’s repressive regime, has largely backed Republicans, whom they believed would hold a firm line against communism. But that trend is changing among younger Cuban Americans.

The most visible of the Republicans is Mike Madrid, a political consultant from California and a co-founder of The Lincoln Project, a group of GOP operatives who are producing searing ads that hit hard at Trump and his administration’s policies, or lack thereof in the case of the coronavirus pandemic. One ad, “Cruel,” opens with a now iconic photo of a small girl in a bright pink jacket crying as she and her mother is detained by immigration officials.

"Trump’s plan was to crush immigrant children, tearing them from their parents’ arms, locking them in cages," a woman narrates. "That was the plan from the start. Now 545 children are alone in the world."

The ad takes aim at the Trump administration's "zero tolerance" family separation policy that court documents filed last week reveal the U.S. government lost track of the parents of 545 children. About two-thirds of those parents were deported to Central America, NBC News reported.

Four years ago, Madrid, a partner at the public relations firm Grassroots Lab, said he worried that Trump would drive Latinos from the Republican party for a generation, a lost opportunity because although as a group they are overwhelmingly Democratic, Hispanics helped Republicans win some congressional races in 2014 and could be a fit with conservative social values.

This month, in an article titled "What Democrats Don’t Understand About Latino Voters" in The Atlantic, Madrid wrote: "That some Latinos might keep the presidency in Trump’s hands is almost unthinkable to those, including me, repelled by Trump’s attacks on people in our community."

The former political director of the California Republican party argues that analysts repeatedly underestimate the political diversity among American Latinos, not just among Cuban Americans long loyal to the GOP but also among younger U.S.-born Mexican Americans. While Biden leads with Latinas by 34 percentage points, with Latino men his advantage plummets to only 8 points, according to New York Times/Siena College polling. A Pew Research Center poll shows greater confidence in Biden among Latinos to tackle key problems such as the coronavirus pandemic. 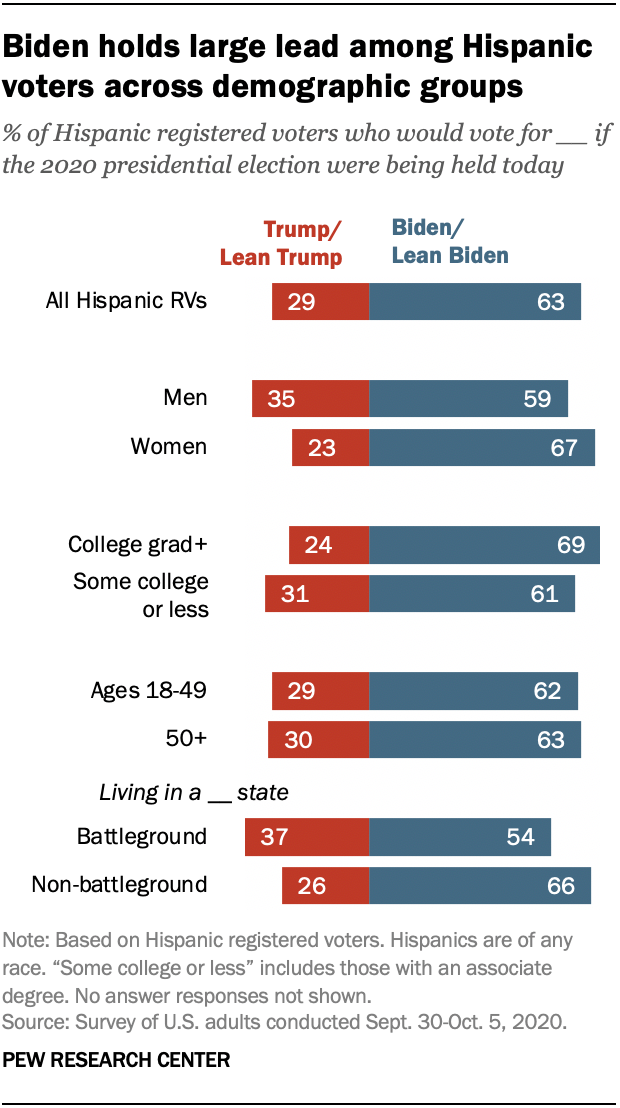 In Florida, Cuban Americans in Miami-Dade County in particular are responding to the Trump-driven specter of socialism under Democrats, Madrid said. Puerto Ricans on the other hand are angry about the federal government’s response to Hurricane Maria and the disaster it brought to the island.

And although Mexican Americans, the largest segment of Latino voters, are mostly anti-Republican, U.S.-born Mexican American men without college degrees are mirroring the trend among white men in the Rust Belt and supporting Trump, according Madrid, citing polling by Equis Research. They likely are driven by the same factors: a lack of economic opportunity, alienation from the political system and a lack of confidence in American institutions to make things better for the next generation. But while white voters are held in Trump’s corner by white identity politics, that is not the case for Hispanics, Madrid said.

"Once they are confronted with a cultural choice, racial choice, ethnic choice, they will come back, they will fall back into a traditional Hispanic voting pattern and that’s what they appear to be doing," he said, citing polling by Univision.

For the first time this year, Latinos are expected to outnumber Black voters as the second largest racial or ethnic voting bloc in America.

The Peruvian-American Aragón family belongs to one of the fastest growing voter blocs in America: the Latino vote. But this important demographic also has one of the lowest voter turnout rates in the country.

If Madrid and Monty are at one end "never Trumpers," or "nunca Trumpers" in Spanish, Ron Garcia, the former mayor of Brea City in Orange County, California, is at the other. A member of the National Association of Latino Elected Officials, he has found Trump’s presidency to be less divisive than feared. In 2016, he said that the rhetoric coming from the Republican party was alienating Hispanics and uniting them in opposition to Trump although he thought a Trump presidency could benefit Latinos, especially in terms of jobs.

Four years later, he said, veterans of which there are many in the Hispanic community seem pleased with changes at the Veterans Administration hospitals.

Trump has repeatedly claimed credit for one program, Veterans Choice, which makes it easier for veterans to go to a private doctor, but numerous fact checkers have pointed out that the change was made under the Obama administration and expanded under Trump.

Latinos like the conservative additions to the U.S. Supreme Court, Garcia said, and because illegal immigration has slowed, "it is not a big cause celebre." The coronavirus pandemic has nearly halted labor migration across the U.S.-Mexico border.

Undocumented immigrants and DACA recipients are not eligible to vote in U.S. elections. But in Chicago, young immigrants like Esmeralda Montesinos and Giselle Rodriguez are joining citizens in efforts to ensure Latino immigrants who are now citizens show up at the polls.

He is not swayed by photos of children in cages, the separation of families or news that 545 children are now in the United States on their own but has been persuaded by the Republican responses: The cages were built by the Obama administration, the families are separated because the adults were caught doing something illegal and some of the children likely did not cross the border with their parents.

Art Martinez de Vara, a lawyer and party leader who lives in rural South Texas, said Latinos have prospered during the Trump administration, whether from the $1.5 trillion tax law passed in 2017, Trump’s embrace of the oil and gas industry or low unemployment before the coronavirus pandemic.

"Where I live, he’s very popular among Latinos, Anglos, everybody," he said. "I do know that among those who don’t like him, they really don’t like him."

He sees strong support for Trump also because of what he called the Democratic party’s sympathies toward socialism — for the embrace of Rep. Alexandria Ocasio-Cortez of New York, who describes herself as a democratic socialist along the lines of Scandinavian countries, the unwinding of Trump’s tax plan or universal health care.

"The family members we have in Mexico are very fearful of what’s going on over there and that’s why people come to America," he said.

People in South Texas have mixed feelings about illegal immigration and although Martinez de Vara would not say that Trump had halted the problems the communities were facing, among them cartels selling drugs over the border and would-be immigrants running across their property, they have receded significantly.

"He’s very polarizing," he said of Trump. "He’s a brash New Yorker, talks big, says things that a lot of people wouldn’t say themselves, but when it came down to the policies that were implemented over the last four years a lot of people are in a much better place."

For Monty, any differences he might have with Biden are insignificant compared to the disdain he feels for Trump.

He said he is angry about the way Trump disparaged the military, his threats to lock up his political enemies, his separation of children from their parents and his reference to Haiti and some African nations as "shit-hole countries." Trump is a racist who believes Latinos are subhuman, he said.

"For Hispanic Republicans, there is no room for us in a Trump party," he said.