An already-incomplete set of the ranked choice voting results was released Tuesday, and then withdrawn, because 135,000 test ballots were included in the count

The Democratic primary for mayor of New York City was thrown into a state of confusion Tuesday when election officials retracted their latest report on the vote count after realizing it had been corrupted by test data never cleared from a computer system.

The bungle was a black mark on New York City’s first major foray into ranked choice voting and seemed to confirm worries that the city’s Board of Elections, which is jointly run by Democrats and Republicans, was unprepared to implement the new system.

The disarray began as evening fell, when the board abruptly withdrew data it had released earlier in the day purporting to be a first round of results from the ranked choice system.

That data had indicated that Brooklyn Borough President Eric Adams, a former police captain who would be the city’s second Black mayor, had lost much of his lead and was ahead of former sanitation commissioner Kathryn Garcia by fewer than 16,000 votes.

New York is the country's largest city and the most prominent adopter of ranked choice voting, a voting system unfamiliar to many Americans. NBCLX Political Editor Noah Pransky explains the significance of the race.

Then the Board of Elections tweeted that it was aware of “a discrepancy” in its report on ranked choice voting results. It didn’t initially explain what that discrepancy was, even as it pulled the data from its website.

Just before 10:30 p.m. it released a statement saying that 135,000 ballot images it had put into its computer system for testing purposes had never been cleared.

“The Board apologizes for the error and has taken immediate measures to ensure the most accurate up to date results are reported,” it said in a statement.

The results initially released Tuesday, and then withdrawn, were incomplete to begin with because they didn’t include any of the nearly 125,000 absentee ballots cast in the Democratic primary.

The Associated Press removed Tuesday’s vote update from its published vote count after the board pulled the results.

If the red and blue political map turns your stomach green, look to Maine for an alternative vision for picking our presidents. On Election Day, the state will be the first to try a ranked choice voting system in a presidential general election. So what is ranked choice voting and why do its supporters say it’s a better way to cast a ballot? NBCLX’s Chase Cain explains.

Adams’ campaign, which had publicly pointed out the vote discrepancy shortly after the faulty count was released, said in a statement that it remained confident he would ultimately prevail.

The publicized vote totals had included an unexpected jump in the number of ballots counted Tuesday compared to the number counted on the day of the primary.

Garcia said in a late afternoon news conference, before the numbers were withdrawn, that she was confident she had a path to victory, but wasn't “counting any chickens before they've hatched.”

Later, her campaign issued a statement saying it was monitoring the situation.

“We encourage all New Yorkers to be patient and we hope when an update comes it includes a transparent explanation of the process,” it said. 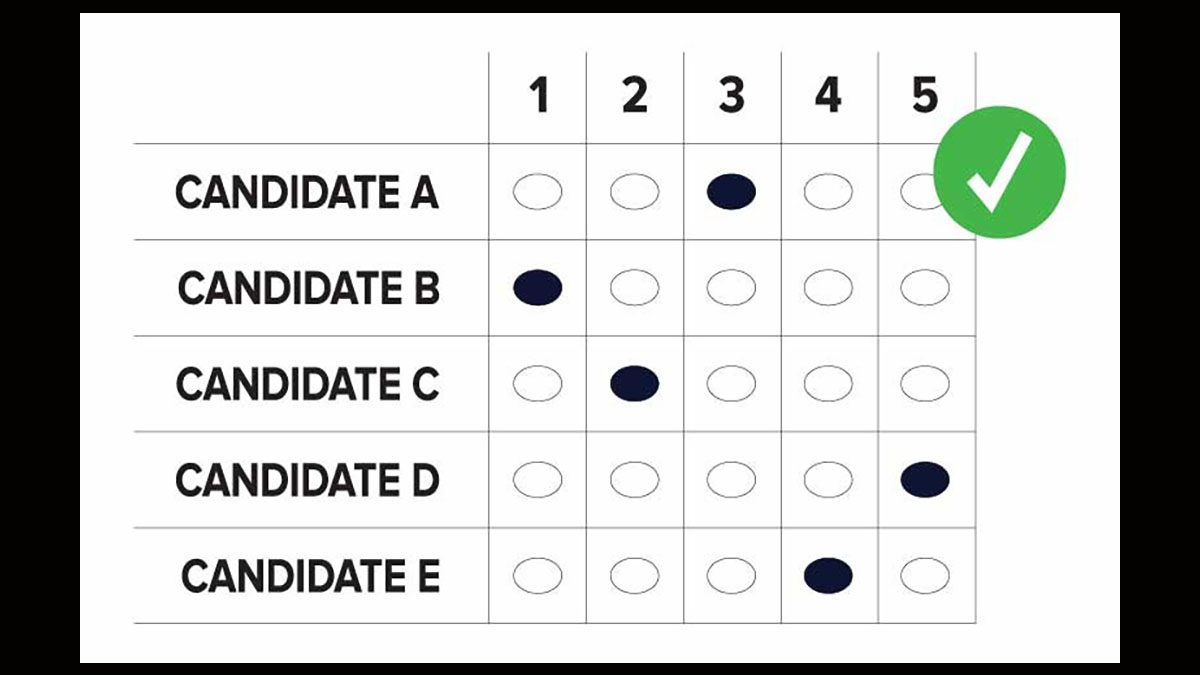 What Is Ranked-Choice Voting and Where Is the System Used? 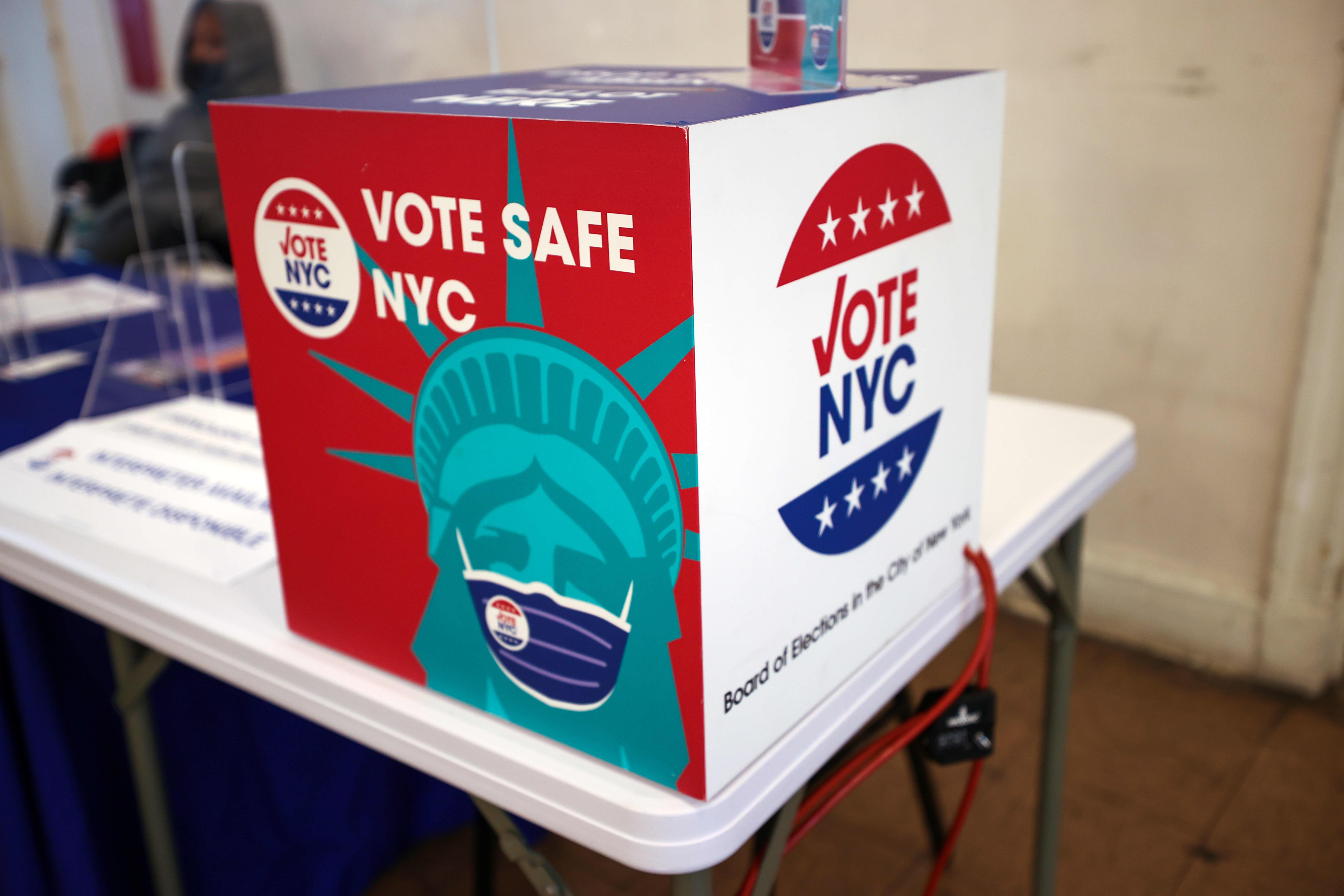 New York City Is Holding Its Mayoral Primary Today. Here's What You Need to Know

Elections officials had planned on conducting another round of ranked choice analysis on July 6 that would include absentee ballots. A note posted on the Board of Elections website indicated it would try posting accurate results without absentee ballots Wednesday.

New York City’s primary went into a state of suspended animation a week ago while officials prepared to give the public its first look at results from the city’s new ranked choice voting system.

Under the system, voters could rank up to five candidates in order of preference.

Since no candidate was the first choice of more than 50% of voters, a computer on Tuesday tabulated ballots in a series of rounds that worked like instant run-offs.

In each round, the candidate in last place was eliminated. Votes cast for that person were then redistributed to the surviving candidates, based on whoever voters put next on their ranking list. That process repeated until only two candidates were left.

When voting ended June 22, elections officials only released results showing who voters put down as their first choice for the job. In that count, Adams had a lead of around 75,000 votes over Wiley with Garcia close behind in third.

New York City's Board of Elections, which operates independently from City Hall, has long had a reputation for mistakes and mismanagement.

Ahead of the 2016 election, it mistakenly purged tens of thousands of voters from voting rolls. In 2018, voters had to wait in line for several hours at some polling places over equipment issues.

In 2020, it struggled to process applications for absentee ballots and initially sent many voters ballots with return envelopes printed with the wrong people's names on them.

The Democratic primary winner will be the prohibitive favorite in the general election against Curtis Sliwa, the Republican founder of the Guardian Angels.

Adams, 60, is a moderate Democrat who opposed the “defund the police” movement and said that under his leadership, the city could find a way to fight crime while also combating a legacy of racial injustice in policing.

He was previously a state senator before becoming Brooklyn’s borough president, a job in which he lacks lawmaking power, but handles some constituent services and discretionary city spending.

Garcia, 51, is a city government veteran who ran as a nonideological crisis manager well-suited to guiding New York out of a once-in-a-century pandemic.

Garcia ran the department of sanitation from 2014 until leaving last September to explore a run for mayor. De Blasio also tapped Garcia to run an emergency food distribution program during the coronavirus pandemic after earlier appointing her interim chair of the city’s embattled public housing system.

She earlier served as chief operating officer of the city’s department of environmental protection, responsible for water and sewer systems.

Wiley, 57, served as counsel to Mayor Bill de Blasio and previously chaired a civilian panel that investigates complaints of police misconduct. A former legal analyst for MSNBC, she ran as a progressive who would cut $1 billion from the police budget and divert it to other city agencies.