Davon McNeal was killed in crossfire

A fourth suspect in the fatal shooting of an 11-year-old boy in D.C. on July Fourth has turned himself in to police.

On Monday, 25-year-old Marcel Gordon, of Capitol Heights, Maryland, surrendered to police in the death of Davon McNeal. Gordon is charged with first-degree murder while armed.

He's the final named suspect wanted in the shooting.

Gordon has been arrested before on the charge of carrying a pistol without a license, police say.

Activists in D.C. demanded an end to gun violence Saturday in the wake of the death of 11-year-old Davon McNeal. The boy was caught in the crossfire while heading to a Fourth of July cookout. News4's Derrick Ward reports.

McNeal, the young son of a violence interruptor, had just stepped out of his mother’s car in the 1400 block of Cedar Street SE when gunfire erupted. They had just held an anti-violence cookout in the neighborhood they moved out of because it was too dangerous. McNeal was shot in the head.

The Metropolitan Police Department had assigned a 24-hour detail to the block where McNeal was killed because of a shooting the previous week, court documents say. An officer was in the area on July 4 but was called away to another incident just minutes before the gunfire began.

“Recent violence between these crews has resulted in several shootings and homicides,” the documents say.

D.C. Mayor Muriel Bowser said she was heartbroken by McNeal’s death. She said she knew detectives would find there was no reason for anyone to fire the shot that killed the child.

“I guarantee you when we find out what this is about, it’s going to be about nothing,” she said with disgust in her voice.

“We will not tolerate this violence,” Bowser said. “Davon should be with his family today.”

General and Wingfield were arrested in the spring because they were found with guns though they had felonies on their records. Wingfield had been under orders to obey a curfew and had had a GPS device cut off shortly before the killing.

Court documents say his GPS device showed he was at the scene of the crime. The device was later found discarded. 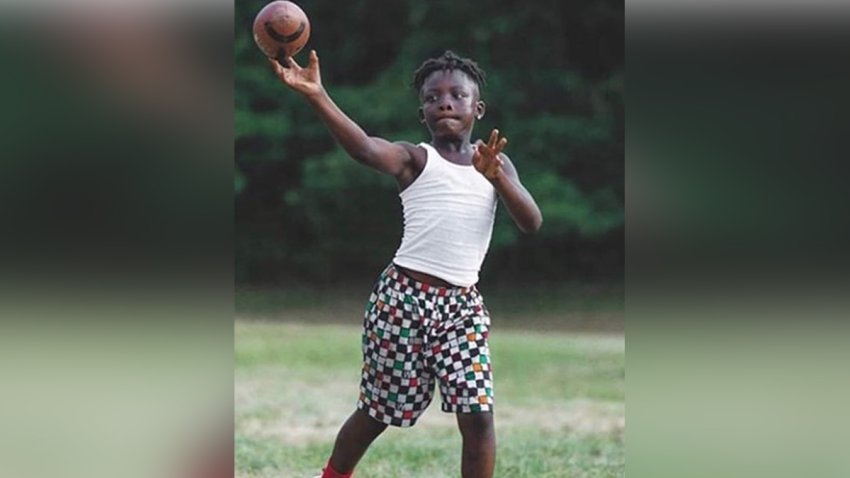 About an hour after officials announced Bond’s arrest, hundreds of people shouted “Davon” at a vigil held in the middle-schooler’s honor. Members of his youth football team wore the team’s colors, black and orange, and released balloons into the sky. Some balloons made the shape of a three, the number on McNeal’s jersey.

“We love y’all. Davon is with me right now. My son is right here beside me,” she said.

A teammate of McNeal also spoke.

“When I heard the news that Davon was shot, I was hurt. I couldn’t stop crying,” he said.