Production is being halted because of what the company called an inconsistency in the ingredients in the medicines. What should headache sufferers do?

The maker of Excedrin is temporarily discontinuing two of the brand’s most popular headache-relief medicines, potentially affecting millions of Americans who suffer from migraines.

GlaxoSmithKline is halting production of Excedrin Extra Strength and Excedrin Migraine because of what the company called an inconsistency in the ingredients in the medicines, specifically acetaminophen, aspirin and caffeine. 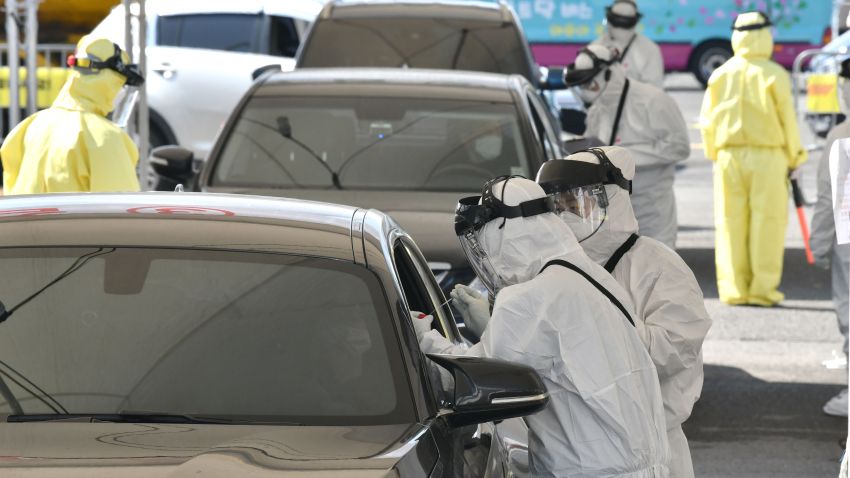 Virus’ Effect on World Economy Grows After Trump Lashes Out

It expects the issue to be fixed and the products to be available again.

“If you think Excedrin is only thing that works for you, the best thing to do is go talk to your pharmacist [and ask] ‘Are there other medicines I can take?’ because there are other over-the-counter medications,” said NBC News medical correspondent Dr. John Torres.

What is a rebound headache?

Migraine sufferers should also talk to their doctor about prescription medications, which work very well, he added.

If you’re taking one medication so much that when you stop, you start having more headaches, beware of a phenomenon called a rebound headache or medication overuse headache, he warned. That's when the pain medicine itself can cause more headaches, according to the American Migraine Foundation.

The brain can become dependent on the medication, Torres explained. People typically wake up with a headache in the morning and take a pill, which doesn’t provide relief for very long, so they take more medication when the headache comes back. The more they take, the worse the headache becomes.

“The key is to stop that medication, but that can make it even worse, the rebound, so you want to be careful,” Torres noted.

About 80 percent of adults suffer from headaches at least occasionally, said Dr. Laurie Knepper, an associate professor of neurology at the University Pittsburgh School of Medicine and a physician with the University of Pittsburgh’s Headache Center.

Headaches aren’t created equal. The pain can be dull and constant, throbbing or searing. They can be annoying, disabling — or, rarely — the sign of a life-threatening medical problem. Knowing which kind of headache you have can help you get treatment and relief.

These are common headache symptoms:

By far the most common reason for head pain, tension headaches tend to be mild and short-lived.

Migraines are "one of the most disabling conditions," said Dr. Yvonne Curran, an assistant professor of vascular neurology at Northwestern University’s Feinberg School of Medicine.

About 18 percent of women and 6 percent of men experience migraines. The current thinking is people who get migraines inherit a brain that is hypersensitive, said Knepper. Once a trigger is encountered, a cascade of events starts, culminating in the stimulation of a brain area that spews out inflammatory chemicals.

“The good thing about migraines is that once they are identified, they usually improve with preventive medications and lifestyle changes,” said Curran.

Most migraines are benign, albeit excruciating. A small subset of those with aura— premonitory symptoms, such as a shimmering or sparkly sensation — do have an increased risk of stroke, Knepper said.

Women with migraines related to menstruation can sometimes be helped by birth control pills that smooth out estrogen levels, although these medications are contraindicated in women with aura because they may hike stroke risk.

About 5 to 10 percent of the population suffers from cluster headaches, which occur in a series typically on one side of the head or around the eye. They often start during sleep and are more common in men than women. Cluster headaches are excruciating, a 10 out of 10 on the pain register, according to Knepper.

“You wake up in the middle of the night with horrible pain around the eyes," said Knepper. They occur pretty much as a cluster for four to six weeks and then go away for a year, two or three and then come back in another cluster.”

“Probably more than 80 percent of these turn out to be migraines,” Curran said. “On imaging, they don’t have sinusitis. People think it’s a sinus headache because it’s in the front of the face, where the sinuses are.”

Even among people who have migraines, the head pain associated with an aneurysm stands out.

“Generally you think of aneurysm when a patient tells you the headache was sudden onset and is the worst headache they’ve ever experienced,” Knepper said. “It can be fatal if you don’t get treatment. This is the most scary kind of headache."

It’s considered an emergency and you should go straight to the emergency room.

Not a typical painful headache, but people with this rare condition have the sensation that they’ve just heard a loud explosion, either as they are falling asleep or as they are waking up in the morning.

While the condition isn’t painful, it can be very distressing, Curran said. People may think anything that goes on in their head has "got to be really, really bad."

In fact, the condition isn’t dangerous and it can be treated with anxiety-reducing medications.