New U.S. Postal Inspection Service data obtained and analyzed by the News4 I-Team shows robberies and assaults against postal carriers are up across the country, and one postal insider says it’s likely connected to the spike in mail theft during the pandemic.

Emilio Alonso said three of his checks swiped from a blue mailbox at a Silver Spring, Maryland, business park originally written for just a few hundred dollars were washed and rewritten for thousands.

"It was about 14, 15 checks that were stolen,” said Alonso. "I lost several hours of days of work, you know, trying to track down the stolen checks."

Others there said it happened to them, too, including Natalia Jordan.

It's gotten so bad they said the mail carrier decided to take some action, wrapping the mailbox in tape to prevent anyone else from using it. 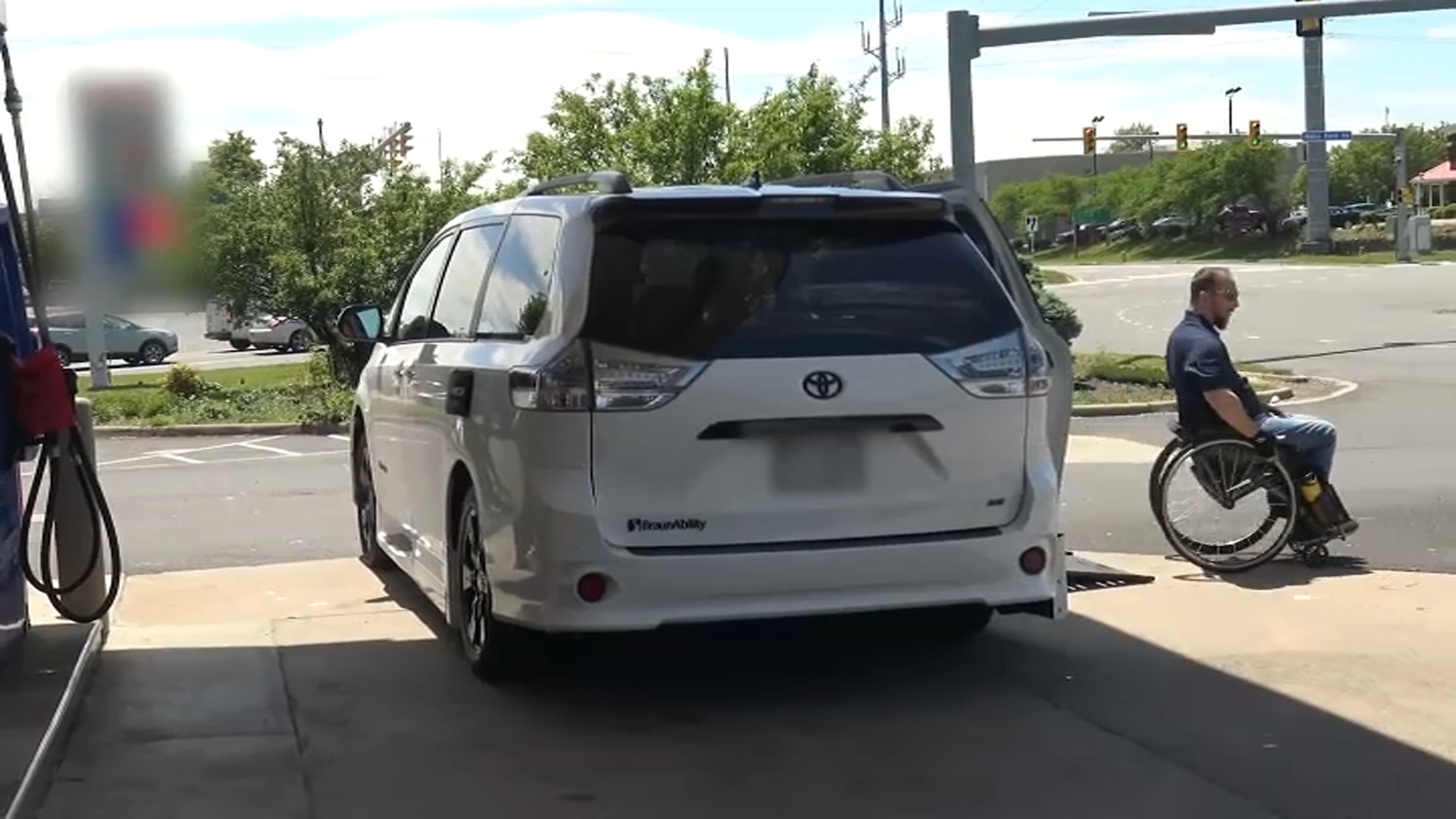 "We have seen an increase in them,” she said. “They are targeting outdoor blue boxes."

The News4 I-Team found that's not all that's being targeted. There’s also been a series of crimes against letter carriers in Montgomery, Prince George's, Alexandria and the District, including a USPS employee shot in October while delivering the mail in Northeast D.C.

The I-Team obtained Postal Inspection Service data and found across the country there have been more than 2,000 assaults or robberies against postal carriers since 2020.

"You don't have to rob a bank anymore,” Postal Police Officer's Association President Frank Albergo said. “You just rob your letter carrier, gain access to a blue collection box or a relay box, and boom, you have thousands of dollars.”

He said the holy grail for many criminals is obtaining what’s called an arrow key, which can open multiple blue boxes in a community.

"These arrow keys give access to collection boxes, apartment panels, relay boxes, cluster boxes,” Albergo said. “So instead of getting a few letters, they are actually getting tubs and satchels of mail."

The Evidence-based Cybersecurity Research Group at Georgia State University has been studying the issue and found stolen arrow keys from around the country including the D.C. area being sold on social media for thousands of dollars. The director told the I-Team his group noticed a recent spike in stolen checks from the Maryland area and now the state ranks in the top five when it comes to stolen checks they see for sale online.

"It's a serious problem,” said Albergo.

How big a problem is unknown. A 2020 Inspector General report said, "The Postal Service’s management controls over arrow keys were ineffective,” and, "The number of arrow keys in circulation, lost, stolen, and broken nationwide is not known."

The agency responded, saying it would consider a study on the value of a "nationwide inventory."  But when the I-Team asked about its status, a Postal Service spokesperson said, "We are continuing to address this but unable to provide details for security reasons."

The Postal Inspection Service told the I-Team the increase in robberies and mail theft complaints is likely due to a number of factors, including the economic impact on people from the pandemic, a growth in mail volume and all those unemployment insurance payments being targeted. The agency said it "deploys additional inspectors to locations around the country where mail theft or other postal-related crimes warrant more focused attention."

They’ve also offered up to $50,000 rewards for information leading to arrests in many of the cases, but according to the postal inspection data obtained by the I-Team, only 14% of the cases since 2020 have had at least one arrest.

He thinks more could be done, including allowing postal police back on the streets to help prevent crime.

A 2020 Postal Service policy clarification limited them to mainly protecting postal service facilities, leaving criminal investigations, including crimes against carriers, to the inspectors, who also sometimes work with local police.

A USPIS spokesperson told the I-Team, “The U.S. Postal Inspection Service has federal law enforcement officers, U.S. Postal Inspectors, who enforce approximately 200 federal laws that cover the misuse of the mail and attacks on the postal system, its employees, and its infrastructure. Criminal investigations, including those involving postal crimes and assaults on letter carriers while they deliver mail to tens of millions of addresses each day, is the responsibility of Postal Inspectors, who are federal criminal investigators with broad statutory authority on and off Postal real property. Postal Police Officers provide uniformed protection for Postal Service property.  The jurisdiction of Postal Police Officers (PPOs) has not changed. Clarification concerning the jurisdiction of the Postal Police Officers was received in 2017 and messaged out to PPOs and PPO management through 2018 and 2019. The Postal Inspection Service deemed it necessary to provide further guidance on the role of PPOs in a written communication in 2020. By law, the jurisdiction of PPOs is limited to Postal Service real property, and as such, the primary role of PPOs is to provide physical security at Postal Service facilities.”

"I feel for the mail carriers,” said Alonso. “They work really hard. You know, rain, sleet, hail or snow, they’re out there working, and to be subject to getting robbed for a key is just, it's crazy," said Alonso.

He said these days he's taking his own precautions.

"I try to meet him at the mailbox and just hand it to him just so I know it's not going to be an issue again," he said.

The president of the National Association of Letter Carriers, Fredric Rolando, told the I-Team, “Letter carriers are a vital part of every community in the country, serving Americans and their businesses six or seven days a week, working outdoors and often into the evening. Their wellbeing is of paramount importance to us. Any numbers or trends that pose risks or threats to that wellbeing are disturbing. We will continue to work with Postal Service representatives and the Postal Inspection Service to take any steps necessary to prevent crimes from being committed against letter carriers and to improve their safety on the job.”

If you have any information about crimes committed against USPS employees contact the U.S. Postal Inspection Service at 1-877-876-2455 (say “law enforcement”).

Reported by Susan Hogan, produced by Rick Yarborough, shot by Carlos Olazagasti and Steve Jones, and edited by Steve Jones.

Complete Response from the US Postal Inspection Service to News4

Unfortunately, no one from the U.S. Postal Inspection Service (USPIS) is available to participate in an on camera interview at this time. However, I am happy to provide the following statement and mail theft prevention tips:

Every day, the U.S. Postal Service safely, securely, and efficiently delivers mail to more than 150 million addresses, including millions of checks, money orders, credit cards and parcels. Unfortunately, such items are also attractive to thieves. The U.S. Postal Inspection Service (Postal Inspection Service) can confirm a recent increase in mail theft complaints and robberies of USPS employees. This increase is likely attributable to a variety of factors, including the COVID-19 pandemic and its detrimental impact on people’s lives, mental health, and financial stability; growth in USPS parcel volume as eCommerce business continues to rise; and the mailing of Economic Impact Payments (EIP) and Unemployment Insurance payments during the pandemic.

The Postal Inspection Service is engaged on multiple fronts with various partners to combat mail theft and prosecute mail thieves including:

• The U.S. Postal Inspection Service engages with its local, county, state, and federal law enforcement partners, including the Department of Justice, to address mail theft and crimes committed against Postal Service employees.

• The U.S. Postal Inspection Service coordinates when appropriate with the U.S. Postal Service Office of Inspector General, which has primary jurisdiction to investigate postal employees suspected of committing mail theft.

• The U.S. Postal Inspection Service employs local law enforcement officers as task force officers in various locations throughout the United States to address mail theft and other crimes with a postal nexus.

• The U.S. Postal Inspection Service utilizes the latest technology and techniques to target cyber-enabled financial crimes including those associated with mail theft.

• The U.S. Postal Inspection Service works closely with other stakeholder groups within the Postal Service to develop, test, and deploy new and improved hardware, tools, and technology to enhance mail security.

• Don’t let incoming or outgoing mail sit in your mailbox. You can significantly reduce the chance of being victimized by simply removing your mail from your mailbox every day.

• Promptly remove mail from your mailbox after delivery, especially if you’re expecting checks, credit cards, or other negotiable items. If you won’t be home when the items are expected, ask a trusted neighbor to pick up your mail.

• Just as you wouldn’t leave the door to your home unlocked while you’re away, you shouldn’t let mail accumulate in your mailbox. Don't leave your mail unattended for extended periods. Have your Post Office hold your mail while you’re away. You can do this online at www.usps.com.

• When expecting a package delivery, track the shipment at www.usps.com. You can sign up for email and text alerts at www.myusps.com.

• If you don’t receive a check or other valuable mail you’re expecting, contact the issuing agency.

• If you change your address, immediately notify your Post Office and anyone with whom you do business via the mail.

• Hand outgoing mail to your letter carrier, or mail it at the Post Office, an official blue USPS collection box on the street, or a secure receptacle at your place of business.

• Never send cash or coins in the mail. Use checks or money orders. Ask your bank for "secure" checks that are more difficult to alter.

• If you have concerns about security in your neighborhood, consider installing a lockable mailbox or obtaining PO Box service from your local Post Office.

• Consider starting a neighborhood watch program. By exchanging work and vacation schedules with trusted neighbors, you can watch each other’s mailboxes and residences.

The Postal Inspection Service encourages customers to report stolen mail as soon as possible by submitting an online complaint at www.uspis.gov/report or calling 877-876-2455. Postal Inspection Service personnel review mail theft complaints to identify crime patterns and trends.  We are then able to strategically target our criminal investigations to areas of need and efficiently and effectively utilize resources to support those investigations.  By analyzing information from customer complaints, Postal Inspectors can determine if there is a widespread mail theft problem in a neighborhood or large geographical area— and the details provided on individual complaint forms may help Inspectors locate and apprehend the thieves.