The Dutch First Legalized Same-Sex Marriage in 2001. Here's Who Joined the List Since

In many countries, even outside of Asia and Africa, opposition to marriage equality remains vehement

Twenty years ago, just after the stroke of midnight on April 1, the mayor of Amsterdam married four couples in City Hall as the Netherlands became the first country in the world with legalized same-sex marriages.

"There are two reasons to rejoice,″ Mayor Job Cohen told the newlyweds before pink champagne and pink cake were served. ″You are celebrating your marriage, and you are also celebrating your right to be married.″

Same-sex marriage is now legal in 28 countries worldwide, as well as the self-governing island of Taiwan. That includes most of Western Europe. Yet its spread has been uneven — Taiwan is the only place in Asia to take the step; South Africa is the only African country to do so.

“If you had told me 20 years ago that today same-sex marriage would be a reality in 29 countries, I would not have believed you,” said Jessica Stern, executive director of the global LGBTQ-rights group OutRight Action International.

But she noted how polarized the world is regarding LGBTQ acceptance, with nearly 70 countries continuing to criminalize same-sex relations.

By Jalyn Henderson. A is for Andrea Jenkins, the first openly trans Black woman elected to public office. B is for Bayard Rustin, an advisor to Martin Luther King, Jr. C is for Harlem Renaissance poet and playwright Countee Cullen. These are the ABCs of Black LGBTQ pioneers.

“The progress has been great, no doubt. But we have a long road ahead,” Stern said.

In many countries, even outside of Asia and Africa, opposition to marriage equality remains vehement. In Guatemala, some lawmakers have proposed a bill that would explicitly ban same-sex marriage. In Poland, President Andrzej Duda was reelected last year after a campaign depicting the LGBTQ rights movement as more harmful than communism.

Poland is among a solid bloc of Eastern European countries that have resisted same-sex marriage, while 16 countries in Western Europe have legalized it.

Switzerland is on track to become the 17th — its parliament approved legalization of same-sex marriage in December. But the law hasn’t taken effect, and opponents are trying to collect enough signatures to require a referendum on whether to overturn it.

Added together, those countries are home to about 1.2 billion people, roughly 15% of the world’s population. Legalization came in various ways: through court rulings, legislation and — in the case of Ireland — a resounding endorsement by voters in a 2015 national referendum.

Several countries in Europe — including Italy, Greece and the Czech Republic — provide civil unions for same-sex couples. But even if these arrangements offer many of the protections of marriage, many LGBTQ activists consider them a demeaning second-tier status.

“Mean Girls” actor Jonathan Bennett said he never saw LGBTQ characters like himself in Christmas movies when he was young. So the opportunity to star in the Hallmark Channel’s first Christmas movie with a major LGBTQ storyline, “The Christmas House,” was more meaningful than most. Bennett joins LX News to talk about his onscreen and real life love story.

Amsterdam will be celebrating the April 1 anniversary with an online symposium and a “rainbow walk” route along 20 sites considered important in the struggle for LGBTQ rights.

“There are still causes for concern,” the city said. “Because equal rights don’t automatically lead to everybody being treated the same.”

One of the couples married 20 years ago, Gert Kasteel and Dolf Pasker, told The Associated Press they’d been warmly accepted by their neighbors and associates, though they’re aware that anti-LGBTQ sentiment persists elsewhere. 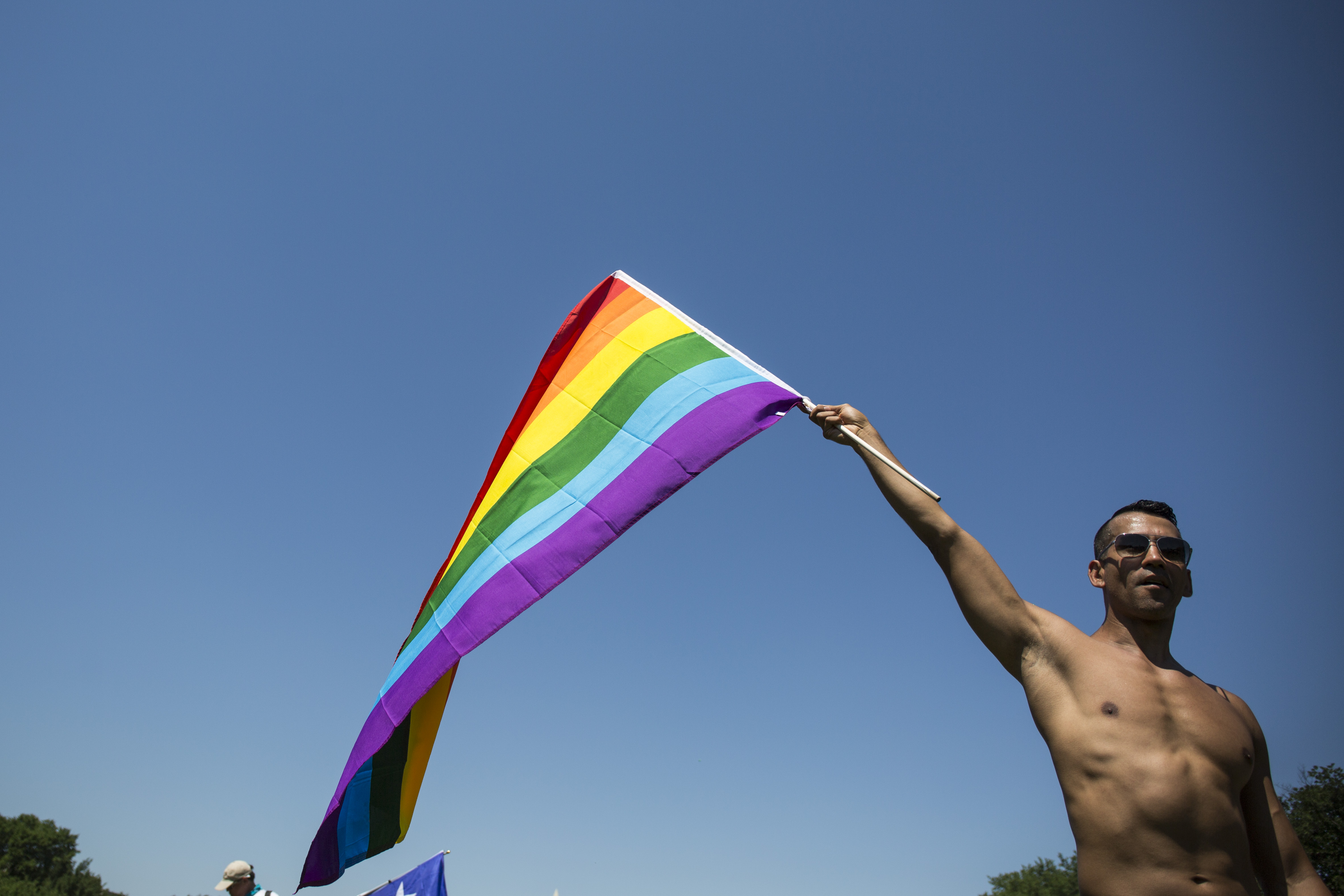 A First: US Senate Confirms Transgender Doctor for Key Post

“For most people, it is no issue any more,” Pasker said. “Oh happy day.”

In contrast to the Netherlands, there was an 11-year gap in the United States between the first legal same-sex marriages in Massachusetts in 2004 and the 2015 Supreme Court ruling that extended legalization nationwide. According to the Williams Institute, a think tank at the UCLA School of Law that specializes in research on LGBTQ issues, there were 513,000 married same-sex couples in the U.S. in 2020.

As in other countries legalizing same-sex marriage, popular support for the concept has risen steadily in the U.S. since 2004. Back then, 42% of Americans thought same-sex marriage should be legalized, according to the Gallup Poll. By last year, that figured had reached 67%.

In Africa, where religious and cultural traditions often frown on homosexuality, no country appears on track to soon join South Africa in legalizing same-sex marriage.

While National Coming Out Day encouraged many young people to come out as LGBTQ for the first time, the CEO of The Trevor Project, Amit Paley, stresses the importance of young people coming out in their own time without outside pressure.

The situation is more fluid in Asia. A same-sex partnership bill has been proposed in Thailand’s parliament. In Japan, where some local governments recognize same-sex unions, a court recently ruled that same-sex marriage should be allowed under the constitution. The ruling has no immediate legal effect, but activists say it could influence other court cases and boost their quest for parliamentary debate on allowing same-sex marriage.

India struck down a colonial-era law in 2018 that made gay sex punishable by up to 10 years in prison, and there are some openly gay celebrities. But same-sex marriage remains illegal; the government says gay and lesbian couples don’t warrant the status of “family unit.”

As the marriage equality movement took shape in Europe and the Americas over the past 20 years, opponents worldwide offered some basic counter-arguments.

One common warning related to religious freedom, with some faith leaders predicting repercussions for religions that disapprove of same-sex relationships.

The U.S. Supreme Court ruled Monday that LGBTQ rights are protected from discrimination in employment.

For the most part, faiths in the same-sex marriage countries have been able to maintain their own rites of marriage. There have been some highly publicized legal cases, however, such as one that reached the U.S. Supreme Court involving in a conservative Christian baker who refused to make a wedding cake for a gay couple.

Another argument was that legalizing same-sex marriage would undermine the institution of marriage itself.

Lawyer Evan Wolfson, who helped orchestrate the U.S. marriage equality movement as head of the advocacy group Freedom to Marry, assessed this argument in a recent article in the European Human Rights Law Review.

“The history of marriage is a history of change and expanding inclusion. ... The sky has not fallen when marriage has embraced same-sex couples,” he wrote. “There is enough marriage to share.”