Pence convened his first meeting of the Coronavirus Task Force

Vice President Mike Pence sought to project calm Thursday in his new role as chief coordinator of the government's response to the coronavirus as the Trump administration rushed to contain mounting public concerns and some of the worst stock market declines in more than a decade.

Pence convened his first meeting of President Donald Trump's coronavirus task force one day after the president made him the government's point-person for the epidemic. Pence also tapped a seasoned medical professional to be his chief adviser and said Trump had "tasked us to take every step necessary to protect the American people."

The meeting came amid confusion over who was leading the inter-agency coordinating process to confront the virus. Health and Human Services Secretary Alex Azar stood alongside Trump on Wednesday when the president announced he was putting Pence "in charge" of the government's virus response.

At the end of the White House briefing, Azar said he was "delighted" to have the vice president's help but also said he wanted to "clarify" that "I'm still chairman of the task force."

Pence explained things differently Thursday. "I'm leading the task force," he said after being asked to clarify, though he noted that Azar continues to hold the title of chairman.

Trump, himself, later defended his administration’s handling of the coronavirus during an Oval Office meeting with black supporters and again suggested part of the market slide was due to nervousness about the Democrats seeking to replace him.

"If any of these people ever did happen to assume the presidency you would have a crash like you’ve never seen before. And I think the market is also putting that into the equation." 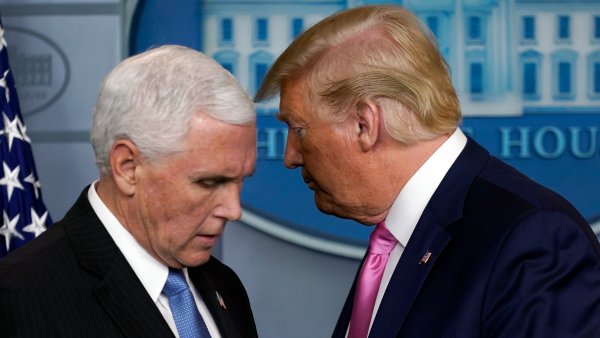 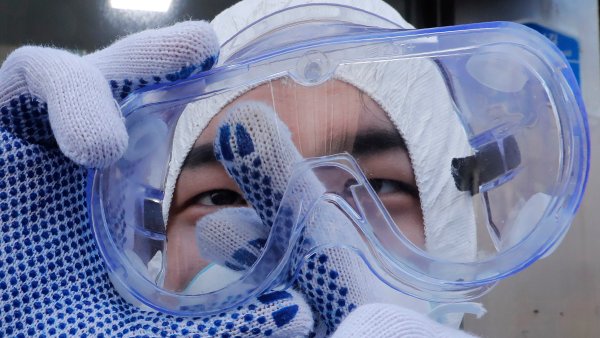 Until now, acting White House Chief of Staff Mick Mulvaney was responsible for coordinating the response across the government outside of the health care agencies. Facing lawmakers' questions Thursday about the new organizational chart, Azar said Pence would now fill that role.

Administration aides insisted there was no daylight between the two men, noting that Pence had scheduled the first meeting under his leadership to be held at HHS instead of at the White House.

On Capitol Hill, Azar told lawmakers Thursday that he was involved in discussions about Trump's decision to designate Pence. He said he welcomed the heft that the vice president's office brings.

"I’ll be honest with you. When I heard the idea that the vice president would be willing to help add the force of his office to this effort, I said, quote, 'That’s genius,'" Azar told Rep. Bill Pascrell, D-N.J.

Earlier Thursday, Pence told the Conservative Political Action Conference in Maryland that "we will continue to bring the full resources of the federal government to bear to protect the American people." Pence said Trump and the administration would work with leaders in both political parties and at the state and local levels.

The White House had wavered on whether to name a "czar" to coordinate the virus response. Trump said Pence would not be a "czar," but he wanted "everybody to report to Mike" and that Pence would report to him. Trump said the scope of the threat had extended beyond the purview of HHS to other Cabinet departments.

Pence sought Thursday to instill confidence in a jittery public and shaken financial markets by naming Debbie Birx, a medical doctor and the administration's global AIDS coordinator, to serve as his chief adviser on the virus. He also added Treasury Secretary Steven Mnuchin and Larry Kudlow, director of the National Economic Council, to the task force out of recognition that the situation was quickly becoming an economic threat, too.

The Dow Jones Industrial Average sank nearly 1,200 points Thursday, deepening a week-long global market rout caused by worries that the coronavirus will wreak economic havoc around the world. Stocks are headed for their worst week since October 2008, during the global financial crisis.

Pence said he'd had conversations Wednesday night and Thursday with House and Senate leaders of both parties to discuss funding for the virus response. The administration has requested an additional $2.5 billion, while Senate Democratic leader Chuck Schumer of New York countered with an $8.5 billion proposal.

Pence described the conversations as "productive" and "very positive" and said he would look to the task force for guidance on additional funding.

Speaker Nancy Pelosi, D-Calif., said she told Pence when they spoke Thursday about her concerns about his leadership based on his record on health issues when he was Indiana's governor, including his reluctance to authorize a needle exchange program following an HIV outbreak in the southern part of the state.

The White House and Pence's team moved Thursday to control the flow of information from federal agencies about the virus response, ordering that public communications be cleared by their offices. A person familiar with the matter, who spoke on the condition of anonymity to discuss the internal guidance, said the decision was made to ensure the whole-of-government response was on message.

Ron Klain, who coordinated the U.S. response to the Ebola threat during the Obama administration, had a sharp retort to Trump's comment Wednesday that "because of all we've done, the risk to the American people remains very low."

Klain tweeted Thursday: "Oh look: it's the "Mission Accomplished" tweet for #coronavirus." That was a reference to President George W. Bush's premature claim in 2003 that major combat operations in Iraq had ended when the war, in fact, continued for years.