Only In DC: College-Educated Hobos Beg For Jobs

Write your own self-important socio-economic interpretation

D.C. commuters and other "city folk" may have noticed a trend developing among our city's proud tradition of common street beggars: they're in suits, and they're begging for boring office jobs. They're handing out resumes.

We have determined this to be a "trend" -- and one just ridden with major socio-economic interpretations waiting to be made by self-important people -- after compiling a database with a whole two (2) real-world cases. It's called "science."

The first "New Wave Hobo" was spotted recently on the K Street, where the lobbyists work. Fresh haircut, clean suit, and holding a poster on which he wrote in large handwriting, "3 YEARS EXPERIENCE IN D.C. (POLITICS)." His resume claimed he was a conservative media specialist, but everyone knows that the media is liberal.

And today's Washington Post profiles our second living, breathing manifestation of this trend, somewhat-recent college graduate and Peace Corps vet Michael Volpe (who was featured on this very own Web site Tuesday). The 25-year-old has sent out "hundreds" of cover letters and attended "scores" of job fairs since November, with no luck. Last week, he decided to become DC's second New Wave Hobo:

This week, he took his job search in a new direction, standing outside downtown D.C. Metro stops during morning rush hour with a sign around his neck reading, "ENTRY LEVEL JOB SEEKER."

And you know what? There are some awfully mean people in this city -- lawyers, usually -- and we *truly* hope they lose their jobs, houses and friends in the near future:

On Wednesday morning, his battered pride took another hit as he became the butt of commuter humor.

"Ha! You're good for a morning laugh, at the very least!" howled a lawyer who shifted her armload of case files and held up her camera phone. 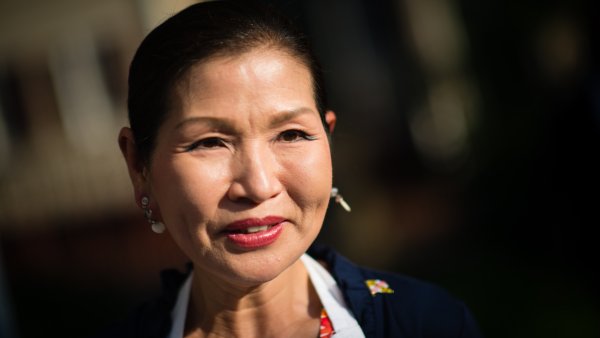 We at NBCWashington.com wish Volpe and the conservative media specialist all the best. It takes some guts to make yourself so vulnerable in DC, the so-called "recession-proof" city.