Storm Team4 is tracking snow Sunday and Monday for D.C., Maryland and Virginia

Update: This article is o longer being updated. For the latest, please go here.

The D.C. area's first significant snowfall in two years is expected to begin in the wee hours of Sunday morning, potentially bringing 4-10 inches of precipitation.

The snow will spread in through the south and west and quickly envelop the entire region with measurable snow.

The National Weather Service has upgraded to a winter storm warning for the D.C. metro area, southern Maryland and the Northern Neck of Virginia starting about 1 a.m. Sunday. See all weather alerts here. 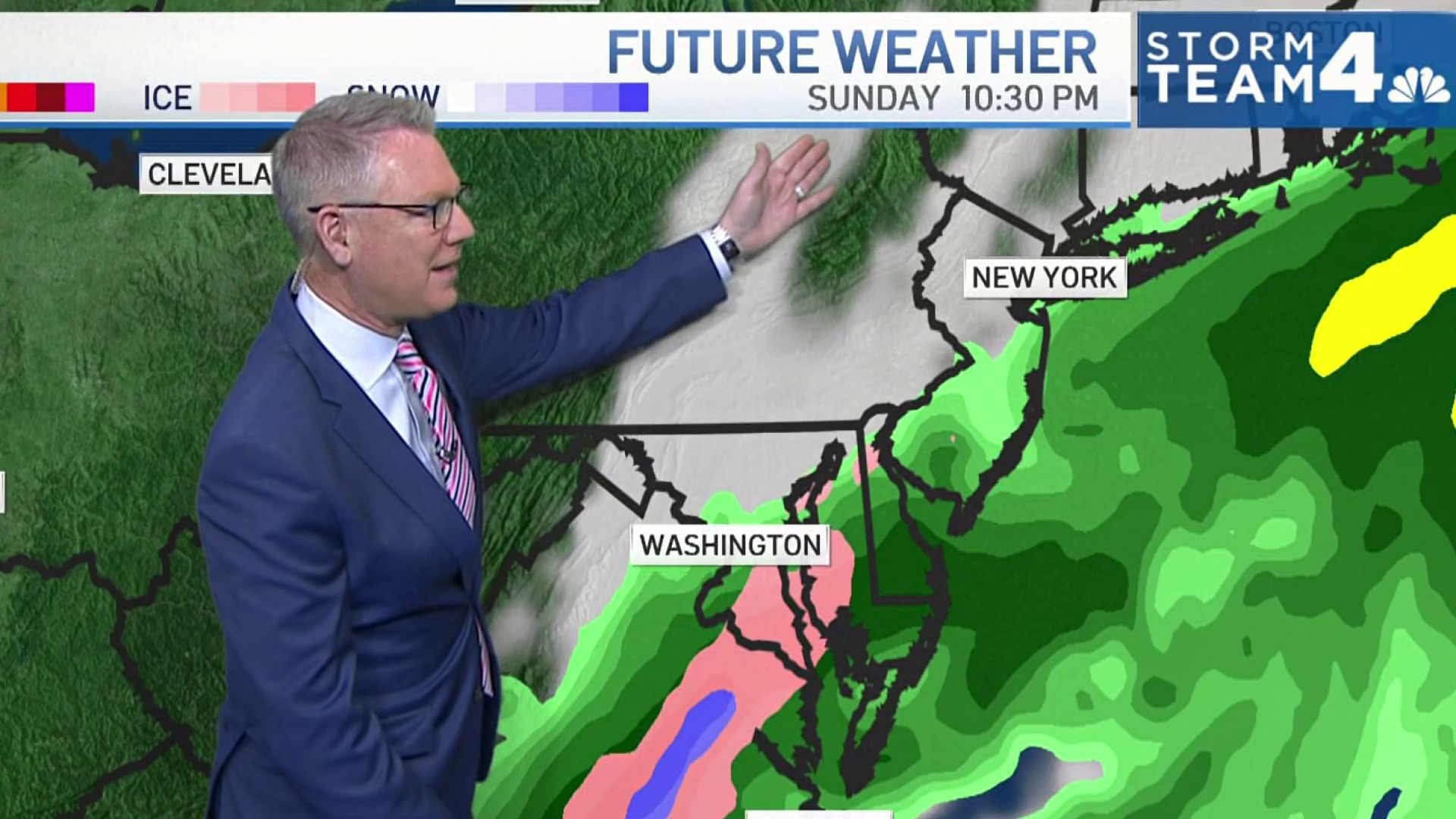 The D.C. metro area is on track to receive anywhere from 4 to 8 inches of snow. Areas northwest of D.C. can expect 6 to 10 inches, and southern Maryland along with parts of the Northern Neck can expect about 4 to 6 inches.

A blast of winter weather is on the way, and everyone - from road crews to residents - is getting ready. News4's Shomari Stone has a look at the last-minute preps.

Metrorail is adjusting service on Sunday. See the latest changes here. Metrobus will operate on a moderate snow plan Sunday.

Snow Timing and Totals Forecast for DC, Maryland and Virginia

Snow will move in to parts of Virginia and Maryland by 5 or 6 a.m. Sunday. By midday, the entire region will be seeing snow.

Potential rain-snow mixing overnight into Monday could diminish the blanket of snow. Heading into Monday, parts of the area will continue to see snow, while a wintry mix could affect snow totals in some places, depending on where the rain/snow line falls. Expect snow to transform into a wintry mix or light rain in areas south and east of D.C. first.

Road crews and hardware stores were busy Friday ahead of the storm expected to move in Sunday morning. Chris Gordon reports.

The precipitation will change back to all snow again and continue to fall throughout Monday.

Depending on that changeover, D.C. could get 5-8 inches of snow or more. Areas to the south might be able to expect 4-6 inches or more, while to the west and north, 6-10 inches or more could fall. Most of the snow will accumulate Sunday.

The forecast is still developing, so stay with Storm Team4 for the latest updates.

As of Saturday, Gaithersburg and the city of Rockville in Maryland and the city of Falls Church in Virginia have declared snow emergencies, which will also go into effect at 9 a.m. Sunday.

In Rockville, all vehicles must be removed from roads within the city, including neighborhood streets, by 9 a.m. Sunday. To check whether an address is within the city limits, go here.

D.C. Mayor Muriel Bowser announced the District Snow Team would be deployed at midnight on Sunday to prepare for the snowfall. Crews will spray a combination of brine and beet juice on streets to reduce the temperature at which ice bonds to the pavement. Additionally, 147 dump trucks will be deployed to apply salt to roads, highways, bridges and ramps throughout the city.

Officials in the city of Alexandria have urged residents to stay off the roads in the event of snow or ice, not to park on snow emergency routes, keep shovels and salt or sand handy, prepare an emergency kit and clear debris from around fire hydrants and storm drains, and to avoid shoveling snow into the street.

Prince George's County officials announced that all COVID-19 vaccination appointments booked for Monday through the county's portal have been canceled. People with appointments will be able to reschedule for a later day in the week.

Metro announced service changes in advance of the storm.

Metrobus will operate on a moderate snow service plan beginning Sunday morning. Service on some routes will be suspended and detours will be in effect to avoid areas prone to hazardous conditions. Metro recommends planning for additional travel time in the case of delays due to the road conditions.

Metrorail will open at 8 a.m. with trains running at a normal weekend schedule, since trains can run very close to a normal schedule in up to 6 inches of snow, but minor delays may be possible due to icy conditions. Additional crews will be working to clear station platforms, walkways and parking areas, but the upper levels of parking garages may be closed off because of snow accumulation.

Blue Line service will operate between Huntington and Largo Town Center. Addison Road and Arlington Cemetery stations will be open, as scheduled track work for Sunday was canceled.

Metro Access plans to run on a normal schedule, but there might be delays depending on road conditions. Further service changes may be necessary based on conditions throughout the area.

It’s not a typo, and you’ve probably heard the term during a weather forecast. Thundersnow is a real—and rare—weather phenomenon that results in thunder, lightning and snow. Here’s how it happens.

Download the NBC Washington app to get Storm Team4 weather alerts and the latest forecasts.