“The streets, roadways, and avenues of the District connect us to our families and friends, get us to and from work, and bring our community closer together – that’s why it’s imperative for my office to enforce our traffic safety laws. When people threaten public safety and the residents of the District by driving recklessly on our roadways, we hold them accountable,” Racine said in a statement.

According to court documents, Khan and Millington were driving Ford Taurus police cruisers when they crashed on April 22 in Northeast D.C. 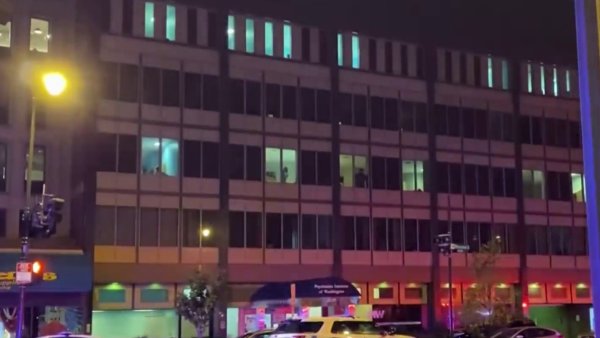 3 Wounded in Stabbings at Psychiatric Institute in DC

"Both vehicles carelessly and heedlessly proceeded south on Anacostia Avenue, accelerating to speeds that displayed a wanton disregard for the safety of both persons and property," documents say.

Khan and Millington each hit speeds of almost 50 mph while racing in a 25 mph zone, according to court documents. Millington tried to make a left turn in front of Khan's car onto Polk Street NE and the two collided.

"Defendant Khan attempted to swerve to the left but was unable to avoid striking the rear driver side of [Millington's vehicle]," court documents said. Millington's car spun out through the intersection and eventually collided with a fence.

"A section of the wooden fence was destroyed as a result of the collision," documents state.

All four of the officers reported minor injuries and were treated at the Police and Fire Clinic.

One of the four officers was a probationary employee and was fired, D.C. police said. The department did not reveal their name.

The other three are on a non-contact status pending review by the D.C. attorney general and then the Metropolitan Police Department’s Internal Affairs Bureau.

One of the officers in the passenger seat captured the crash on his body camera.

“Obviously those types of things are unacceptable, they’re embarrassing. It’s not something that we tolerate,” Police Chief Robert Contee previously said. “It’s certainly something that I will not tolerate as the chief of the Metropolitan Police Department.”