Surging Pens Even Series With Caps

The Pittsburgh Penguins finally discovered a few holes in rookie goalie Simeon Varlamov’s game, and his glove, and are now in a familiar position in the playoffs against Washington. They’re surging, and the momentum-less Capitals are slipping.

The Penguins shook off an opening-minute Washington goal, scored three times in less than 12 minutes in the first period against a suddenly vulnerable Varlamov and beat the Capitals 5-3 Friday night to even the Eastern Conference semifinals at two games each.

The Capitals won’t get much time to regroup and try to regain the momentum they gave up by losing twice in Pittsburgh, with Game 5 set for their home ice Saturday night.

Washington scored one-goal victories at home in each of the first two games as Alex Ovechkin scored a combined four goals, but he was shut out for the first time in the series Friday while being constantly shadowed by defenseman Rob Scuderi. 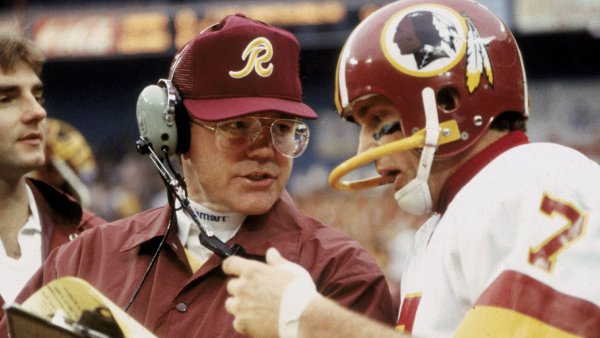 Ovechkin wasn’t a factor while being held to only two shots, while Penguins star Sidney Crosby had a goal and an assist.

Capitals owner Ted Leonsis is unhappy at playing twice in two nights in two cities, all because of a Yanni concert in Pittsburgh on Tuesday. He may be even more displeased with the Capitals’ first major letdown in the series, which may have prevented them from taking a 3-1 lead back home for a possible close-out game.

Instead, the Penguins have a chance to do what they did against the Capitals in 1992 and 1996, when they trailed 2-0 in both series only to rally and win. Washington trailed the Rangers 3-1 in the first round before winning the next three games.

Sergei Gonchar, who was injured later in the period, Bill Guerin and Ruslan Fedotenko scored in the first for Pittsburgh to quickly turn a one-goal deficit into a two-goal lead. The surge left Varlamov -- who had only six games of NHL experience before the playoffs -- shaking his head at his inability to stop not-difficult shots.

Gonchar was helped off the ice late in the period after absorbing a knee-on-knee hit from Ovechkin. There was no immediate word about the injury, or how long it would sideline the Penguins’ most experienced defenseman.  Ovechkin was called for a tripping penalty on the play.

Varlamov, arguably the best player on the ice while making 39 saves during Pittsburgh’s 3-2 overtime win in Game 3, probably couldn’t be blamed for Guerin’s go-ahead goal on a rebound of Crosby’s in-close forehander midway through the period. But he had a good look all the way on Gonchar’s tying goal from near the blue line, which came slightly more than 3 minutes after Nicklas Backstrom gave Washington a seemingly big lift by scoring in the opening minute.

Maybe that was a bad omen for the Capitals, since the team scoring first has lost all four games in the tightly played series. A much-worse omen came when Varlamov, looking shaky for the first time in the series, was beaten by a seemingly harmless 50-foot wrist shot that Fedotenko was merely trying to throw on net at 15:25 of the first, making it 3-1 -- Pittsburgh’s first multiple-goal lead of the series.

The Capitals briefly regained their game in the second, getting a late Chris Clark rebound goal to get within 3-2, but Crosby scored on a 2-on-1 break with Miroslav Satan for his playoffs-leading ninth goal at 4:16 of the third. It was the only goal of the eight in the game by one of the Big 3 of Ovechkin, Crosby and Evgeni Malkin.

Milan Jurcina’s short-handed goal again got Washington within a goal but, barely a minute after his wide-open shot along the goal line didn’t go in, Max Talbot restored Pittsburgh’s two-goal lead by scoring at 14:46.

Notes:  Pittsburgh had lost its previous three Game 4s. … Washington came in with an 11-6 scoring edge in the first period. … After the Capitals complained about the Penguins’ 17-9 edge in power plays during the first three games, Pittsburgh went 1 for 6 with the man advantage to Washington’s 0 for 4. Through Thursday’s games, the Capitals had been called for 10 more minor penalties than any other playoff team.