Slug vs. Sabres: Is it time for Buffalo fans to reclaim their logo?

Skates in the crease during the Stanley Cup finals. Players who talk about a hometown discount and then sign huge contracts elsewhere in the conference. Maxim Afinogenov.

Buffalo fans have struggled through their share of cruel teases, and we haven't even mentioned Scott Norwood (oops). Chalk up another one last week: It was discovered that the vintage logo of the Buffalo Sabres, now featured on a third jersey released this season, was being painted at center ice at HSBC Arena.

Was this the end of the "Buffaslug" logo?

Turns out every team with an alternate sweater is painting that logo at center ice during the preseason. So while the crossed sabres are back for special occasions, it's still an angry cashew nut for the rest of the games.

Charlie is a Sabres fan who is ready to pour a ton of salt on the Buffaslug. His Web site, SabresNotSlugs.com is "dedicated to eliminating one of the worst logos in professional sports." He's got a blog chronicling the latest logo news, and classic forms of protest like this "clip and mail" cartoon that compares the logo to Donald Trump's hair and a possessed chipmunk.

We asked Charlie some questions about this latest dashed hope for Buffalo Sabres fans, and about whether the slug is finally on the endangered species list. 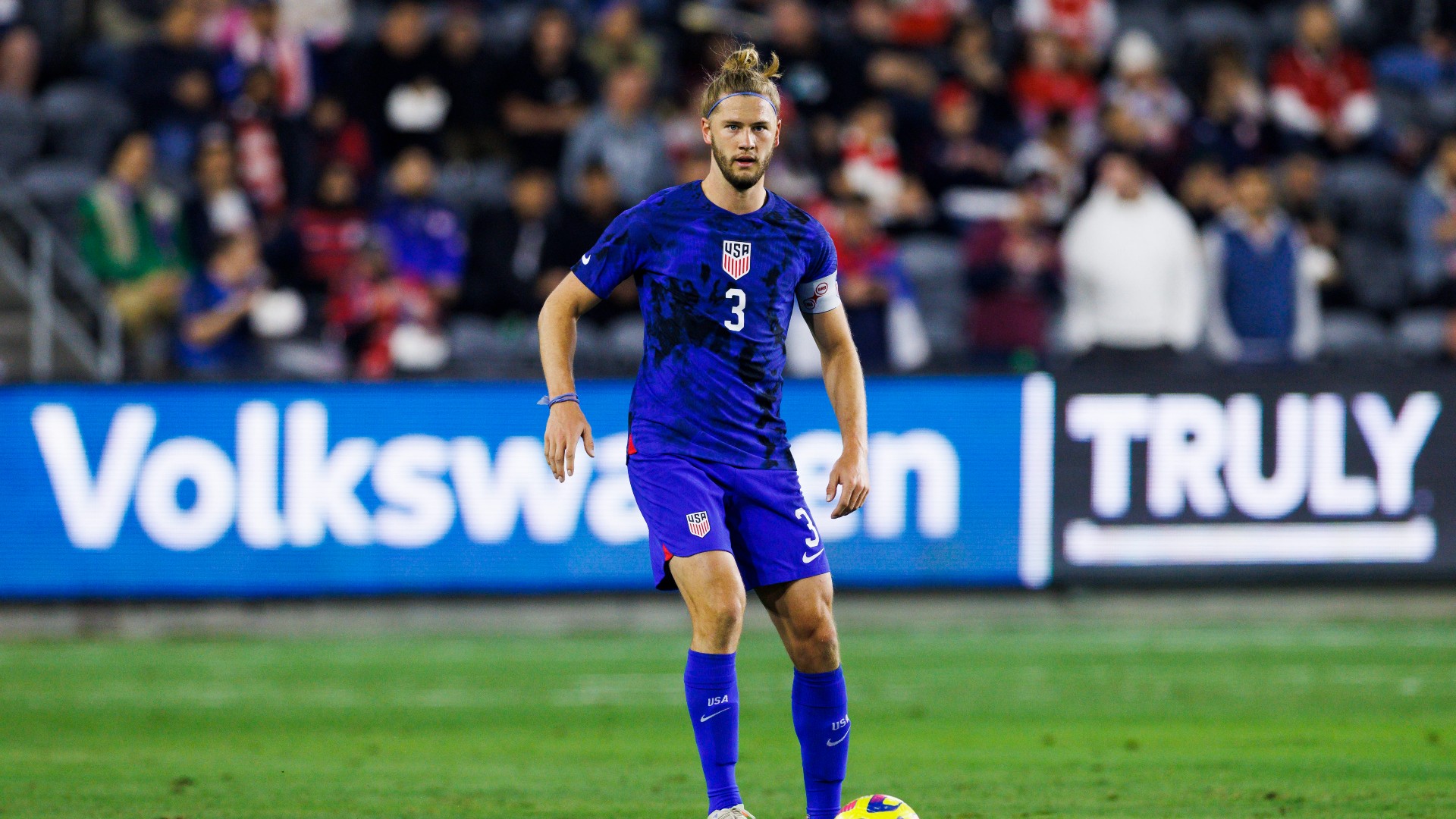 Take us back to when the slug was introduced. What was your reaction, and has that opinion changed at all? What does it look like to you?

When I first saw the logo was back in May of 2006, I agreed with everyone else's initial reaction that it resembled more a charging yellow mollusk than anything resembling a Buffalo or Sabres.

Overall, the exciting news of the return to blue and gold for most fans meant a return to the vintage logo, colors or some updated variant of each. There were some very popular concepts created by designer John Slabyk called "The New Blue and Gold Project" that were actually pitched to Sabres minority owner Larry Quinn in 2003 (then managing partner at the time) but the team but ultimately chose not to pursue those designs. It was total disappointment with the anticipation and letdown. It was the fact that they decided to go with something so awful, so laughable.

After 10 years in black and red, it just seemed like a gigantic disaster.

So over time, I've grown to dislike it more and more. It looks like a yellow legless Buffalo Bills logo copy, a banana, cashew, banana slug, and not so much the "stylized charging bison" it's supposed to resemble. A logo that draws unwanted associations is a huge taboo of logo design. The aesthetics of the logo are awful and it reeks of trendy swooshy uncreative unoriginality.

So I got really upset and along with Drew Celestino who originally started the Fix the logo campaign, I decided to use my discretionary income initially put aside for new Sabres merchandise and use it to help protest this poor, offensive identity choice as well.

What the hell is with Buffalo teams changing uniforms so often in the last decade?

I don't think it's the Buffalo teams changing so often over the last decade, it was just the changes made were all questionable. The Sabres changed color scheme from a look introduced in 1996 changing the blue and gold look worn 26 years prior. The Bills changed from a look they were wearing since 1984. Now they run the field looking like a pipe and stripe filled monochrome nightmare.

Excluding the popular Buffalo Bills standing Buffalo throwbacks and these new third Sabres jerseys, all uniform unveilings from 2002 and 2006 have received mixed if not negative reviews.  It's not excessive change, just very bad changes in my opinion.

I don't mind change, but there is something to be said for tradition; especially these days, where everything seems to be temporary, superficial, and only interested in grabbing our hard-earned dollars.

Take us through the news of the last few days, regarding the alt logo being painted at center ice. False hope?

News here was exciting, and from what I can tell by a lot of fans on message boards the consensus viral opinion on the "internets" is that people want to keep that new logo on center ice and that indeed is a sign of things to come as far as a change in identity to this new updated vintage style logo. They simply want this as a primary look, not the third look, which is a different feeling compared to other teams and their third jerseys.  It was the same sentiment when fans saw the Sabres white jerseys for the NHL Winter Classic.

Now we are hearing tales the new third logos on center ice are only for the NHL preseason and is only facilitating a new third jersey awareness marketing campaign. I feel a bit teased ... and foolish for such optimism and am forced to remember that Larry Quinn said those white jerseys might be the "last time you see them on the ice."

That doesn't mean to give it up, though.

When the Slug was introduced, the gear sales were massive. That's a hard fact to get around when trying to claim that Sabres fans want a different logo, so how do you counter it?

Essentially, why would you want to get rid of a uniform on a logo that allegedly was selling 1000%  higher than the previous era's "Goat head?"

In 1996 the New York Islander "fish sticks" logo sold as high as number four in league sales and most hockey fans know what happened as it was quickly scrapped.

You recall that was for an awful team at the time with a very rich history and a metric ton of Stanley Cup hardware laying around.  Prior to 2006, Buffalo had not seen a successful sports team in a long time. The Bills were perennially mediocre. The Sabres had missed the playoffs. The lockout happened. Then this team came out of nowhere, with a crop of young players, and they were winning. They made the Eastern Conference Finals. This town fell in love. They were considered the better team but lost due to a catastrophic string of injuries. They were picked as a Stanley Cup favorite going into the next season. They introduced the slug which came with heavy criticism. They went 12-0 to start the season. The team was the hottest thing Buffalo had seen since the Bills first Super Bowl season. Maybe hotter. Everybody loves a winner, even if their logo's a joke. Those jerseys would have sold if they had pink bunnies on them.

I maintain that the slug's sales was a fluke, a perfect storm of winning, management avoidance, and genuine fans simply happy they got the blue and gold colors back.  Winning though, was the main catalyst, and it still doesn't validate such a bad logo design.

I suppose my fatal flaw is that I happen to hold a little more weight that no matter how well or bad teams play, they have a right to look good doing it. What is a team to do for extra revenue from merchandise if they play like crap and look like it too? I feel that way about all pro sports teams.

Do you think the players care about any of this, or is this strictly a fan story?

I've heard ex-Sabre Michael Peca comment in a negative way on the slug but ultimately the players are paid ridiculous money so I'm sure they have no problems keeping their opinions to themselves about what is sewn on the shirt they skate around with.

Now on the other hand, the RBK Edge uniforms themselves have received high profile player feedback in terms of its lack of performance on the ice due excessive moisture wicking into gloves and skates,  fight strap issues and shirt tails. This led to a revision of the Edge jerseys to incorporate old air knit material on certain jerseys at player request.  We even see players practicing in older non RBK Edge jerseys.

Reebok, the NHL, and revenue sharing teams don't want the word to get out that their product may not deliver as advertised.  In that case, both players and fans are involved because this all rests under the NHL-Reebok umbrella.

Also, check out Uni Watch or Icethetics or Sportslogos.net. Do you think it's only a couple of guys out there who care about uniform and logo design? Far from it.

In your opinion, what's the future hold for the slug? Is the third jersey the first step to its extinction?

I mean come on, it's widely known and not too affectionately as a slug! UC Santa Cruz should be suing the team for intellectual property infringement. They wanted to be known as the Banana Slugs ON PURPOSE!

Time will ultimately tell but I hope it is an indication of what is to come. So far this new third jersey is what fans expected the Sabres to deliver back in 2006. Also, the team can't do anything until they meet the NHL timetable mandate of a wearing the look a certain amount of years before teams can make such changes.  The team has now hedged the logos and brand identities against each other, so it is up to the fans to get vocal and decide if the new vintage style logo is what should be the primary look of the team.

I simply think the vintage logo holds much more long term brand equity and emotional connection for fans than a trendy yellow swooshy streak. Pair that along with a new road white vintage style jersey and I don't see many more complaints. As for folks who purchased slug merchandise, I think the team should keep it as a third jersey.  That would be the fair thing to do for the most people involved and we can move on from this debacle.

But the funny thing is by 'fixing' the problem by introducing what promises to be a popular jersey, they may in fact, have involuntarily forced the identity change.

This new third will be wildly popular and eventually fans will want to see this on the ice for more than 15 games a season, especially since as the Buffalo Sabres' 40th anniversary approaches.

I expect fans of both the Sabres, hockey, and good taste will echo that.  It makes sense to the fans, and it should make sense to the team's revenue stream to just do it.