Puck Headlines: Have the Wings learned their Game 6 lessons?

• Reminder: Live Blog of Game 6 tonight with the usual gang of knuckleheads at 7:45 p.m. EST. Should be a show.

• Kevin McGran, live-blogging the hearing in Phoenix, writes that no decision will be made today on the sale and relocation of the Phoenix Coyotes. Bettman's in da hizzy, by the way. [Toronto Star] 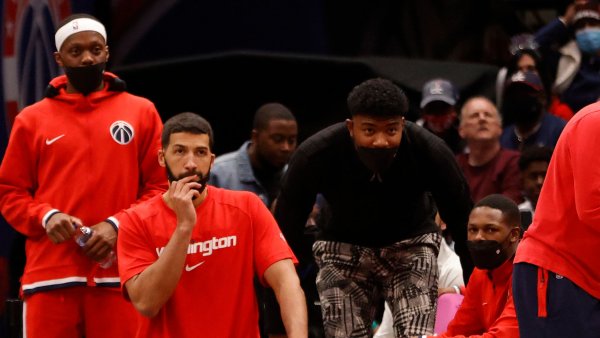 • Mike Babcock has made it clear to his Detroit Red Wings that Mellon Arena was a chamber of horrors for them in Games 3 and 4, and that winning Game 6 in last year's Final was no picnic in the park either. The Wings are going to be focused tonight; our hearts say "Game 7," but our heads are telling us otherwise right now. [Freep]

• Everyone and their mom in Pittsburgh is reporting that Petr Sykora could be back for the Penguins tonight. [Rotoworld]

• George James Malik has more on the 'Joe Vision' viewing party that was cancelled and the culprits behind the decision. [Snapshots]

• Great stuff from Bob McKenzie on the special teams battle, frustration setting in for the Penguins and what Max Talbot's slash on Pavel Datsyuk's foot actually was: "Was it a ridiculously vicious chop? No. Was it a targeting of an injured player? Absolutely. And some people might suggest that's what the Stanley Cup playoffs are all about but I'm sure the Red Wings would say otherwise as they don't embrace that whole concept of vigilante justice very much." [TSN]

• Interesting take on Marian Hossa and his desire to win (compared with Mats Sundin's lack thereof). [Sports and the City]

• Speaking of Hossa, Mirtle with an fascinating stats-based look at how hard it is to win the Stanley Cup: "Only somewhere between 10 and 15 per cent of players born in the last 60 years have managed to do so - and that could easily be a number that trends downward in a league with 30 teams and franchise players getting locked up on long-term deals." [From The Rink]

• You could list every ailment from the last season of "House" and it still wouldn't read as sadly as this rundown of the many injuries of Marian Gaborik. "F-R-A-G-I-L-E ... it must be French Italian (Joke Fail)!" [Goon's World]

• Let's get this straight: Every athlete who plays the Predators in Nashville would have to pay a $2,500 "jock tax" under a proposal by the Tennessee Senate; and the Predators would pay as much as $7,500 per season for the privilege to play in Tennessee? The Memphis Grizzlies and their opponents would be taxed; the NFL and minor league teams would not. Here's the thing, according to The Tennessean: "21 of 24 states with major-league professional sports franchises will charge jock taxes." Amazing. [Tennessean]

• What the Philadelphia Flyers can learn from Chris Osgood's Stanley Cup success. [Philly.com]

• Buried at the bottom of this piece on Curtis Joseph not returning to the Toronto Maple Leafs: "The Toronto Sun report also suggests the Leafs won't retain restricted free agent Justin Pogge." Has there been a biggest goaltending prospect bust in recent memory? (Leafs Fans: "His initials are C.P. and he likes to smoke.") [Sportsnet]

• The local TV station in Hershey, Pa. will break away from the NBA Finals to show the Calder Cup being skated if the Bears win. [OFB]

• Good stuff from Capitals Insider on the Calder Cup Final. We snarked about it on Twitter today, but it was nice to see coverage of the Stanley Cup Final in the print edition of the Washington Post on Tuesday after a weekend without any. [Caps Insider]

• Back where he belongs: The Sault Star reports that former NHL coach Craig Hartsburg is being considered for Everett Silvertips' vacant coaching position in the WHL. [Enterprise News]

• Dissing Onondaga County for not allowing the AHL Syracuse Crunch to play an outdoor game. [Syracuse.com]

• At this point in his playoff beard growth, it should be mandatory that a Ford pickup and a spittoon are Photoshopped into every picture of Dan Cleary. [AP]

• Sports Reporter Lede of the Day: "When you can't afford to lose another game or the season is over, it's like driving on a treacherous mountain road filled with potholes. The pressure mounts and one bounce can be the beginning of the end." Also, it's more fun if you're drunk. [Sun Media]

• June 18 has been declared "Martin Brodeur Day" in the Garden State, and the Devils are shipping fans down to via train Trenton for a celebration. The train is in the shape of a double cheeseburger. Just kidding. Or not. [Fischler]

• It's official: HC Salavat Yulaev has signed a 3-year contract with forward Viktor Kozlov, formerly of the Washington Capitals. Fare thee well, good sir, and thanks again for that epic interview. [Japers]

• More stats fun: Is the Atlantic the toughest division in the NHL over the last few seasons? [Blueshirt Banter]

• NOT HOCKEY: Stephen Strasburg cards are selling for as much as $600 on eBay before the kid has thrown a single pitch in the Majors. Wonder how much Brien Taylor cards are going for these days? [CNBC]

• Jeff Schultz of the AJC sits down with Don Waddell of the Thrashers, who assures him that Atlanta is still a thriving NHL market despite Waddell still being in it. [AJC]

• Sometimes, people need empirical data to reinforce the obvious; hence "Hockey Buzz Hogwash" and its year-long study of Dwayne Klessel's reporting. Look, the dude's a huckster and a damn good one. Whether you choose to pay attention to his cries for attention and occasional forays into martyrdom is, ultimately, your choice. We choose otherwise. [Hockey Buzz Hogwash]

• Steven Ovadia thinks a Game 6 win is possible for the Penguins. "But at this point, I don't see how they could ever win a game seven in Detroit. Unless they have a man on the inside putting pillows behind the Joe Louis boards." [Puck Update]

• Finally, Cabbie and his crew from The Score had to use more CGI than the "Speed Racer" movie to make this Nicklas Lidstrom interview interesting. But hey, it's something: