The Tampa Bay Buccaneers improved to 5-1 with a 28-22 win over the Philadelphia Eagles on Thursday Night Football.

Tampa Bay took a 28-7 lead in the third quarter and staved off Philadelphia's late comeback attempt. Tom Brady threw for 297 yards, two touchdowns and one interception, while Leonard Fournette rushed for 81 yards and two scores.

Jalen Hurts rushed for two touchdowns (and passed for one TD and one pick) for a struggling Philadelphia offense. The Eagles were outgained 399-213 as they fell to 2-4 on the year. 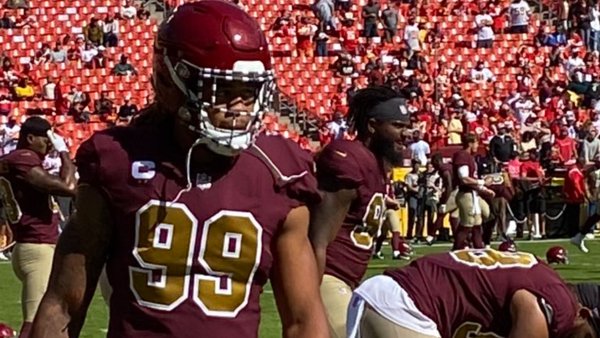 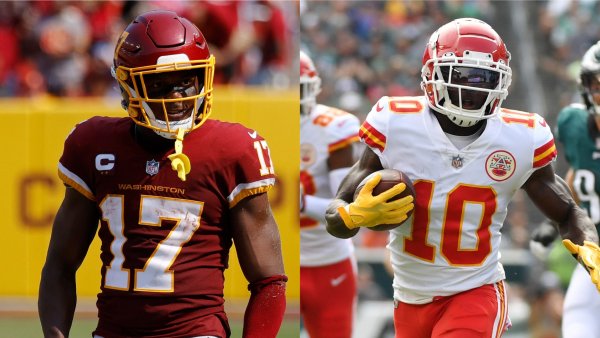 Week 6 is the first one with byes in the 2021 NFL season, so there are only 12 games on Sunday compared to the usual 14.

Sunday’s slate begins at Tottenham Hotspur Stadium in London with a Sunshine State showdown. Trevor Lawrence and the Jacksonville Jaguars head across the pond looking for their first win of the season when they take on the reeling Miami Dolphins.

Next on the docket are seven games in the 1 p.m. ET slot. The headliner is a QB battle between Lamar Jackson and Justin Herbert when the Baltimore Ravens host the Los Angeles Chargers. Elsewhere, Patrick Mahomes and the Kansas City Chiefs look to get back in the win column against the Washington Football Team, the red-hot Green Bay Packers head to Chicago to take on the rival Bears and the Minnesota Vikings battle the Carolina Panthers. The window also features Rams-Giants, Texans-Colts and Bengals-Lions matchups.

The 4 p.m. ET window features just three games. The Cleveland Browns will attempt to take down the NFL’s final unbeaten team in the Arizona Cardinals. Out west, the Las Vegas Raiders head to the Mile High City to face the Denver Broncos. Finally, Dak Prescott and the Dallas Cowboys will be in Foxboro looking to beat Mac Jones and the New England Patriots.

Sunday’s action concludes with a Super Bowl XL rematch between the Seattle Seahawks and Pittsburgh Steelers on Sunday Night Football. Both teams are hoping to avoid 2-4 starts.

The Buffalo Bills are back in primetime for Monday Night Football to take on the Tennessee Titans. Josh Allen and Co. are coming off an impressive rout in Kansas City in Week 5, while the 3-2 Titans are looking to build their lead in the AFC South standings.

Here’s a look at the full Week 6 schedule.

Lamar Jackson and Mark Andrews connected on a pair of fourth-quarter touchdowns and two-point conversions to tie the game and propel the Baltimore Ravens to a 31-25 overtime win over the Indianapolis Colts on Monday Night Football.

Jackson tossed a four-yard TD to Andrews with 45 seconds left, and the two then connected for the ensuing conversion, to even the score at 25-25 and erase what had been a 22-3 Indianapolis lead.

After the Colts' Rodrigo Blankenship missed a 47-yarder as time expired, Jackson led the Ravens downfield in overtime and threw a game-winning five-yard touchdown pass to Marquise Brown. Jackson went 37-for-43 with 442 yards and four touchdowns, and he also ran for 62 yards on 14 carries for the 4-1 Ravens.

Wentz went 25-for-35 for 402 yards and two touchdowns for the 1-4 Colts. Jonathan Taylor had 116 receiving yard and a touchdown on three catches, plus 53 rushing yards and a score on 15 carries.

In a rematch of last season's AFC Championship Game, the Buffalo Bills crushed the Kansas City Chiefs 38-20 on Sunday Night Football. Josh Allen threw for 315 yards and three touchdowns, while running for 59 yards and a score, as Buffalo cruised to their fourth straight win.

The two-time defending AFC champs from Kansas City committed four turnovers, with three coming from Patrick Mahomes. The Chiefs QB went 33 of 55 for 272 yards, two touchdowns and two picks. The most interceptions Mahomes has thrown in a season is 12, but he's already halfway to that number through just five weeks. And the Chiefs, who have been a dominant regular-season team in the Mahomes era, are under .500 for a second time this season at 2-3.

In the late afternoon window on Sunday, Justin Herbert racked up five touchdowns (four passing, one rushing) and 398 passing yards as the Los Angeles Chargers bested the Cleveland Browns in a shootout 47-42.

The New York Giants lost Daniel Jones, Saquon Barkley and Kenny Golladay to injuries before losing to the Dallas Cowboys 44-20.

Kyler Murray and the Arizona Cardinals were held to under 30 points for the first time this season, but they still remained unbeaten with a 17-10 win over the San Francisco 49ers in No. 3 overall pick Trey Lance's first NFL start. And fellow rookie signal caller Justin Fields led the Chicago Bears to a second straight victory, beating the Las Vegas Raiders 20-9.

The early slate of games was full of missed kicks -- and a few important makes.

The Cincinnati Bengals and Green Bay Packers matchup included five straight misses from the 2:14 mark in the fourth quarter through the 4:19 mark in overtime, with Evan McPherson and Mason Crosby each missing kicks in overtime. It was the first time since 1991 that there had been four missed kicks in a game after the 3:00 mark in the fourth.

It was Crosby who came through in the end, drilling a 49-yarder with 1:58 remaining in overtime to give the Packers a 25-22 win. It was the Packers' fourth straight win following a Week 1 loss to the New Orleans Saints.

The Minnesota Vikings eked out a 19-17 win over the Detroit Lions. Detroit scored a go-ahead two-point conversion with 37 seconds left in the game before Minnesota drove into field goal range. Greg Joseph hit the game-winning 54-yard kick as time expired, marking the second 50-plus-yard game-winner allowed by the winless Lions this season.

The New England Patriots also needed a late field goal to escape with a win on Sunday. Bill Belichick's squad ended its game against the Houston Texans on a 16-0 run, as kicker Nick Folk capped the game off with a 21-yarder with 17 seconds remaining to give the Patriots a 25-22 win.

The Philadelphia Eagles pulled off a comeback win in Carolina, as well. Jalen Hurts punched in a pair of rushing touchdowns to lead the Birds back from 12 points down and hand the Panthers their second straight defeat.

Urban Meyer and the Jacksonville Jaguars dropped to 0-5 on the season with their 37-19 defeat against the Tennessee Titans. Derrick Henry went off, scoring three touchdowns and racking up 130 yards on 29 carries to help the Titans improve to 3-2.

Elsewhere around the 1 p.m. ET window, the Tampa Bay Buccaneers pummeled the Miami Dolphins by a score of 45-17 behind Tom Brady's five passing touchdowns, the Pittsburgh Steelers picked up a bounce-back 27-19 win over the Denver Broncos and New Orleans earned a 33-22 road win over the Washington Football Team.

Action on Sunday began overseas. Matt Ryan, Kyle Pitts and the Atlanta Falcons held off Zach Wilson and the New York Jets for a 27-20 win in the NFL’s first London game since the start of the COVID-19 pandemic.

Week 5 ends when the Indianapolis Colts head to their former home of Baltimore to battle the Ravens. The Colts won their first game of the season in Week 4, while the Ravens are riding a three-game winning streak after losing in Week 1.

All NFL scores from previous games