The message coming from Logan Thomas was intended to be positive. For someone strictly reading the quote, it might've even come off that way.

But for those actually in the room with the Washington tight end as he was asked for his reaction to Ryan Fitzpatrick being knocked out of the 2021 opener with a hip injury, the discouragement in his voice was impossible to ignore.

"Business as usual, man," Thomas told reporters after Sunday's 20-16 loss at the hands of the Chargers. "We’ve been in this situation before ... Same old story, just like last year."

In 2020, the Burgundy and Gold used four quarterbacks, yet Ron Rivera's club still managed to win an NFC East title despite that constant rotation. 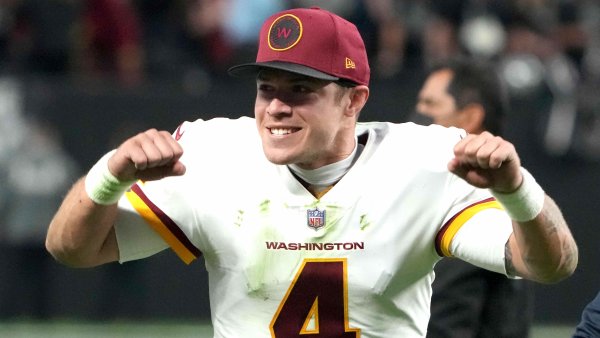 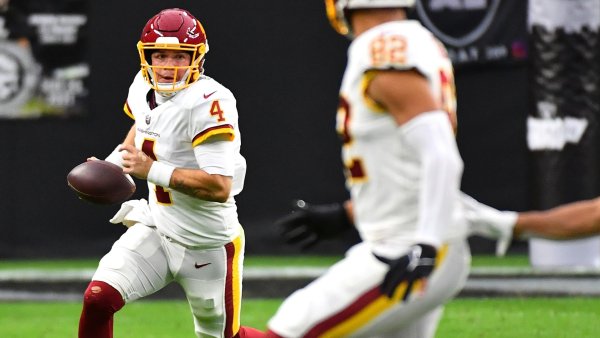 Hailey's Notebook: What Stood Out After Re-Watching Washington Vs. Las Vegas

The organization then went out and signed Fitzpatrick in March, and though Fitzpatrick's career is filled with incomplete seasons, the hope was that he could continue his late-career resurgence on an offense that was retooled and, in turn, provide some measure of much-needed stability at the position.Download and follow the Washington Football Talk podcast

That was the plan. The reality, meanwhile, is that Fitzpatrick lasted 21 minutes of game action before a Los Angeles edge rusher blasted him and ended his debut in the second quarter of Week 1.

Hello again, QB uncertainty. It's like you never even left.

Once Fitzpatrick walked — very, very slowly — to the home locker room, Taylor Heinicke came in to replace him. Heinicke, to his credit, once again jump-started coordinator Scott Turner's unit and finished the afternoon 11-of-15 for 122 yards and a score.

Afterward, Rivera praised the backup for performing well. He likely couldn't believe he had to praise him in the first place, though.

"When Taylor stepped in and brought some energy, I thought that was a huge plus," he said.

Heinicke took the podium a handful of minutes after Rivera's presser concluded, and in his time behind the microphone, he reflected on what allowed him to thrive in his out-of-the-blue opportunity.

"I think that the biggest thing is going out there with some confidence," Heinicke said. "Throughout the week, just preparing everyday gives you that confidence so that you’re prepared. I go out there and kind of play freely just knowing what we’re trying to accomplish. I felt like we were doing pretty good, but just came up a little short."

The initial reports on Fitzpatrick's ailment are that he suffered a hip subluxation, which NFL Network's Ian Rapoport labeled "a serious injury." As Washington gets set to face off against the Giants this Thursday, Heinicke will move from the bench to the first-string huddle. Kyle Allen is slated to slide in behind Heinicke.

And so, for yet another season, Washington will start multiple quarterbacks, just like they did in 2020, and 2019, and 2018 as well. The only question that remains is whether the number will stop at two or grow from there.

Thousands of more words could be written about what's happened to Washington passers in the past couple of campaigns, but those three from Thomas are definitely sufficient enough for now.