A disciplined squad could've taken out the Saints on Sunday at FedEx Field, but the Washington Football Team failed to display that quality on either side of the ball and instead dropped what was a supremely winnable game at home.

It's a result they very well could come back to haunt Washington in January when it's time to count up victories, too. 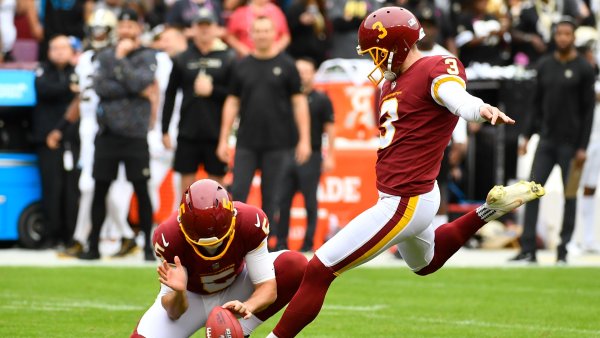 In the 33-22 loss to New Orleans, Taylor Heinicke tossed two unforgivable interceptions, while the defense had another inexplicable breakdown in the back end that led to a long touchdown and also allowed an impossibly easy Hail Mary to close out the first half.

And yet, for a brief spurt of the fourth quarter, it appeared as if Heinicke was going to figure out a way to overcome all those issues and deliver a victory, somehow. But Jack Del Rio's bunch couldn't get the stop it needed to in order to hand the offense one last opportunity, which made the final minutes of the contest trivial.

During the franchise's first year under Ron Rivera, the roster's defining trait was resilience. This year, they seem to still possess it — but it's being outweighed by an inability to handle simple tasks.

In the first quarter of the Week 5 matchup, Washington's secondary turned Deonte Harris loose for a 72-yard six-pointer, much like they turned Cordarrelle Patterson loose last week and other receivers loose before that.

One quarter later, Heinicke gifted a turnover to a Saints corner when trying to hit Curtis Samuel in the end zone. But that poor decision looked smart in comparison to his second pick of the afternoon, which came early in the fourth quarter deep in his own territory.

Rivera himself produced a decision worth questioning, when he opted to go for a fourth-and-10 instead of kick a 53-yard field goal soon after that Heinicke giveaway. The gamble didn't pay off, as Heinicke's pass fell incomplete.

Nothing, however, was more disheartening than Washington's effort — sorry, "effort" — to bat down Jameis Winston's last-second prayer to wrap up the second quarter. Those kinds of completions are supposed to be miraculous, but this one was rather mundane, thanks to a gaggle of defenders who failed to even jump off the ground to battle with Marquez Callaway, who ended up making the grab.

Now, this team finds itself in a 2-3 hole, with meetings with the Chiefs and the Packers in their immediate future, as well as a date with the Bucs looming just beyond that.

Between the quality of those opponents, the inconsistency of its quarterback and the startling decline of its defense, the organization can't be feeling optimistic about the next couple of months.

To even have a chance of beating those foes, Washington will first prove that it won't beat itself.