Major League Baseball commissioner Rob Manfred joined his interview like everyone else these days, via video conference software.

Manfred was in a little screen on the Dan Patrick Show on Friday to address a variety of topics as MLB tries to wrap its shortened season. A couple minutes into the interview, Patrick asked Manfred, “Where do we stand on the DH for next season?”

In essence, Manfred said it’s out.

“I think in all likelihood..we will return...I think all the COVID-related rule changes and in that bucket, it’s the extra-inning rule, the seven-inning doubleheaders, the DH in the National League, those rules we will return to the status quo after an agreement with the players’ association.”

Not much of a waffle there. It’s also somewhat surprising to see the designated hitter show up and evaporate in the National League. The push for it went on for years. Players finally moved to acceptance -- particularly in this pandemic-stricken season -- to test it out. Time of game was negatively influenced by the addition. So, it appears the permanency of the rule has been kicked to what will be brutish offseason talks in 2021 after the current collective bargaining agreement expires. 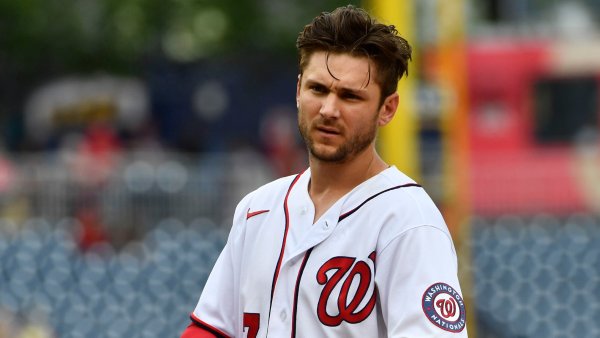 For now, it’s possible dismissal is a benefit for the Nationals.

When the rule was added before the season’s reboot, Washington appeared to be one of the benefactors. It had a glut of veteran infielders -- Ryan Zimmerman, Howie Kendrick, Asdrúbal Cabrera, Eric Thames -- and not enough spaces to play them. Adding the DH would allow Davey Martinez to rotate the group between first base, third base and DH. In theory, this would enable Martinez to put the hitters in matchup-positive spots while limiting their time on the field in an attempt at preservation.

Then, Zimmerman chose not to play. Kendrick was hurt. Cabrera had to take over at third. Thames struggled. What was expected to be a deep lineup became a shallow shell carried by Juan Soto and Trea Turner. The Nationals finished tied for last in the National League East division.

Turning the corner to 2021 leaves them with a variety of needs via free agency. And having one less spot to spend on will be a large benefit.

The Nationals could sign an outfielder, catcher, fourth starter, third baseman, first baseman and bullpen arm during free agency. That’s without concerns for a designated hitter. Kendrick and Zimmerman are mulling retirement. Thames will likely become a free agent after the Nationals decline their side of his mutual option. The empty spots are vast and the Nationals don’t need an extra one since they need to spend but also want to stay under the Competitive Balance Tax.

General managers and players also want an answer soon. Free agency starts at 9 a.m. the day after the World Series ends. Should teams pick up options because they need a designated hitter? Or can National League teams obtain more financial flexibility by the rule going away? And, what will the market for Nelson Cruz look like? He is 40 years old and continues to hit like crazy. No team wants him in the field. Thirty teams would be happy with his bat.

So, the Nationals will be waiting and hoping. Eliminating the designated hitter for 2021 would provide them extra money to rebound from the downturn of 2020. They just need a definitive answer from the league and MLBPA.