Daniel Gafford has come a long way in just a few months. As of March, he was out of favor in Chicago under new front office leadership and a new coaching staff. He was traded to Washington at the deadline where he became an instant boost, helping them go 17-6 in the 23 games he played en route to the NBA playoffs.

And now, less than seven months since he was dealt to the Wizards, he has a contract extension, one that will keep him in Washington through the 2025-26 season. The Wizards are buying stock in his future because they believe he can be a very good basketball player. But they also believe in who he is as a person, which was reflected in how other members of the organization reacted to Gafford's new deal. 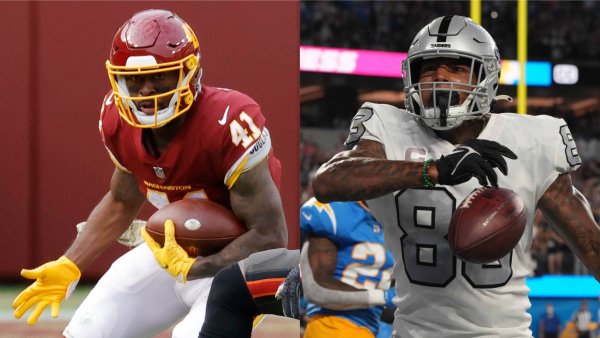 Alabama Edges Michigan for No. 1 Spot in College Football Playoff

General manager Tommy Sheppard honed in on Gafford's work ethic in a press release from the team:

“We’re very excited to extend Daniel’s contract and continue to see him develop within our system after his athleticism on both ends of the floor made such an immediate impact for us last season. We are confident that he has the character and drive to keep working hard to improve his overall game and become an even bigger part of what we are building with our team.”

Wizards head coach Wes Unseld Jr. has raved about Gafford ever since he was hired for the job in July. He came over from a Denver Nuggets organization that had built an above average defense under his watch. But they didn't have a rim-protector with the ceiling Gafford has.

Gafford and Unseld Jr. appear to be a perfect marriage between player and coach.

"I’ve seen it within the last month-and-a-half or two months, but I also saw it in the film I watched prior to getting the job. He’s a better player than he was last year," Unseld Jr. said. "He’s 23, so he’s still got to grow into his own and figure out his own game. But he’s shown the incremental steps thus far which are positive. It’s exciting to see his development and I think it’s an opportunity for him to grow."

Gafford is now set to grow with the organization for many years to come. The new contract is for three years, which will be added on top of the two years he has left on his deal. Gafford is under contract with the Wizards through his age-27 season.

Gafford has an intriguing future as a guy who has already shown flashes of being an elite rim-protector and lob threat. In his 23 games with the Wizards last season, he averaged 10.1 points, 5.6 rebounds and 1.8 blocks in 17.7 minutes. His per-36 numbers were All-Star caliber: 20.6 points, 11.3 rebounds, 3.6 blocks and 1.3 steals per game.

Gafford's numbers likely won't extrapolate perfectly once his role is increased this year as the team's starting center, but that provides a snapshot of what he could be if he played more. Given he did a good job this preseason of staying out of foul trouble (a problem for him in the past), there's reason to believe he can play more minutes and impact the Wizards even more going forward.

Unseld Jr. believes it will help that Gafford now doesn't have to worry about his contract future. Many athletes are asked after they sign new contracts whether a higher salary brings pressure, though often they respond with the opposite, that it takes pressure away because they know their financial futures are secure.

Gafford's is now much more secure than it was a few days ago. He's going to be a Wizards player for the next half-decade.

"We look at him as a foundational piece, a guy who we can move forward with. We have a lot of confidence in his ability. We expect a lot and with his potential, we can kind of dive in there and see what he’s got. I think it’s untapped," Unseld Jr. said.