Daniel Gafford Continues to Look Like Steal of Century for Wizards

Daniel Gafford said that after Thursday's 142-115 win over the Pacers, which advanced the Wizards out of the play-in tournament and into a first round playoff series against the Sixers, he had to take a moment.

"I was overwhelmed with a lot of emotion after the game. I had to kind of just hold it in... I would say this trade was the best thing that could have happened to me," he said. 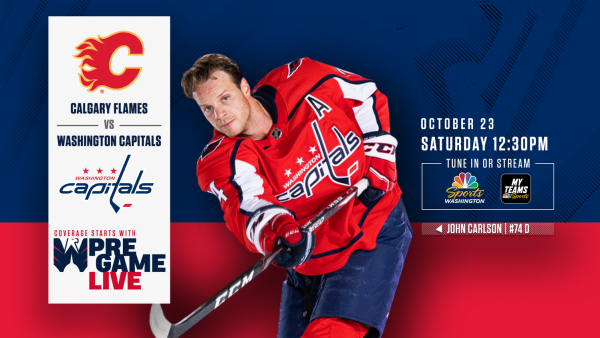 How to Watch Capitals Vs. Flames

After a dominant performance of 15 points, 13 rebounds and five blocks, Gafford thought back to two months before, when the Wizards brought him over from the Chicago Bulls at the March 25 trade deadline. Gafford was a second-round pick for the Bulls and had shown promise, but had fallen out of the rotation while playing for a new front office regime.

The Wizards traded former first round pick Troy Brown Jr. plus Moe Wagner for Gafford and Chandler Hutchison. Gafford, in particular, has thrived in his new surroundings, quickly proving to be an absolute steal for the Wizards. They won 17 of the 23 games he played, as he averaged 10.1 points, 5.6 rebounds and 1.8 blocks.

Gafford has been one of the best stories of the Wizards season, as he immediately gave them something they didn't have. He's 22 years old, an exceptional athlete and he produces consistently as a rim protector, rebounder and lob finisher.

Thursday, though, took it up a notch. This was a postseason game with the Wizards' season on the line and he came out with five blocks in the first half alone. No Wizards player had ever done that before in a postseason game.

"Really just going up and contesting as much as I can and helping my teammates if they got beat off the dribble," he said. "Just worrying about the main task at hand, that is protecting home."

Gafford built a wall behind the Wizards' perimeter defenders. All five of his blocks were not on big men. They were on players who got past the first line of defense.

That helped set a tone for the Wizards as they pulled away in the second quarter. They won the game 142-115 and led by as many as 38 points.

"He was great," Russell Westbrook said. "His energy, his athleticism is key for us, when he’s playing at that level and protecting the basket. He was huge for us tonight and he did an amazing job."

Head coach Scott Brooks has been around the NBA a long time, first as a player and now as a coach. He has unique experience in particular with young, talented players from his days in Oklahoma City where he coached Westbrook, Kevin Durant, James Harden and others.

Brooks could easily be jaded at this point when it comes to a young guy with athleticism. But there's something different about Gafford and he can see it.

"Special. His athleticism. Give him credit. He’s coachable, he wants to get better, he has an enthusiasm for the game. Smart kid, smart. Quiet, he’s quiet but you can get some stuff out of him. He comes up with some good basketball stuff and I like that about him. He’s still learning this game and I’m still learning him as a person. From what I’ve seen the last couple of months, that’s a big, big, big, big-time pickup by [general manager] Tommy [Sheppard] for our group," Brooks said.

As Brooks detailed, what stands out most about Gafford is not his athleticism. There are plenty of guys these days who are 6-foot-11 and can jump. It takes a lot more than that to carve out a long career in the NBA.

Gafford seems to possess all the intangibles - the instincts, the basketball IQ and the drive to make the most of his natural talents.

RELATED: Headlined by Gafford and Westbrook, Tommy Sheppard has Wizards on the right track

The drive element was on display during a first half timeout on Thursday night. While the rest of the team was going over a play with Brooks, Gafford was not set to check in, so he conferred with referee Ben Taylor under the rim. For several minutes, Gafford and Taylor talked through a play earlier in the game where Gafford had been called for a foul on Domantas Sabonis. Taylor demonstrated to Gafford what he could have done to avoid the whistle.

"I was really just asking what did I do wrong and what I could have done better in that situation. It helps me to learn in that situation because down the road, I’m going to have to be in the game and be able to withstand not fouling. The main thing I want to do is learn how to not foul. Sometimes I’m a foul magnet. I just want to put an end to that," Gafford said.

"He said if I were to jump with verticality, I wouldn’t get that foul. Those are the things, like talking to the ref, just learning and being able to turn that over to the game, that will help me stay in the game longer."

That sounds like a guy who is serious about his craft, like someone who intends on tapping into every ounce of his potential.

It also sounds like great news for the Wizards' future.