Trump stressed the need for higher standards, even as he hailed the majority of officers as selfless public servants and made clear in his remarks that he is still the "law and order" president

Following weeks of national protests since the death of George Floyd, President Donald Trump signed an executive order Tuesday that he said would encourage better police practices. But he made no mention of the roiling national debate over racism spawned by police killings of black men and women.

Trump met privately with the families of several black Americans killed in interactions with police before his Rose Garden signing ceremony, and said he grieved for the lives lost and families devastated. But then he quickly shifted his tone and devoted most of his public remarks to a need to respect and support “the brave men and women in blue who police our streets and keep us safe.”

He characterized the officers who have used excessive force as a “tiny” number of outliers among “trustworthy” police ranks.

With nationwide protests for racial justice still reverberating, signs of action are emerging across the country.

“Reducing crime and raising standards are not opposite goals," he said before signing the order, flanked by police officials.

Trump and Republicans in Congress have been rushing to respond to the mass demonstrations against police brutality and racial prejudice that have raged for weeks across the country in response to the deaths of Floyd and other black Americans. It's a sudden shift that underscores how quickly the protests have changed the political conversation and pressured Washington to act.

But Trump, who has faced criticism for failing to acknowledge systemic racial bias and has advocated for rougher police treatment of suspects in the past, has continued to hold his 'law and order." line. At the signing event, he railed against those who committed violence during the largely peaceful protests while hailing the vast majority of officers as selfless public servants.

Trump’s executive order would establish a database that tracks police officers with excessive use-of-force complaints in their records. Many officers who wind up involved in fatal incidents have long complaint histories, including Derek Chauvin, the white Minneapolis police officer who has been charged with murder in the death of Floyd. Those records are often not made public, making it difficult to know if an officer has such a history. 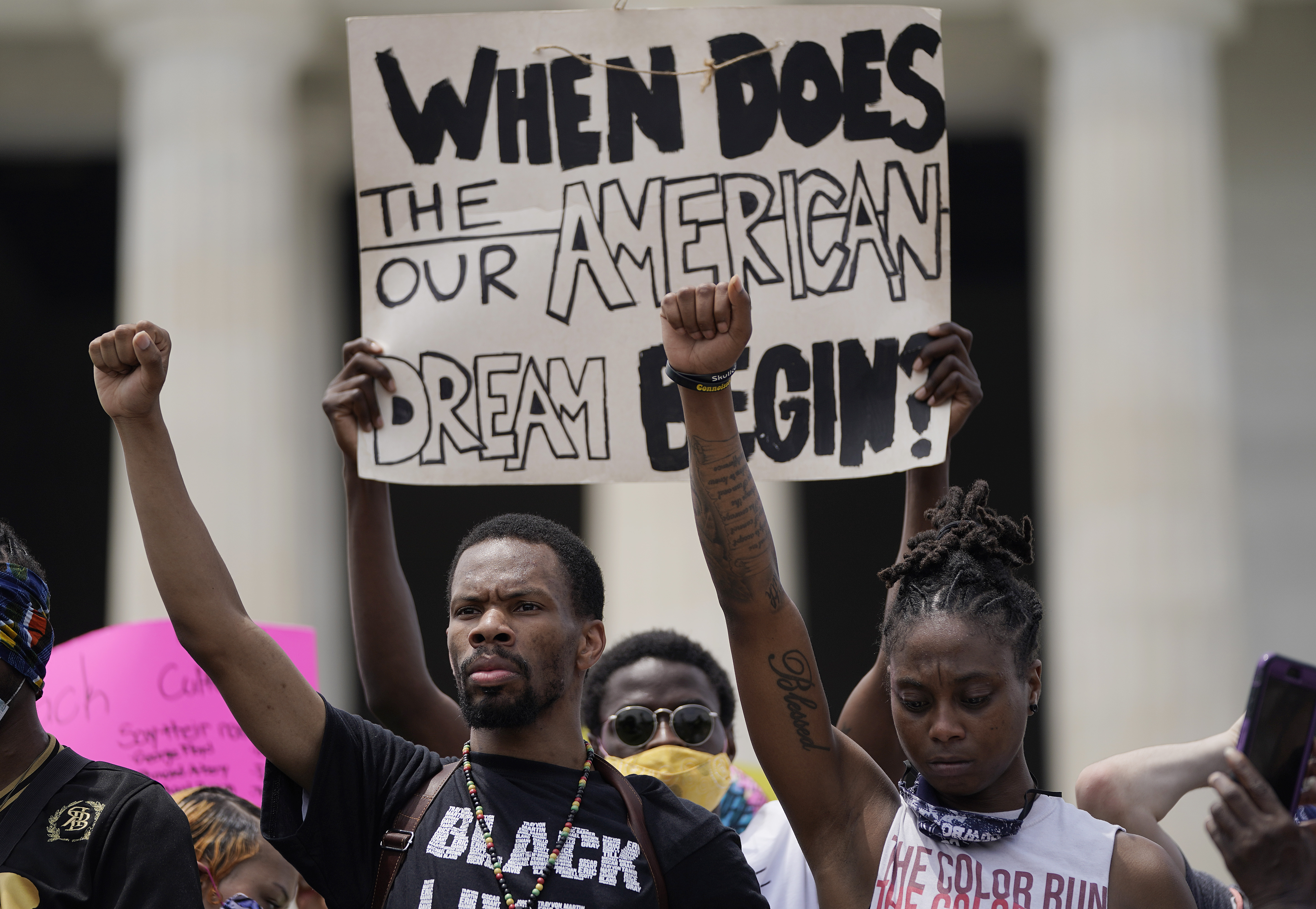 Justice in Policing: What's in the Democrats' Police Reform Bill?

The order would also give police departments a financial incentive to adopt best practices and encourage co-responder programs, in which social workers join police when they respond to nonviolent calls involving mental health, addiction and homeless issues.

Trump said that, as part of the order, the use of chokeholds, which have become a symbol of police brutality, would be banned “except if an officer’s life is at risk." Actually, the order instructs the Justice Department to push local police departments to be certified by a “reputable independent credentialing body" with use-of-force policies that prohibit the use of chokeholds, except when the use of deadly force is allowed by law. Chokeholds are already largely banned in police departments nationwide.

While Trump hailed his efforts as “historic,” Democrats and other critics said he didn't go nearly far enough.

Senate Democratic leader Chuck Schumer said, “One modest inadequate executive order will not make up for his decades of inflammatory rhetoric and his recent policies designed to roll back the progress that we’ve made in previous years.”

Democratic House Speaker Nancy Pelosi said the order “falls sadly and seriously short of what is required to combat the epidemic of racial injustice and police brutality that is murdering hundreds of Black Americans.”

Kristina Roth at Amnesty International USA said the order “amounts to a Band-Aid for a bullet wound."

But Trump said others want to go to far. He, framed his plan as an alternative to the “defund the police” movement to fully revamp departments that has emerged from the protests and which he slammed as “radical and dangerous."

“Americans know the truth: Without police there is chaos. Without law there is anarchy and without safety there is catastrophe," he said.

At the funeral for George Floyd, Floyd's niece Brooke Williams gave an emotional speech about the systemic injustice that led to her uncle's death, saying, "These laws need to be changed. No more hate crimes, please. Someone said, 'Make America Great Again'. But when has America been great?"

Trump's audience included police officials and members of Congress, and came after he met privately at the White House with the families of men and women who have been killed in interactions with police.

White House press secretary Kayleigh McEnany told reporters that many tears were shed at the meeting and “the president was devastated.” Trump listed the families' relatives who died and said: "To all the hurting families, I want you to know that all Americans mourn by your side. Your loved ones will not have died in vain.”

White House adviser Ja’Ron Smith said it was “a mutual decision” for the families not to attend the public signing. “It really wasn’t about doing a photo opportunity,” he said. "We wanted the opportunity to really hear from the families and protect them. I mean I think it’s really unfortunate that some civil rights groups have even attacked them for coming.”

The White House action came as Democrats and Republicans in Congress have been rolling out their own packages of policing changes. Sen. Tim Scott of South Carolina, the sole African American Republican in the Senate, has been crafting the GOP legislative package, which will include new restrictions on police chokeholds and greater use of police body cameras, among other provisions.

While the emerging GOP package isn't as extensive as sweeping Democratic proposals, which are headed for a House vote next week, it includes perhaps the most far-reaching proposed changes ever from a party that often echoes Trump's “law and order” rhetoric.

It remains unclear whether the parties will be able to find common ground. Though their proposals share many similar provisions — both would create a national database so officers cannot transfer from one department to another without public oversight of their records, for instance — differences remain.

The Republican bill does not go as far as the Democrats' on the issue of eliminating qualified immunity, which would allow those injured by law enforcement personnel to sue for damages. The White House has said that is a step too far. As an alternative, Scott has suggested a “decertification” process for officers involved in misconduct.

During the Obama administration, Attorney General Eric Holder opened a series of civil rights investigations into local law enforcement practices that often ended with court-approved consent decrees that mandated reforms. Those included Ferguson, Missouri, after the killing of Michael Brown and Baltimore following the police custody death of Freddie Gray.

Hours before he resigned as Trump’s first attorney general in November 2018, Jeff Sessions signed a memo that sharply curtailed the use of consent decrees.