President-elect Joe Biden on Monday told Georgia Democrats they had the power to “chart the course” for a generation as President Donald Trump urged Republican voters to "swamp" the polls ahead of runoff elections that will determine control of the U.S. Senate.

Trump made his final-hours pitch to voters at a nighttime rally in north Georgia, where Republicans were banking on strong voter turnout Tuesday to reelect Sen. Kelly Loeffler and David Perdue and hold control of the chamber.

Biden campaigned with Democrats Jon Ossoff and Raphael Warnock in Atlanta, hoping he could recreate the coalition that secured him a narrow victory in the presidential race in November.

“Folks, this is it. This is it. It’s a new year, and tomorrow can be a new day for Atlanta, for Georgia and for America,” Biden said at a drive-in rally. “Unlike any time in my career, one state — one state — can chart the course, not just for the four years but for the next generation.”

The stakes have drawn hundreds of millions of dollars in campaign spending to a once solidly Republican state that now finds itself as the nation’s premier battleground. Biden won Georgia’s 16 electoral votes by about 12,000 votes out of 5 million cast in November, though Trump continues pushing false assertions of widespread fraud that even his now-former attorney general and Georgia’s Republican secretary of state — along with a litany of state and federal judges — have said did not happen.

The president’s trip Monday comes a day after disclosure of a remarkable telephone call he made to the Georgia secretary of state over the weekend. Trump pressured Republican Brad Raffensperger to “find” enough votes to overturn Georgia’s election results ahead of Wednesday’s joint session of Congress that will certify Biden’s Electoral College victory. The call highlighted how Trump has used the Georgia campaign to make clear his continued hold on Republican politics.

Angry after the Raffensperger call, Trump floated the idea of pulling out of the rally but was persuaded to go ahead with it so he will have a chance to reiterate his claims of election fraud. Republicans are wary as to whether Trump will focus only on himself and fail to promote the two GOP candidates.

But Trump, at the rally in Dalton, Georgia, spent much of his address on message, making an impassioned case that Loeffler's and Perdue's races were among the most important Georgia voters would ever face and made the case that "the fate of our country is at stake.” 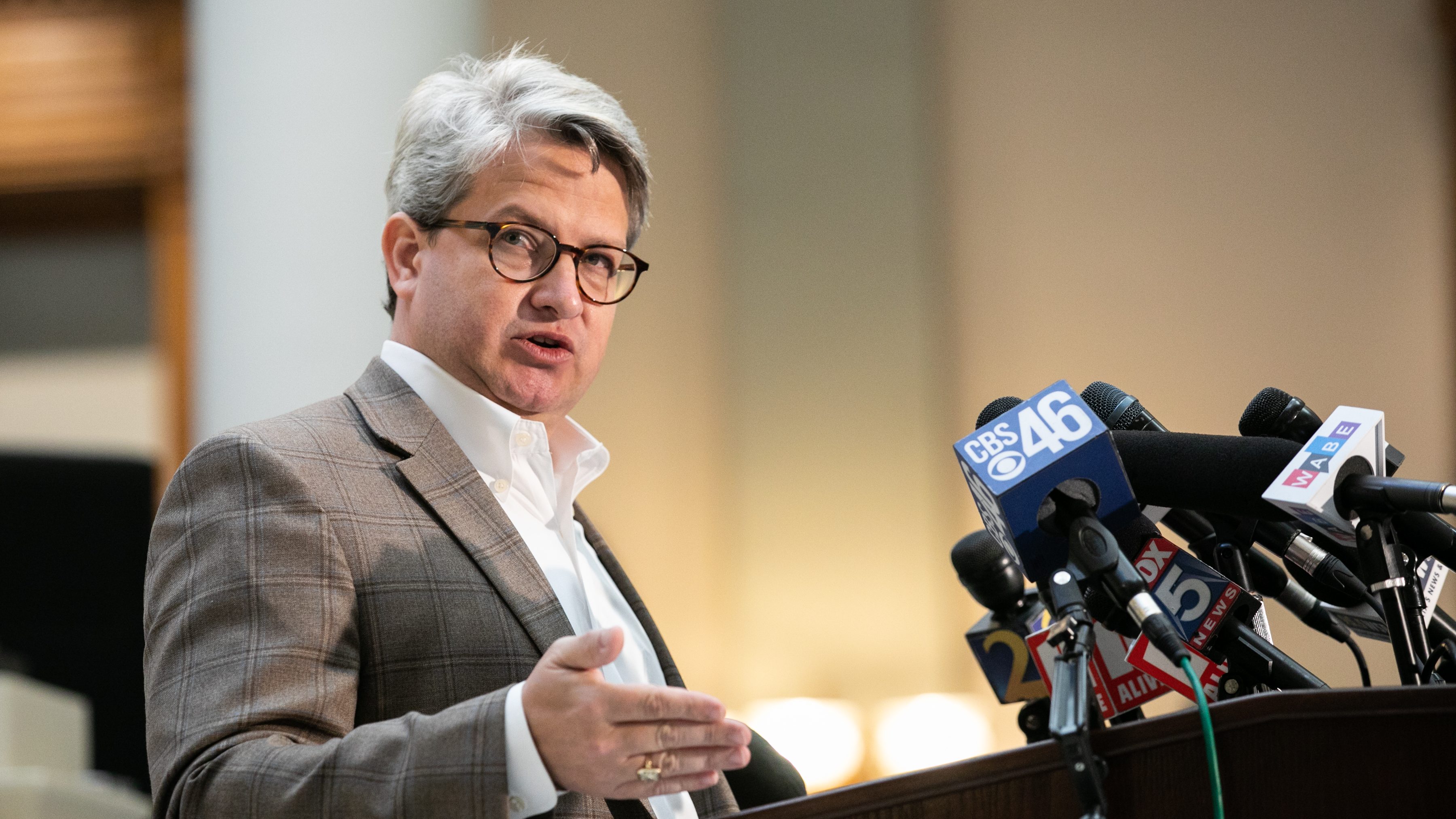 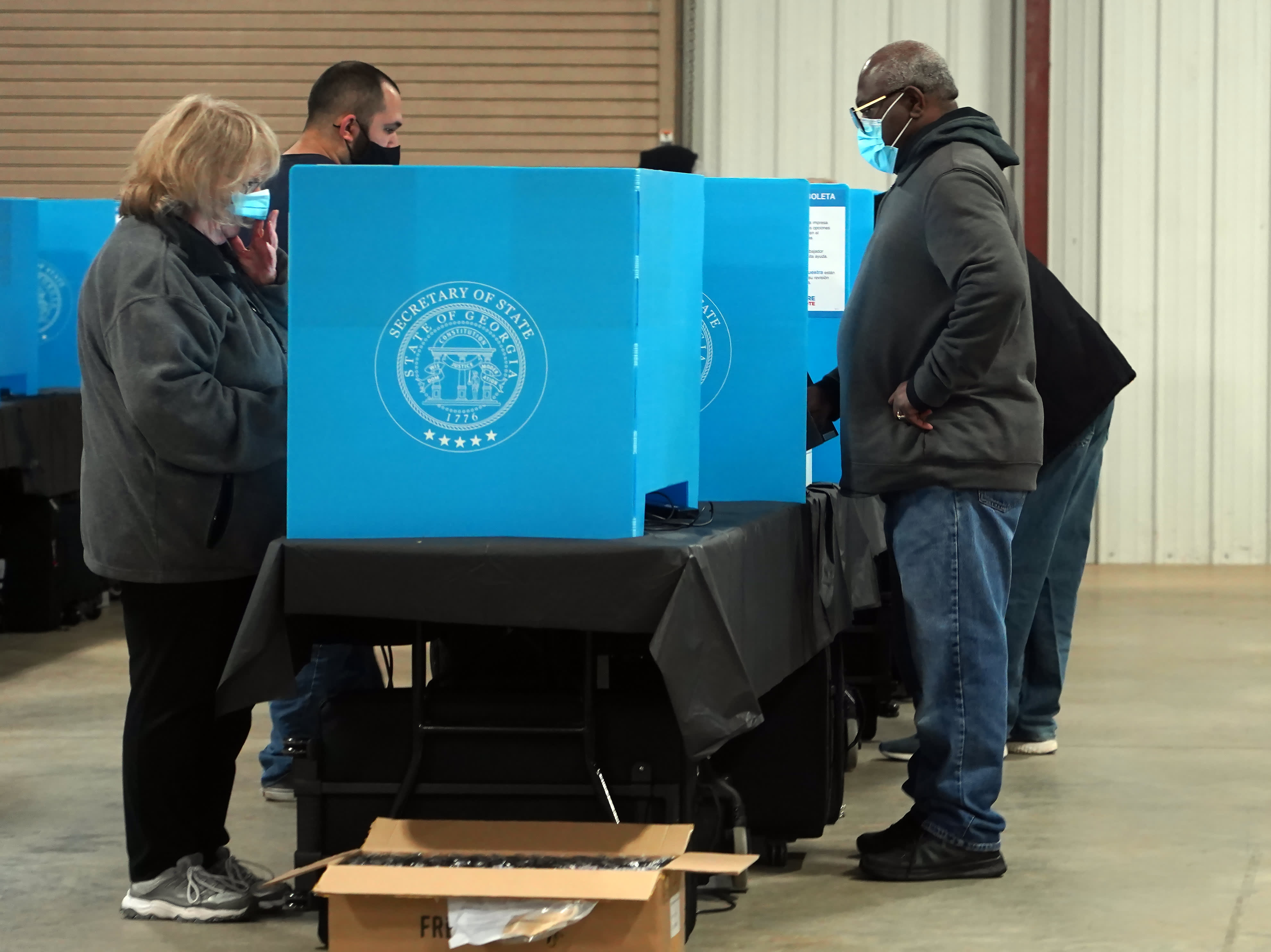 Here We Go Again: What to Expect as Georgia Counts Votes

To be sure, he also spent a fair amount of time rehashing false claims that the November election was “rigged." He fumed that Republican Gov. Brian Kemp was “incompetent" and replayed many of the same debunked claims that he raised days ago in his call with Raffensperger.

"The Democrats are trying to steal the White House, you cannot let them," Trump said. “You just can’t let them steal the U.S. Senate, you can’t let it happen.”

Biden said he needs a Senate majority to pass legislation to combat the coronavirus, and he blasted Perdue and Loeffler as obstructionist Trump loyalists. Loeffler says she will join other Republican lawmakers in objecting to the Electoral College certification of Biden's victory by Congress on Wednesday.

“You have two senators who think they’ve sworn an oath to Donald Trump, not the United States Constitution,” Biden said.

Earlier Monday, Vice President Mike Pence told a crowd of conservative Christian voters at a campaign event in Milner, Georgia, to stop a Democratic takeover in Washington. “We’re going to keep Georgia, and we’re going to save America,” Pence said at Rock Springs Church in Milner.

Millions of Georgia residents have already cast their ballots for Tuesday's Senate runoff races, but according to a recent poll, Gen Z and Millennials are lagging other age groups. NBCLX's political storyteller Noah Pransky explains what this tells us about the election that will determine control of the U.S. Senate and our country's next two years.

Perdue addressed the church crowd in Milner by telephone while quarantining over coronavirus exposure, claiming that “the very future of our republic is on the line” and declaring the duty to vote “a calling from God.”

Trump amplified the sentiment, warning that Ossoff and Warnock wins would lead to a sharp leftward swing in American policy making.

“These Senate seats are truly the last line of defense,” Trump said. He added, “It's really fight for our country, not a fight for Trump.”

Republicans need just one victory to maintain Senate control and force Biden to contend with divided government. Democrats need a sweep for a 50-50 split, giving the tiebreaking vote to Vice President-elect Kamala Harris, who will succeed Pence as the Senate’s presiding officer. That would give Democrats a Senate majority to go along with their control of the House and executive branch.

Pence, who will preside over Wednesday's congressional joint session, sidestepped Trump's denials Monday until a man yelled out that he must “do the right thing on Jan. 6.” Pence promised that “we'll have our day in Congress,” though he offered no details about what that might mean. Scores of Republicans in Congress have pledged to protest the Electoral College count, but Pence has no legal authority to override Biden's win.

Facing those passions from the Republican base, Perdue, whose first Senate term expired Sunday, and Loeffler, an appointed senator trying to win her first election, have run as unabashed Trump Republicans and spent the two-month runoff blitz warning of a “radical” and “dangerous” lurch to the left.

Ossoff and Warnock have countered with warnings that a Republican Senate will stymie Biden's administration, especially on pandemic relief.

Warnock pushed back at the deluge of Loeffler television ads casting him as a socialist. “Have you noticed she hasn’t even bothered to make a case, Georgia, for why you should keep her in that seat?" Warnock said, speaking ahead of Biden. “That’s because she has no case to make.”

A closely divided Senate — with the rules still requiring 60 votes to advance major bills — lessens the prospects of sweeping legislation regardless. But a Democratic Senate would at least assure Biden an easier path for top appointees, including judges, and legitimate consideration of his legislative agenda. A Senate led by McConnell would almost certainly deny even an up-or-down vote on Biden’s most ambitious plans.

More than 3 million Georgians already have voted. Monday's push focused on getting voters to the polls Tuesday. Democrats ran up a wide margin among 3.6 million early votes in the fall, but Republicans countered with an Election Day surge, especially in small towns and rural areas. 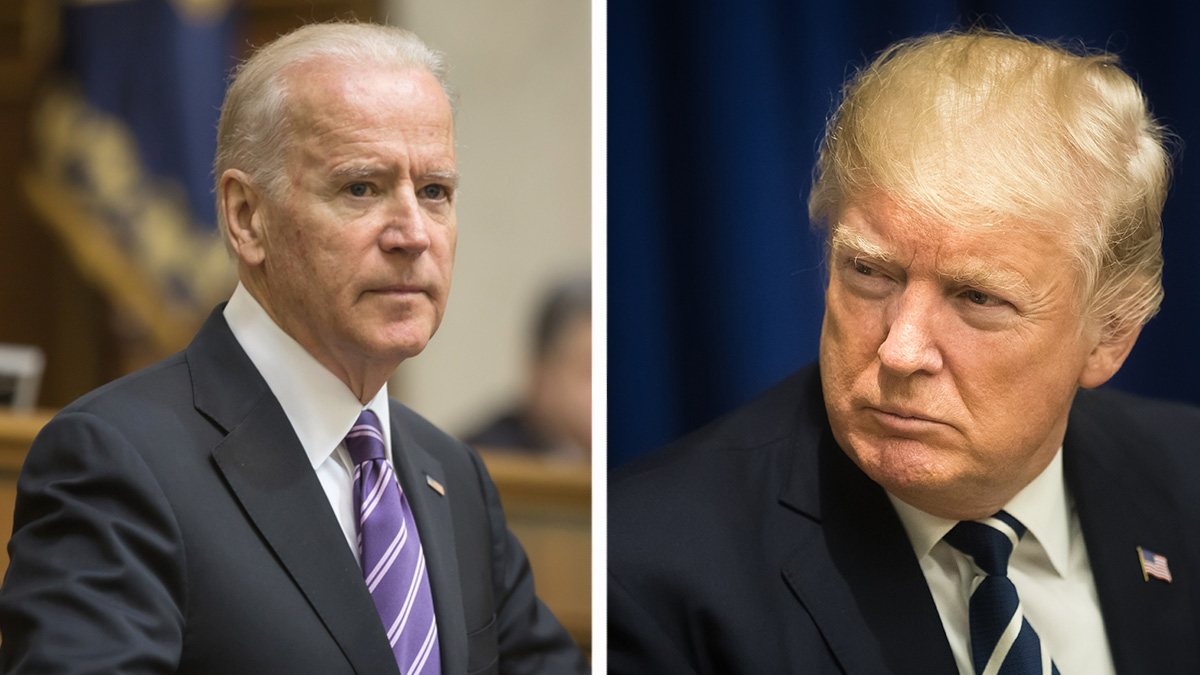 Wild Week in Politics Kicks Off 2021 With Battles Over the Georgia Senate Runoff, Electoral College Certification

Here Are the Issues at Play in the Georgia Senate Runoffs