D.C. Council Chairman Kwame Brown has been charged with fraud, becoming the second council member to be charged by the D.C. Attorney's Office this year.

Sources close to Brown told News4's Tom Sherwood that he has submitted his letter of resignation. The letter will go to the D.C. Board of Elections and Ethics, whch will declare a vacancy, which sets in motion a special election within 114 days.

The charge against Brown is linked to his personal finances -- specifically a home equity loan that Brown secured in 2006 for his home in Hillcrest. D.C. prosecutors claim he overstated his income on loan applications by tens of thousands of dollars to secure the home equity loan and to buy his boat, Bullet Proof. (Photo courtesy of Mike DeBonis, Washington Post.)

According to court documents, Brown conducted the scheme from August 2005 through August 2007.

The single count of bank fraud was filed in federal court today in a criminal information, a charging document that usually signals a defendant's intent to plead guilty.

A plea hearing was scheduled for Friday, the Associated Press reported.

Brown on Tuesday said he had no plans to resign, but when he met in private with his staff and then with council members and his attorney, Fred Cooke, he reportedly told them he would resign, apologizing and emphasizing that the charge didn't pertain to his public duties.

Brown did not comment to reporters as he left the Wilson Building.

News4 obtained a copy of his resignation letter:

I hereby resign my position as Chairman of the Council of the District of Columbia effective immediately. I have made some very serious mistakes in judgment for which I will take full responsibility.

Because of the great respect that I have for the institution that is the Council of the District of Columbia, I have chosen the only honorable course in submitting my resignation at this time. I simply will not hold this body, and its important work hostage to the resolution of my personal indiscretions.

I have behaved in ways that I should not have. I was wrong, and I will face the consequences of that conduct. I have apologized to the residents of our great city, and I also offer my unconditional apology to the members of the Council for all of the negative attention that my conduct has brought about.

Brown will have a formal statement Thursday. His staff said he told them the council will meet in about a week to replace him with a temporary chairman.

“In accordance with Section 401(b)(3) of the Home Rule Act, I plan to convene the entire Council for a special meeting next Wednesday, June 13th, when we will adopt a resolution to elect an Interim Chair and Interim Chair Pro Tempore. Under the Home Rule Act, both positions will be selected from among the at-large members. Consequently, after their election, I will step aside as Chair Pro Tempore. The meeting will be open to the public. 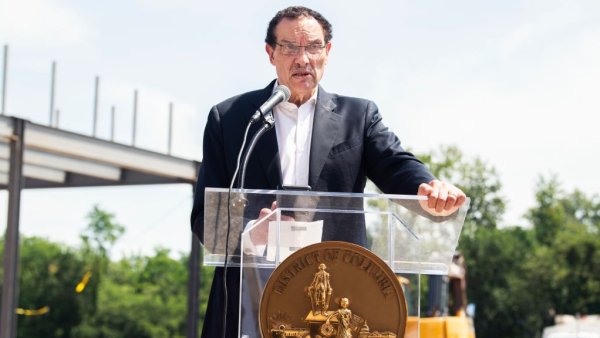 "I’m shocked, I'm disappointed, I'm saddened," Mayor Vincent Gray told News4 Wednesday evening. "I was elected to the council at the same time Chairman Brown was elected. I served with him the entire time that I was on the council. This is not something that I ever would have imagined could occur."

"Everybody's mood is quite somber," Council member Tommy Wells said, "but we're focused on the integrity and stability of our government."

Brown is also being investigated for possible corruption during his 2008 re-election campaign. He said Tuesday he does not believe he did anything wrong in that campaign.

Brown is the second D.C. Council member to be charged by the D.C. Attorney’s Office this year. Harry Thomas Jr. was recently sentenced to 38 months in prison after pleading guilty to using city dollars for personal use.

The charges come as federal prosecutors continue investigating the 2010 campaign of Mayor Gray. Two aides on that campaign have pleaded guilty in that investigation.

During his 2010 campaign for council chair, court documents revealed significant credit card overspending by Brown and court cases to recapture more than $50,000 in overdue payments, late fees and attorney costs. He told News4 then that he and his wife had been "living beyond our means."

Once he took office, his taxpayer-funded, fully-loaded Lincoln Navigators -- two were ordered because he was reportedly particular about the SUV's color scheme -- drew criticism and caused a media frenzy. Brown returned the SUVs to the Department of Public Works and apologized, saying he didn't realize how expensive the vehicles were.