Some Democrats Fear Fallout From Sanders Atop the Ticket

In anxious huddles around the Capitol, apprehensive Democrats are sharing their worries that Sanders' socialist label

Sen. Bernie Sanders' robust start in the race for the presidential nomination is triggering alarm among congressional Democrats, with many warning that a ticket headed by the self-declared socialist could be devastating to the party's chances of winning the Senate and holding the House in November.

In anxious huddles around the Capitol, apprehensive Democrats are sharing their worries that Sanders' socialist label and unyielding embrace of controversial proposals like "Medicare for All" and the Green New Deal will repel voters in the affluent, moderate districts that flipped House control in 2018 and in closely divided states where Republican senators are vulnerable.

The Vermont independent narrowly won New Hampshire Tuesday on the heels of a strong showing in Iowa and is widely seen as a front-runner, along with former South Bend, Indiana, Mayor Pete Buttigieg.

"I'm a proud capitalist," said freshman Rep. Ben McAdams, D-Utah, in pointed contrast with Sanders. McAdams, who is supporting former New York City Mayor Michael Bloomberg and whose Salt Lake City district will be among the toughest for Democrats to defend, said having a liberal like Sanders atop his party's ticket "would probably give me more opportunities to show my independence" from the party.

Another freshman from a competitive district, Rep. Tom Malinowski, D-N.J., said Democrats need a presidential nominee who "doesn't scare all those future former Republicans more than Trump scares them." And while acknowledging that Republicans plan to tar all Democrats with the socialist label, "There's one candidate for whom that would not be a lie."

Rep. Dina Titus, D-Nev., who backs the candidacy of former Vice President Joe Biden, warned a group of Democratic voters this week in Carson City, Nevada, that with Sanders atop the ticket, "you're not going to take back the Senate. There's not any way, because everybody's going to be tarred with the same brush. We will probably lose seats in the House."

In private conversations, other Democrats are more succinct. One House Democrat said colleagues from swing districts are scared by the prospects of a Sanders nomination, while another said moderates are increasingly concerned that a Sanders candidacy would devastate their prospects for winning the White House and retaining the House. The lawmakers insisted on anonymity to describe private conversations.

Democrats' jitters have Republicans rubbing their hands in delight. Steyer Ready to ‘Shock the World' in Nevada's Wide-Open Race 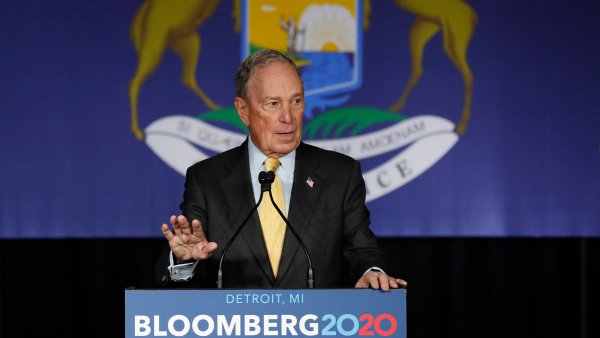 2020ers Look to Super Tuesday Even as 2 Other States Loom

Republicans face an uphill fight in capturing control of the House, which Democrats lead 232-197, with one independent and five vacancies. The GOP controls the Senate 53-47 and is favored to retain its majority.

Biden supporters are happy to use apprehension about Sanders' impact on the party's strength in Congress as a tool for drumming up support.

Rep. Ami Bera, D-Calif., who’s endorsed Biden, said if Sanders were nominated, Democrats from moderate districts "might actually have to run away from our nominee to get elected." And he added, "It’s highly unlikely that Bernie Sanders will moderate his views, either."

Congressional Democrats have little to gain by openly disparaging the man who could well be their presidential nominee, and they say they're uncertain what they could do that would be effective. Any move to derail his candidacy that could be traced back to them would undoubtedly enrage Sanders and his impassioned supporters and risk the fury that split the party in 2016, when some Sanders backers never supported Hillary Clinton, the Democratic nominee.

Underscoring a reluctance to speak critically of Sanders, Rep. Cheri Bustos, D-Ill., chairwoman of House Democrats' campaign arm, sidestepped questions about how his nomination would affect her candidates' prospects. "We have a long way to go before we know who our nominee is," she said.

Asked how many nervous lawmakers have expressed their worries about Sanders to her, Bustos paused for four seconds before answering, "We have discussions about the nominee but, you know, it runs the gamut."

While many Democrats are reluctant to openly express dismay about Sanders, members of the House have spoken with their feet.

According to the website fivethirtyeight.com, Sanders has endorsements from only seven House members, all members of the progressive caucus from safely Democratic districts. Biden, in contrast, has backing from 41 House members, and has made a point of touting support from seven lawmakers from swing districts. Bloomberg, who hopes to poach Biden's position as the moderate alternative to Sanders, has racked up 11 endorsements from House lawmakers, five of whom occupy swing seats.

Progressives argue the fears are overblown. Republicans tried to tie Democrats to socialism and liberal causes like Medicare for All during the 2018 campaign, they note, yet Democrats won a resounding majority in the House. And they argue that nominating Sanders could change the electorate in ways that help the party.

"They don't want somebody that sells out," said Sanders backer Rep. Rashida Tlaib, D-Mich., a member of the "squad" of young liberal freshmen. She added, "Please don't talk about only persuading Trumpers and independents" to be open to an alternative candidate. "How about persuading the Democrats that haven't been engaged."

"The single most important thing for Democrats to take back the Senate is turnout," said Mike Lux, a liberal strategist who supports Massachusetts Sen. Elizabeth Warren in the presidential race. "We have to have a highly energized Democratic base turnout, a lot of young people coming out, voting not just in the presidential race but further down the ballot."

Yet Sanders' agenda is far from shared. Several top-tier Democratic Senate recruits, such as former astronaut Mark Kelly in Arizona, former state Sen. Cal Cunningham in North Carolina and former Gov. John Hickenlooper in Colorado, have explicitly distanced themselves from core Sanders positions like Medicare for All.

Hickenlooper, the likely Democratic nominee against Republican Sen. Cory Gardner, targeted Sanders during his own brief bid for the party's presidential nomination last year. At a Democratic debate last summer, Hickenlooper warned that Sanders' program would be "a disaster" at the ballot box.

"If you force Americans to make these radical changes," Hickenlooper said, "they're not going to go along."

Gardner, widely considered the most endangered Republican senator, has been openly pining for Sanders to be the nominee. "In 2018, Cory said 'the most dangerous thing to happen in America in the 2016 presidential election was Bernie Sanders' normalization of socialism,'" Gardner campaign spokesman Jerrod Dobkin said. "Two years later, Cory's been proven right."

Democrats skeptical of Sanders stressed that the nominating process has just begun.

Sen. Doug Jones of Alabama, who is considered the most endangered Democratic Senate incumbent this year, has endorsed Biden, a longtime friend. He said he wouldn't play "what-if games" about the top of the ticket and how it might affect his chances in deep-red Alabama.