With no audience to cheer or boo them back on track, the only Democrats left on the 2020 presidential debate stage sometimes got lost in spats over their records

They came together to bump elbows, then retreated by six feet — and stood there in awkward silence.

The visual, dictated by the threat of coronavirus, came to define Sunday's audience-free debate as Democrats Joe Biden and Bernie Sanders struggled to step together against President Donald Trump in the time of COVID-19. They agreed on much, especially on the need for stronger leadership amid a rampaging virus. And when asked if they would choose a woman for a running mate, Biden pledged to do so and Sanders said he would "in all likelihood."

But with no audience to cheer or boo them back on track, the only Democrats left on the 2020 presidential debate stage sometimes got lost in spats over their records on health care for seniors, guns and preserving Social Security. At times, they were left to yell in a nearly empty television studio as millions of self-isolating Americans watched, remotely.

Former Vice President Joe Biden discusses how he would handle the coronavirus pandemic if he was elected president.

"Join me," the former vice president, 77, said at one point to the senator from Vermont.

It often wasn't the unifying performance many Democrats wanted after a bruising primary that set progressives and moderates against each other, with ousting Trump their main area of agreement. The logistics already were extraordinary. Days earlier, CNN and Univision changed the venue from Arizona to a studio in Washington, D.C., with only a few producers and three moderators in the room with the candidates.

The arrangement was in line with government recommendations against cross-country travel and big gatherings to reduce the chance of spreading the virus. The Centers for Disease Control and Prevention on Sunday urged no gatherings of 50 or more people.

Democratic candidate for president, Bernie Sanders discusses the coronavirus pandemic and the need to come together and listen to the experts, not the politicians.

Biden, the front-runner, and Sanders had no way of knowing how they were doing on the debate stage, and had no audience energy to draw from. That may have been more of an issue for Sanders after two presidential campaigns — in 2016 against Hillary Clinton and this year — that called for "revolution" with raucous rallies and speeches.

"Last night, we had a fireside chat, not a rally," Sanders said. "I love doing rallies and we bring many thousands of people out to our rallies. I enjoy it very much. We’re not doing that right now."

Sanders still spoke with his arms and hands, but he seemed toned down.

Biden, the face of the Democratic establishment, showed up in a blue suit, white shirt and red tie and cut a far more still figure, often with a hand in his pocket and a pen in his hand as Sanders spoke. 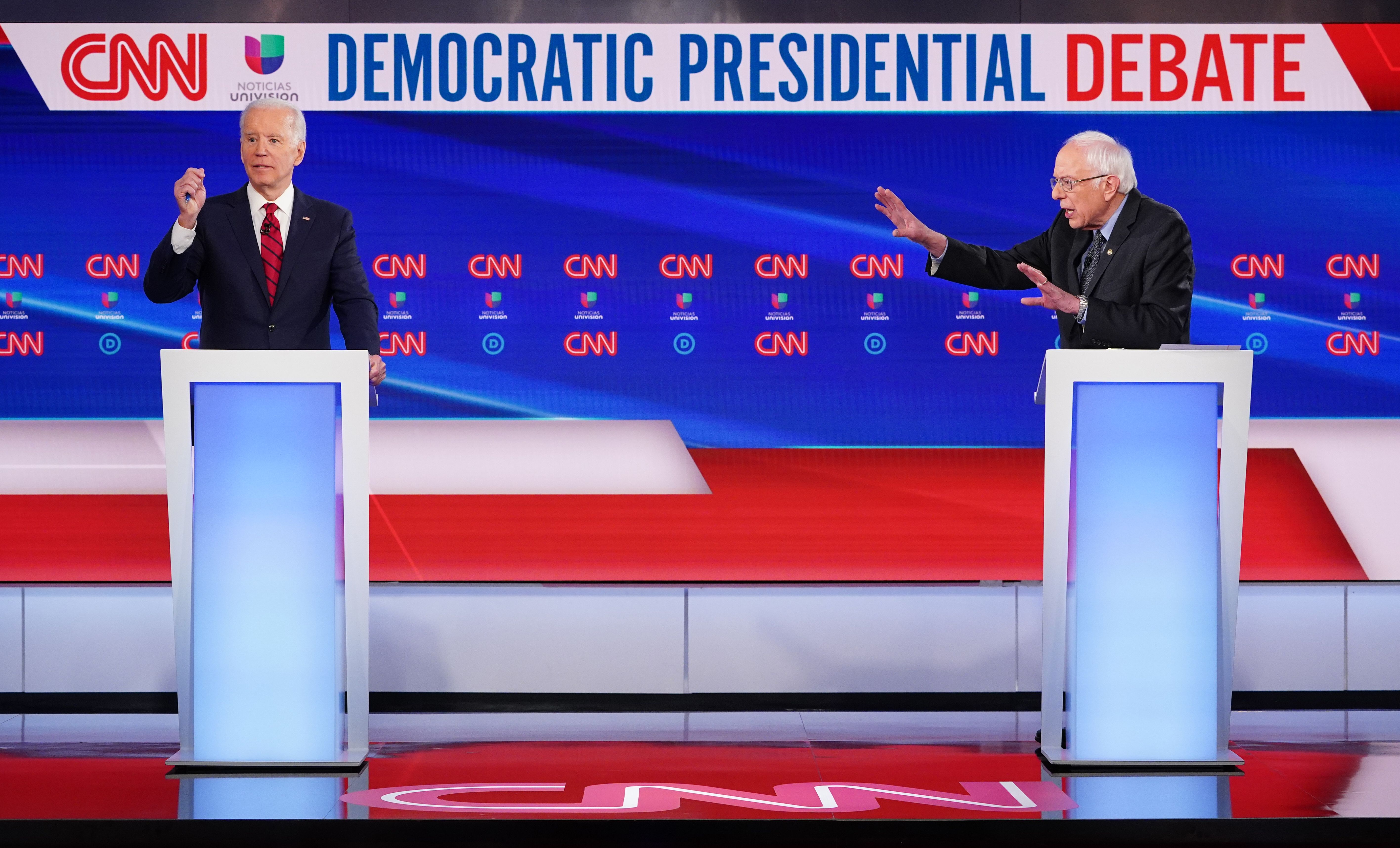 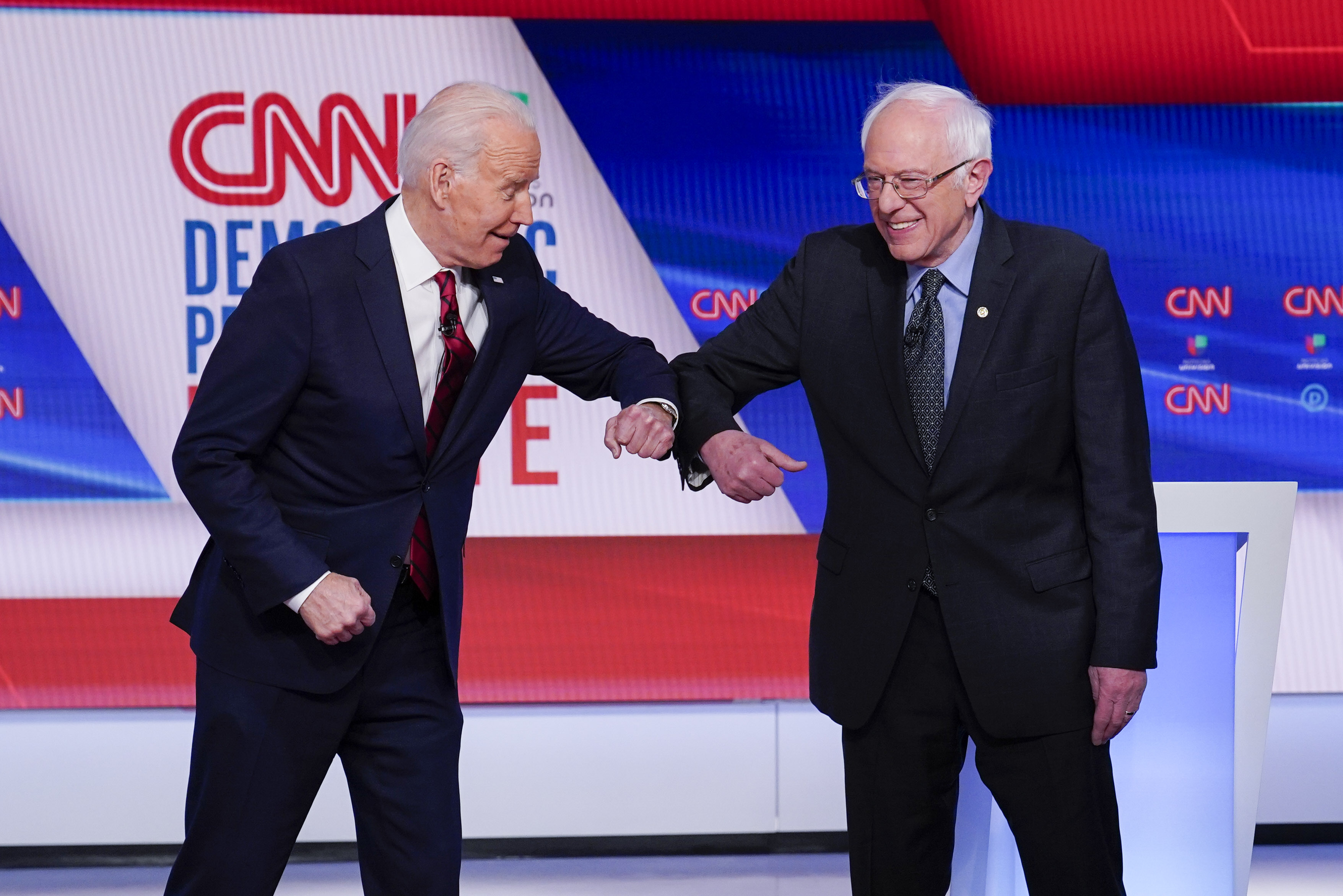 Biden Commits to Woman VP and Other Top Debate Moments

Several times, Biden tried to show that Sanders supporters have a home in the party even if the former vice president wins the nomination, saying, "I agree with Bernie." But Biden got ticked off at Sanders' provocations.

"He's making it hard for me right now. I was trying to give him credit for things," Biden said at one point.

Both septuagenarians said they feel fine and are taking precautions against coronavirus. But Biden coughed several times; Sanders wiped his nose.

That was "not at all helpful tonight in terms of the optics," said Mitchell S. McKinney, director of the Political Communication Institute at the University of Missouri. "This only reminds us that both candidates are in the ‘high risk’ category for COVID-19 based on their age."

Sen. Bernie Sanders speaks on Donald Trump's mistakes handling the coronavirus pandemic and how his grandkids influence his politics.

In the end, Sanders said he would get behind Biden if that's the way the race turns out.

"If I lose this thing, Joe wins, Joe, I will be there for you," Sanders said.