“He was just there for our country. He just was doing his job and he got caught up. It’s very sad," the mother of late U.S. Capitol Police Officer Brian Sicknick said

Brian Sicknick's family wants to uncover every detail about the Jan. 6 insurrection by pro-Trump rioters, when the Capitol Police officer collapsed and later died. They can't understand why lawmakers do not.

Sicknick was one of the on-duty officers badly outnumbered by the mob that stormed the building, smashing windows and breaking through barriers. He was sprayed with a chemical, collapsed and later had a stroke and died. Two other officers took their own lives in the days afterward, and dozens more were hurt— including one officer who had a heart attack and others who suffered traumatic brain injuries and permanent disabilities. Some may never return to the job.

“He was just there for our country,” his mother Gladys said. “He just was doing his job and he got caught up. It’s very sad."

She and his partner Sandra Garza made an extraordinary push Thursday with Republican lawmakers who are likely to vote down the creation of an independent commission to investigate the deadly siege by President Donald Trump’s supporters, meeting with several senators though the effort is likely doomed.

News4's Shawn Yancy reports on the tribute to Officer Brian Sicknick, who died defending the Capitol during the Jan. 6 riot.

The Capitol Police are caught in the middle of a political firestorm involving the lawmakers they are sworn to protect. Congressional leaders are fighting over security, money, leadership and staffing at the police force following the failure of the Capitol Police and other law enforcement agencies to prepare for and hold back the massive mob in the most violent domestic attack on Congress in history.

The House last week narrowly approved $1.9 billion to bolster security at the Capitol, with Democrats pushing past Republican opposition to harden the complex with retractable fencing and a quick-response force. And the House approved the commission to investigate the deadly siege.

But Senate Republicans on Thursday were ready to deploy the filibuster to block the commission, shattering chances for a bipartisan probe of the deadly assault. Most Republicans oppose the bill that would establish a commission to investigate the attack by Trump supporters in a failed attempt to overturn Democrat Joe Biden’s election, part of a growing trend in the GOP to diminish the violence and horror of the day.

Garza and Gladys Sicknick were joined at the Capitol on Thursday by a Capitol police officer and a Metropolitan police officer, both of whom have spoken out publicly about the day, and former Republican Rep. Barbara Comstock of Virginia. They made the rounds to Utah Sen. Mitt Romney and Maine Sen. Susan Collins, who are supportive of the commission, and Wisconsin Sen. Ron Johnson and others who were not.

US Capitol Riot May 28 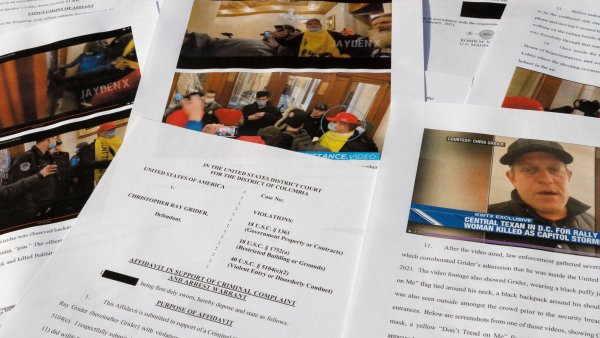 The Mob Made Me Do It: Rioters Claim Jan. 6 Crowd at Fault

“I am fighting so hard for the creation of this commission so we can better understand the attack on our democracy and the heroic actions that were taken that day to save our lives,” Collins told reporters after their meeting.

There have been several oversight hearings, largely focusing on law enforcement failures. The top watchdog for the department testified recently that the police force needed a “cultural change," pointing to inadequate training and outdated weaponry as among several urgent problems facing the force. A nationwide search is underway for a permanent police chief. The department’s acting chief, Yogananda Pittman, was in charge of intelligence when the riot occurred and has faced a vote of no confidence from her own officers.

For Sicknick's girlfriend, Garza, it's been an excruciating time. “It's very obvious that this was not a peaceful day,” she said. “Police officers were being attacked."

Garza also spoke of how some celebrated the medical examiner's ruling in her boyfriend's death that found he suffered a stroke and died from natural causes. Two men have been charged with assaulting Sicknick and another officer, and the U.S. Capitol Police said that the agency accepted the medical examiner’s findings but that the ruling didn’t change the fact that Sicknick had died in the line of duty.

Unlike a traditional municipal law enforcement agency that polices the community at large, Capitol Police officers are solely responsible for protecting Congress and the hallowed building, which makes the infighting in Congress about their future even more strained.

It’s also prompted a handful of officers to speak out publicly and directly lobby lawmakers, highly unusual moves that have involved going around their leadership. One officer has spoken out on television. Others have quietly talked to the media.

Last week, a letter released by a House Democrat was signed by “proud members of the United States Capitol Police” and lashed out at some lawmakers downplaying or lying about the dangers they faced during the insurrection. About 50 people signed onto the letter before it was released, a fraction of the department’s 2,000 officers.

The missive, on Capitol Police letterhead, was delivered to the office of Rep. Jamie Raskin, a Maryland Democrat, and was circulated to top staffers in the House by his office. Raskin said in an interview last week that the officers approached his office, and that they and their families have been traumatized about what happened on the 6th. Raskin said “they can’t believe there is dissension in the Congress” about the simple facts of the insurrection.

“It is inconceivable that some of the Members we protect would downplay the events of January 6th,” the letter reads. “It is a privileged assumption for Members to have the point of view that ‘it wasn’t that bad.’ That privilege exists because the brave men and women of the USCP protected you, the Members.”

The letter was quickly disavowed by Capitol Police leaders, who said the agency doesn’t take any position on legislative matters. They said in a statement that the letter was not an official statement from the department and that it had “no way of confirming it was even authored by USCP personnel.”

Federal prosecutors have charged more than 400 people in the wake of the riot, the largest undertaking in the Justice Department’s history. Trump was impeached again for his role in the insurrection but was acquitted of inciting the mob to violence.