In 2022 State of the Union, Biden Vows to Halt Russia, Hit Inflation

Addressing a concerned nation and anxious world, President Joe Biden vowed in his first State of the Union address Tuesday night to check Russian aggression in Ukraine, tame soaring U.S. inflation and deal with the fading but still dangerous coronavirus.

Biden declared that he and all members of Congress, whatever their political differences, are joined “with an unwavering resolve that freedom will always triumph over tyranny.” He asked lawmakers crowding the House chamber to stand and salute the Ukrainians as he began his speech. They stood and cheered.

It was a notable show of unity after a long year of bitter acrimony between Biden’s Democratic coalition and the Republican opposition.

Biden’s 62-minute speech, which was split between attention to war abroad and worries at home — reflected the same balancing act he now faces in his presidency. He must marshal allied resolve against Russia’s aggression while tending to inflation, COVID-19 fatigue and sagging approval ratings heading into the midterm elections.

Aiming to build on momentum from the speech, Biden will head to Wisconsin on Wednesday in an effort to show Americans that his domestic agenda is working. His vice president and Cabinet members will fan out around the country to amplify the message.

Biden heads again to an old bridge set to be repaired — increasingly a symbol for his administration, tangible evidence of the nation that he’s working to update. This time, it’s a wrought-iron bridge that connects Duluth, Minnesota, and Superior, Wisconsin, across the St. Louis Bay.

The bridge will be replaced using funds from the massive infrastructure plan signed into law last year, a signature piece of bipartisan legislation and proof — Biden says — that the GOP and Democrats can still work together.

In Tuesday’s speech, Biden highlighted the bravery of Ukrainian defenders and a newly reinvigorated Western alliance that has worked to rearm the Ukrainian military and cripple Russia’s economy through sanctions. He acknowledged costs to the American economy, as well, but warned ominously that without consequences, Russian President Vladimir Putin’s aggression wouldn’t be contained to Ukraine.

“Throughout our history we’ve learned this lesson – when dictators do not pay a price for their aggression, they cause more chaos,” Biden said. “They keep moving. And, the costs and threats to America and the world keep rising.”

More State of the Union 2022 Coverage State of the Union 2022: Biden Rallies Support for Ukraine and His Domestic Agenda 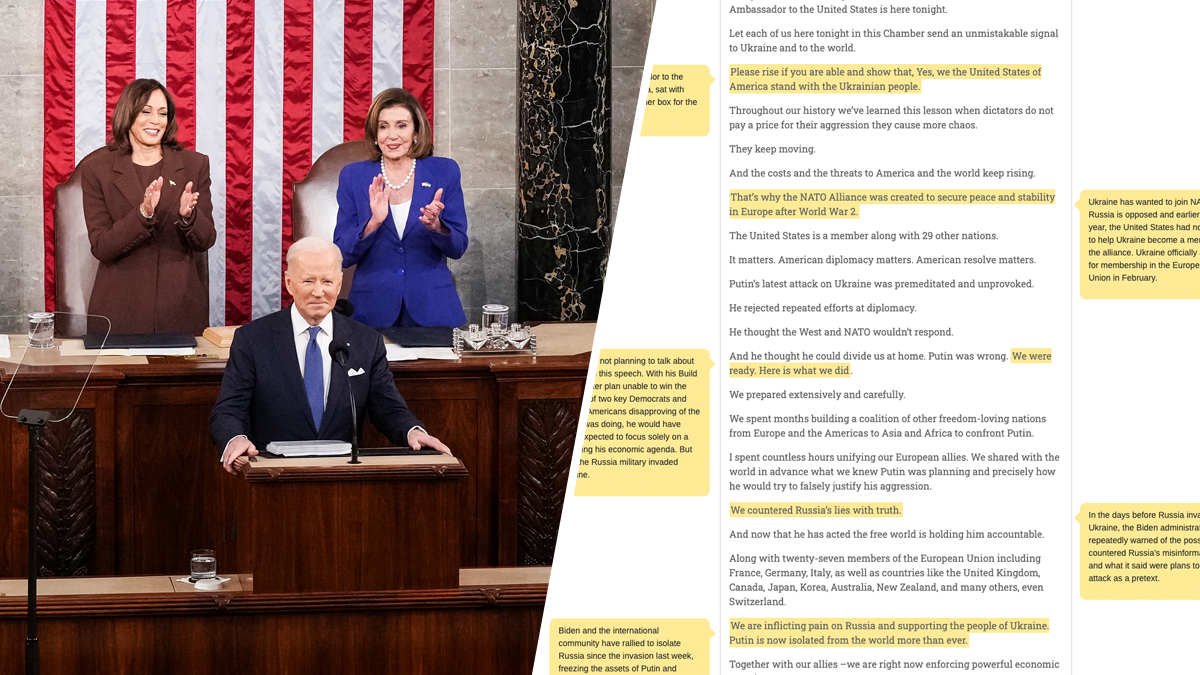 Biden announced that the U.S. is following Canada and the European Union in banning Russian planes from its airspace in retaliation for the invasion of Ukraine. He also said the Justice Department was launching a task force to go after Russian oligarchs, whom he called “corrupt leaders who have bilked billions of dollars off this violent regime.”

“We are coming for your ill-begotten gains,” he said, pledging that the U.S. and European allies were after their yachts, luxury apartments and private jets.

In his State of the Union address, President Joe Biden said the decision to close U.S. airspace to Russian aircraft was aimed at further isolating Russia and damaging its economy.

Biden pivoted in his speech from the troubles abroad to those at home. Even before the Russian invasion sent energy costs skyrocketing, prices for American families had been rising, and the COVID-19 pandemic continues to hurt families and the country’s economy.

Biden outlined plans to address inflation by reinvesting in American manufacturing capacity, speeding supply chains and reducing the burden of childcare and eldercare on workers.

“Too many families are struggling to keep up with the bills,” Biden said. “Inflation is robbing them of the gains they might otherwise feel. I get it. That’s why my top priority is getting prices under control.”

In one sign of national progress on the pandemic, Biden entered the House chamber without a mask, as coronavirus cases decline and new federal guidance tries to nudge the public back to pre-pandemic activities. But there was evidence of ongoing tension as well: The Capitol was newly fenced due to security concerns after last year’s insurrection.

“We have to stay on guard,” President Joe Biden said while taking about coronavirus during his State of the Union address.

Set against disquiet at home and danger abroad, the White House had conceived Tuesday night's speech as an opportunity to highlight the improving coronavirus outlook, rebrand Biden's domestic policy priorities and show a path to lower costs for families grappling with soaring inflation. But events took a turn toward world affairs with last week's Russian invasion of Ukraine and nuclear saber-rattling by Putin.

As is customary, one Cabinet secretary, in this case Commerce Secretary Gina Raimondo, was kept in a secure location during the address, ready to take over the government in the event of a catastrophe.

The State of the Union is typically an address targeted to a national audience, but this year's had the world watching. In an interview with CNN and Reuters, Ukrainian President Volodymyr Zelenskyy urged Biden to deliver a strong and “useful” message about Russia’s invasion. In a show of unity, Ukrainian Ambassador to the U.S. Oksana Markarova joined first lady Jill Biden in the House gallery for the speech.

In a rare discordant moment, Rep. Lauren Boebert of Colorado yelled out that Biden was to blame for the 13 service members who were killed during last August’s chaotic U.S. withdrawal from Afghanistan.

“You put them in. Thirteen of them,” Boebert yelled as Biden mentioned his late son Beau, a veteran who died from brain cancer and served near toxic military burn pits, used extensively in Iraq and Afghanistan. Biden is pursuing legislation to help veterans suffering exposure and other injuries.

After criticizing former President Donald Trump’s COVID-19 relief plan, arguing "it benefitted the top 1% of America,” President Joe Biden received “boos” from some members of the State of the Union audience.

While the crisis in Eastern Europe may have helped to cool partisan tensions in Washington, it didn't erase the political and cultural discord that is casting doubt on Biden’s ability to deliver.

A February AP-NORC poll found that more people disapproved than approved of how Biden is handling his job, 55% to 44%. That's down from a 60% favorable rating last July.

Biden used his remarks to highlight the progress from a year ago — with the majority of the U.S. population now vaccinated and millions more people at work — but also acknowledged that the job is not yet done, a recognition of American discontent.

Iowa Gov. Kim Reynolds, selected to give the Republican response, said Biden’s address came as a blast from the past with rising inflation, rising crime and a resurgent Russia making it feel more like the 1980s than today.

“Even before taking the oath of office, the president said that he wanted to - quote - make America respected around the world again, and to unite us here. He’s failed on both fronts,” she said.

Biden used his speech to nudge the country back "to more normal routines” after the coronavirus reshaped American life.

“It’s time for Americans to get back to work and fill our great downtowns again,” he declared. He said people will be able to order another round of free tests from the government and that his administration was launching a “test to treat” initiative to provide free antiviral pills at pharmacies to those who test positive for the virus.

Where his speech to Congress last year saw the rollout of a massive social spending package, Biden this year largely repackaged past proposals in search of achievable measures he hopes can win bipartisan support in a bitterly divided Congress before the elections.

The president also highlighted investments in everything from internet broadband access to bridge construction from November’s $1.2 trillion bipartisan infrastructure law as an example of government reaching consensus and delivering change for the nation.

As part of his pitch to voters, he also put a new emphasis on how proposals like extending the child tax credit and bringing down child care costs could bring relief to families as prices rise. He was said his climate change proposals would cut costs for lower- and middle-income families and create new jobs.

“Inflation is robbing [Americans] of gains they thought otherwise they would be able to feel,” President Joe Biden said during his State of the Union address Tuesday. “Instead of relying on foreign supply chains, let’s make it in America.”

Biden also appealed for action on voting rights, which has failed to win GOP support. And as gun violence rises, he returned to calls to ban assault weapons, a blunt request he hadn’t made in months. He called to “fund the police with the resources and training they need to protect our communities.”

He led Congress in a bipartisan tribute to retiring Supreme Court Justice Stephen Breyer and highlighted the biography of federal judge Ketanji Brown Jackson, his nominee be the first Black woman on the high court.

Click here for complete coverage of the 2022 State of the Union address.

President Joe Biden received a standing ovation from both sides of the aisle while addressing police funding during the State of the Union address. “The answer is not to defund the police. It’s to fund the police,” Biden said. “Fund them with the resources and training they need to protect our communities.”