The Biden administration is considering lifting sanctions on Iran's supreme leader as part of negotiations aimed at reviving the 2015 nuclear deal, a former U.S. official and two people familiar with the matter told NBC News.

U.S. and Iranian negotiators have discussed the possible move in indirect talks in Vienna, as part of a wider set of compromises that would see the United States return to the 2015 pact and Iran once again abide by restrictions on its nuclear program, the sources said.

"I think that's definitely an Iranian demand," said Vali Nasr, professor of International Affairs and Middle East Studies at the Johns Hopkins University School of Advanced International Studies who worked as a diplomat in the Obama administration. "And I think the U.S. is open to it."

In June 2019, after a U.S. drone was shot down by Iranian forces, former President Donald Trump imposed sanctions on the supreme leader, Ayatollah Ali Khamenei, and officials appointed by him, banning the ayatollah from travel to the United States or any financial transactions with U.S. companies. The sanctions are almost entirely symbolic, as the supreme leader does not travel abroad and he and his inner circle have no assets in the United States, experts and former U.S. officials say.

Build Back Better 20 hours ago 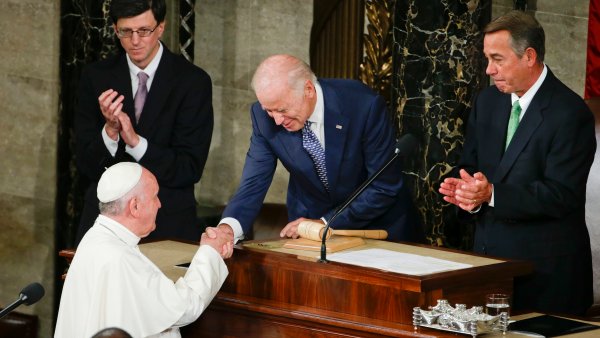 Biden to Meet Pope Francis Amid Some Rifts With US Bishops

Although the sanctions have had no material effect on Iran's economy or its nuclear program, officials in Tehran view the measures against the country's most powerful figure as unjustified and as an affront to Iran, two people familiar with the matter said.