By Jason Dearen, Juliet Linderman and Oleksandr Stashevskyi • Published May 17, 2022

As she lay buried under the rubble, her legs broken and eyes blinded by blood and thick clouds of dust, all Inna Levchenko could hear was screams. It was 12:15 p.m. on March 3, and moments earlier a blast had pulverized the school where she’d taught for 30 years.

Amid relentless bombing, she’d opened School 21 in Chernihiv as a shelter for frightened families. They painted the word “children” in big, bold letters on the windows, hoping that Russian forces would see it and spare them. The bombs fell anyway.

Though she didn’t know it yet, 70 children she’d ordered to shelter in the basement would survive the blast. But at least nine people, including one of her students — a 13-year-old boy — would not.

“Why schools? I cannot comprehend their motivation,” she said. “It is painful to realize how many friends of mine died … and how many children who remained alone without parents, got traumatized. They will remember it all their life and will pass their stories to the next generation.”

This story is part of an ongoing investigation from The Associated Press and the PBS series “Frontline” that includes the War Crimes Watch Ukraine interactive experience and an upcoming documentary.

The Ukrainian government says Russia has shelled more than 1,000 schools, destroying 95. On May 8, a bomb flattened a school in Zaporizhzhia which, like School No. 21 in Chernihiv, was being used as a shelter. As many as 60 people were feared dead.

Intentionally attacking schools and other civilian infrastructure is a war crime. Experts say wide-scale wreckage can be used as evidence of Russian intent, and to refute claims that schools were simply collateral damage.

But the destruction of hundreds of schools is about more than toppling buildings and maiming bodies, according to experts, to teachers and to others who have survived conflicts in the former Yugoslavia, in Syria and beyond. It hinders a nation’s ability to rebound after the fighting stops, injuring entire generations and dashing a country’s hope for the future.

In the nearly three months since Russia invaded Ukraine, The Associated Press and the PBS series “Frontline” have independently verified 57 schools that were destroyed or damaged in a manner that indicates a possible war crime. The accounting likely represents just a fraction of potential war crimes committed during the conflict and the list is updated daily.

In Chernihiv alone, the city council said only seven of the city’s 35 schools were unscathed. Three were reduced to rubble.

The International Criminal Court, prosecutors from across the globe and Ukraine’s prosecutor general are investigating more than 8,000 reports of potential war crimes in Ukraine involving 500 suspects. Many are accused of aiming deliberately at civilian structures like hospitals, shelters and residential neighborhoods.

Targeting schools — spaces designed as havens for children to grow, learn and make friends — is particularly harmful, transforming the architecture of childhood into something violent and dangerous: a place that inspires fear.

A geography teacher, Elena Kudrik, lay dead on the floor of School 50 in the eastern Ukrainian town of Gorlovka. Amid the wreckage surrounding her were books and papers, smeared in blood. In the corner, another lifeless body — Elena Ivanova, the assistant headmaster— slumped over in an office chair, a gaping wound torn into her side.

“It’s a tragedy for us ... It’s a tragedy for the children,” said school director Sergey But, standing outside the brick building shortly after the attack. Shards of broken glass and rubble were sprayed across the concrete, where smiling children once flew kites and posed for photos with friends. 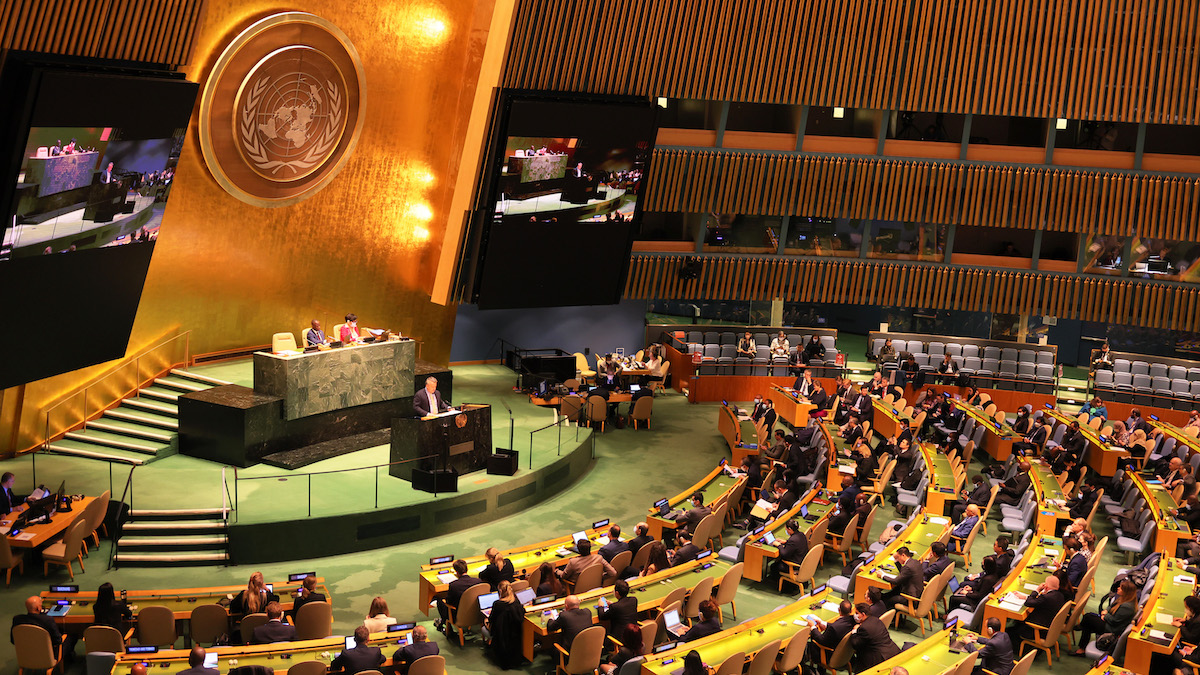 A few kilometers away, at the Sonechko pre-school in the city of Okhtyrka, a cluster bomb destroyed a kindergarten, killing a child. Outside the entrance, two more bodies lay in pools of blood.

Valentina Grusha teaches in Kyiv province, where she has worked for 35 years, most recently as a district administrator and foreign literature instructor. Russian troops invaded her village of Ivankiv just as school officials had begun preparations for war. On Feb. 24, Russian forces driving toward Kyiv fatally shot a child and his father there, she said.

“There was no more schooling,” she said. “We called all the leaders and stopped instruction because the war started. And then there were 36 days of occupation.”

They also shelled and destroyed schools in many nearby villages, she said. Kindergarten buildings were shattered by shrapnel and machine-gun fire.

Despite the widespread damage and destruction to educational infrastructure, war crimes experts say proving an attacking military’s intent to target individual schools is difficult. Russian officials deny targeting civilian structures, and local media reports in Russian-held Gorlovka alleged Ukrainian forces trying to recapture the area were to blame for the blast that killed the two teachers there.

But the effects of the destruction are indisputable.

“When I start talking to the directors of destroyed and robbed institutions, they are very worried, crying, telling with pain and regret,” Grusha said. “It’s part of their lives. And now the school is a ruin that stands in the center of the village and reminds of those terrible air raids and bombings.”

UNICEF communications director Toby Fricker, who is currently in Ukraine, agreed. “School is often the heart of the community in many places, and that is so central to everyday life.”

Teachers and students who have lived through other conflicts say the destruction of schools in their countries damaged an entire generation.

Syrian teacher Abdulkafi Alhambdo still thinks about the children’s drawings soaked in blood, littered across the floor of a schoolhouse in Aleppo. It had been attacked during the Civil War there in 2014. The teachers and children had been preparing for an art exhibit featuring student work depicting life during wartime.

The blast killed 19 people, including at least 10 children, the AP reported at the time. But it’s the survivors who linger in Alhambdo’s memory.

“I understood in (their) eyes that they wouldn’t go to school anymore,” he said. “It doesn’t only affect the kids who were running away, with shock and trauma. It affects all kids who heard about the massacre. How can they go back to school? You are not only targeting a school, you’re targeting a generation.”

Jasminko Halilovic was only 6 years old when Sarajevo, in present-day Bosnia-Herzegovina, was besieged. Now, 30 years after the Bosnian war ended, he and his peers are the ones still picking up the pieces.

Halilovic went to school in a cellar, as many Ukrainian children have done. Desperately chasing safety, the teachers and students moved from basement to basement, leaning chalkboards on chairs instead of hanging them on walls.

Halilovic, now 34, founded the War Childhood Museum, which catalogs the stories and objects of children in conflict around the world. He was working in Ukraine with children displaced by Russia’s 2014 invasion of the Donbas region when the current war began. He had to evacuate his staff and leave the country.

Alhambdo said he saw firsthand how the trauma of war influenced the development of children growing up in Aleppo. Instilling fear, anger and a sense of hopelessness is part of the enemy's strategy, he said. Some became withdrawn, he said, and others violent.

“When they see their school destroyed, do you know how many dreams have been destroyed? Do you think anybody would believe in peace and love and beauty when the place that taught them about these things has been destroyed?” he said.

Alhambdo stayed in Aleppo and taught children in basements, apartments, anywhere he could, for nearly 10 years. Continuing to teach in spite of war, he said, is an act of defiance.

“I’m not fighting on the front lines,” he said. “I’m fighting with my kids.”

After the attack on School 50 in Gorlovka, shattered glass from blown-out windows littered the classrooms and hallways and the street outside. The floors were covered in dust and debris: cracked ceiling beams, slabs of drywall, a television that crashed down from the wall. A cellphone sat on the desk next to where one of the teachers was killed.

In Ukraine, some schools still standing have become makeshift shelters for people whose homes were destroyed by shelling and mortar fire.

What often complicates war crimes prosecutions for attacks on civilian buildings is that large facilities like schools are sometimes repurposed for military use during war. If a civilian building is being used militarily, it is a legitimate wartime target, said David Bosco, a professor of international relations at Indiana University whose research focuses on war crimes and the International Criminal Court.

The key for prosecutors, then, will be to show that there was a pattern by the Russians of targeting schools and other civilian buildings nationwide as a concerted military strategy, Bosco said.

“The more you can show a pattern, then the stronger the case becomes that this was really a policy of not discriminating between military and civilian facilities,” Bosco said. “(Schools are) a place where children are supposed to feel safe, a second home. Obviously shattering that and in essence attacking the next generation. That’s very real. It has a huge impact.”

As the war grinds on, more than half of Ukraine’s children have been displaced.

In Kharkiv, which has undergone relentless shelling, children's drawings are taped to the walls of an underground subway station that has become not only a family shelter but also a makeshift school. Primary school-age children gather around a table for history and art lessons.

“It helps to support them mentally," said teacher Valeriy Leiko. In part thanks to the lessons, he said, “They feel that someone loves them.”

Millions of kids are continuing to go to school online. The international aid group Save the Children said it is working with the government to establish remote learning programs for students at 50 schools. UNICEF is also trying to help with online instruction.

“Educating every child is essential to preventing grave violations of their rights,” the group said in a statement to the AP.

On April 2, Grusha’s community outside Kyiv began a slow reemergence. They are still raking and sweeping debris from schools and kindergartens that were damaged but not destroyed, she said, and taking stock of what’s left. They started distance learning classes and planned to relocate children whose schools were destroyed to others close by.

Even with war still raging, there is a return to normal life including schooling, she said.

But Levchenko, who was in Kyiv in early May to undergo surgery for her injuries, said the emotional damage done to so many children who have experienced and witnessed such immense suffering may never be fully repaired.

“It will take so much time for people and kids to recover from what they have lived,” she said. The kids, she said, are “staying underground without sun, shivering from siren sounds and anxiety.”

“It has a tremendously negative impact. Kids will remember this all their life.”

Stashevskyi reported from Kyiv, Dearen from New York and Linderman from Washington. Associated Press reporters Erika Kinetz in Chernihiv and Michael Biesecker in Washington contributed to this report.