For the fourth straight day, scores of truckers blocked the Ambassador Bridge connecting Windsor, Ontario, to Detroit, disrupting the flow of auto parts and other products

The Biden administration urged Prime Minister Justin Trudeau's government Thursday to use its federal powers to end the truck blockade by Canadians protesting the country’s COVID-19 restrictions, as the bumper-to-bumper demonstration forced auto plants on both sides of the border to shut down or scale back production.

For the fourth straight day, scores of truckers taking part in what they dubbed the Freedom Convoy blocked the Ambassador Bridge connecting Windsor, Ontario, to Detroit, disrupting the flow of auto parts and other products between the two countries. 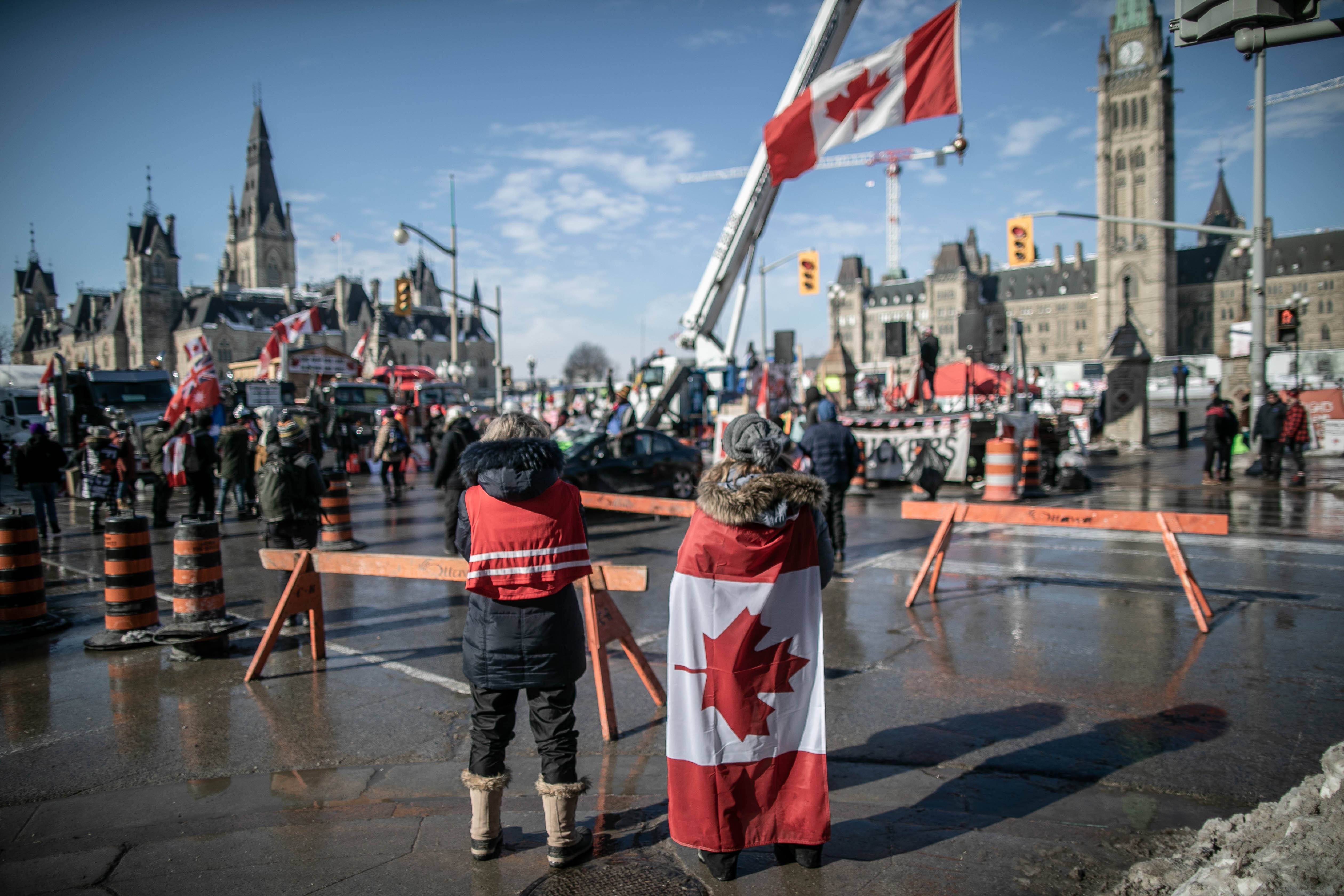 Trudeau met virtually with leaders of Canada's opposition late Thursday and said he spoke with Windsor's mayor. Trudeau's office said there is a willingness to “respond with whatever it takes” to end the blockades.

Conservative Ontario Premier Doug Ford, meanwhile, moved to cut off funding for the protests by successfully asking a court to freeze millions of dollars in donations to the convoy through crowd-funding site GiveSendGo. Ford has called the protests an occupation.

Canadian officials previously got GoFundMe to cut off funding after protest organizers used the site to raise about 10 million Canadian dollars ($7.8 million). GoFundMe determined that the fundraising effort violated the site’s terms of service due to unlawful activity.

With political and economic pressure mounting, Windsor Mayor Drew Dilkens announced the city will seek a court injunction to end the occupation.

“The economic harm is not sustainable and it must come to an end,” he said.

In the U.S., authorities braced for the possibility of similar truck-borne protests inspired by the Canadians, and authorities in Paris and Belgium banned road blockades to head off disruptions there, too.

The U.S. Department of Homeland Security said in a bulletin to local and state law enforcement agencies that it has received reports that truckers are planning to “potentially block roads in major metropolitan cities” in a protest against vaccine mandates and other issues.

The agency said the convoy could begin in Southern California as early as this weekend, possibly disrupting traffic around the Super Bowl, and reach Washington in March in time for the State of the Union address, according to a copy of Tuesday’s bulletin obtained by The Associated Press.

The White House said the department is “surging additional staff” to the Super Bowl just in case.

The ban on road blockades in Europe and the threat of prison and heavy fines were likewise prompted by online chatter from groups calling on drivers to converge on Paris and Brussels over the next few days.

The Ambassador Bridge is the busiest U.S.-Canadian border crossing, carrying 25% of all trade between the two countries, and the effects of the blockade there were felt rapidly.

Ford said its Windsor engine plant reopened Thursday after being shut down on Wednesday because of a lack of parts. But the factory and the company’s assembly plant in Oakville, Ontario, near Toronto, were operating at reduced capacity, the automaker said.

On the U.S. side, GM sent the first shift home two hours early Thursday at its Flint, Michigan, heavy-duty pickup truck plant due to parts shortages.

Stellantis cut short the first shift Friday at its Jeep plant in Toledo, Ohio, due to parts shortages.

Also, Honda will temporarily stop production on one assembly line during the day shift Friday at its plant in Alliston, Ontario. It’s because of border delays. U.S. plants are scheduled to run normally Friday.

Toyota said three of its plants in Ontario closed for the rest of the week because of parts shortages, and production also had to be curtailed in Georgetown, Kentucky.

Hundreds of demonstrators in trucks have also paralyzed the streets of downtown Ottawa for almost two weeks now, and have now closed three border crossings: at Windsor; at Coutts, Alberta, opposite Montana; and at Emerson, Manitoba, across from North Dakota.

The protesters are decrying vaccine mandates for truckers and other COVID-19 restrictions and are railing against Trudeau, even though many of Canada's precautions, such as mask rules and vaccine passports for getting into restaurants, theaters and other places, were enacted by provincial authorities, not the federal government, and are already rapidly being lifted as the omicron surge levels off.

Trudeau continued to stand firm against lifting vaccine mandates, including a requirement that all truck drivers entering the country be fully vaccinated. But because an estimated 90% of the nation’s truckers are already inoculated, some conservatives have called on the prime minister to drop the mandate.

The convoy has been promoted and cheered on by many Fox News personalities and attracted support from the likes of former President Donald Trump and Texas Sen. Ted Cruz.

The Associated Press identified more than a dozen Facebook groups encompassing roughly a half-million members that are being used to drum up support for the Canadian protests or plan similar ones in the U.S. and Europe.

To get around the blockade and into Canada, truckers in the Detroit area have had to drive 70 miles north to Port Huron, Michigan, and cross the Blue Water Bridge, where there was a two-hour delay leaving the U.S.

The blockade is happening at a bad time for the U.S. auto industry. Supplies of new vehicles already are low across the nation because of the global shortage of computer chips, which has forced automakers to temporarily close factories.

“The disruptions we are seeing at the U.S.-Canada border — at the Detroit-Windsor Ambassador Bridge and at other crossings — are adding to the significant supply chain strains on manufacturers and other businesses in the United States,” the U.S. Chamber of Commerce, National Association of Manufacturers and Business Roundtable said in a joint statement.

“We respectfully urge the Canadian government to act swiftly to address the disruption to the flow of trade and its impact on manufacturers and other businesses on both sides of the border.”