Videos showed a group of Afghans hanging onto a U.S. military plane just before takeoff and several falling through the air as the jet rapidly gained altitude over the city

Thousands of Afghans rushed into Kabul’s main airport Monday, some so desperate to escape the Taliban that they held onto a military jet as it took off and plunged to their deaths. At least seven people died in the chaos, U.S. officials said, as America’s longest war ended with its enemy the victor.

The crowds came while the Taliban enforced their rule over the capital of 5 million people after a lightning advance across the country that took just over a week to dethrone the country's Western-backed government. There were no major reports of abuses or fighting, but many residents stayed home and remained fearful after the insurgents' takeover saw prisons emptied and armories looted.

A resolute U.S. President Joe Biden said he stood “squarely behind” his decision to withdraw American forces and acknowledged the “gut-wrenching” images unfolding in Kabul. Biden said he faced a choice between honoring a previously negotiated withdrawal agreement or sending thousands more troops back to begin a third decade of war.

“The truth is this did unfold more quickly than we had anticipated,” Biden said Monday. “The developments of the last week reinforce that ending U.S. military involvement in Afghanistan now was the right decision … Here’s what I believe to my core: It is wrong to order American troops to step up when Afghanistan’s own armed forces would not.”

“After 20 years, I’ve learned the hard way that there was never a good time to withdraw U.S. forces,” Biden said in a televised address from the White House.

The president said he would not repeat the mistakes of the past, and he warned the Taliban not to interfere with the evacuation efforts, threatening to use “devastating force, if necessary.”

Across Afghanistan, the International Committee of the Red Cross warned that thousands had been wounded in fighting. Elsewhere, security forces and politicians handed over their provinces and bases without a fight, likely believing the two-decade Western experiment to remake Afghanistan would not survival the resurgent Taliban. The last American troops had planned to withdraw at the end of the month. 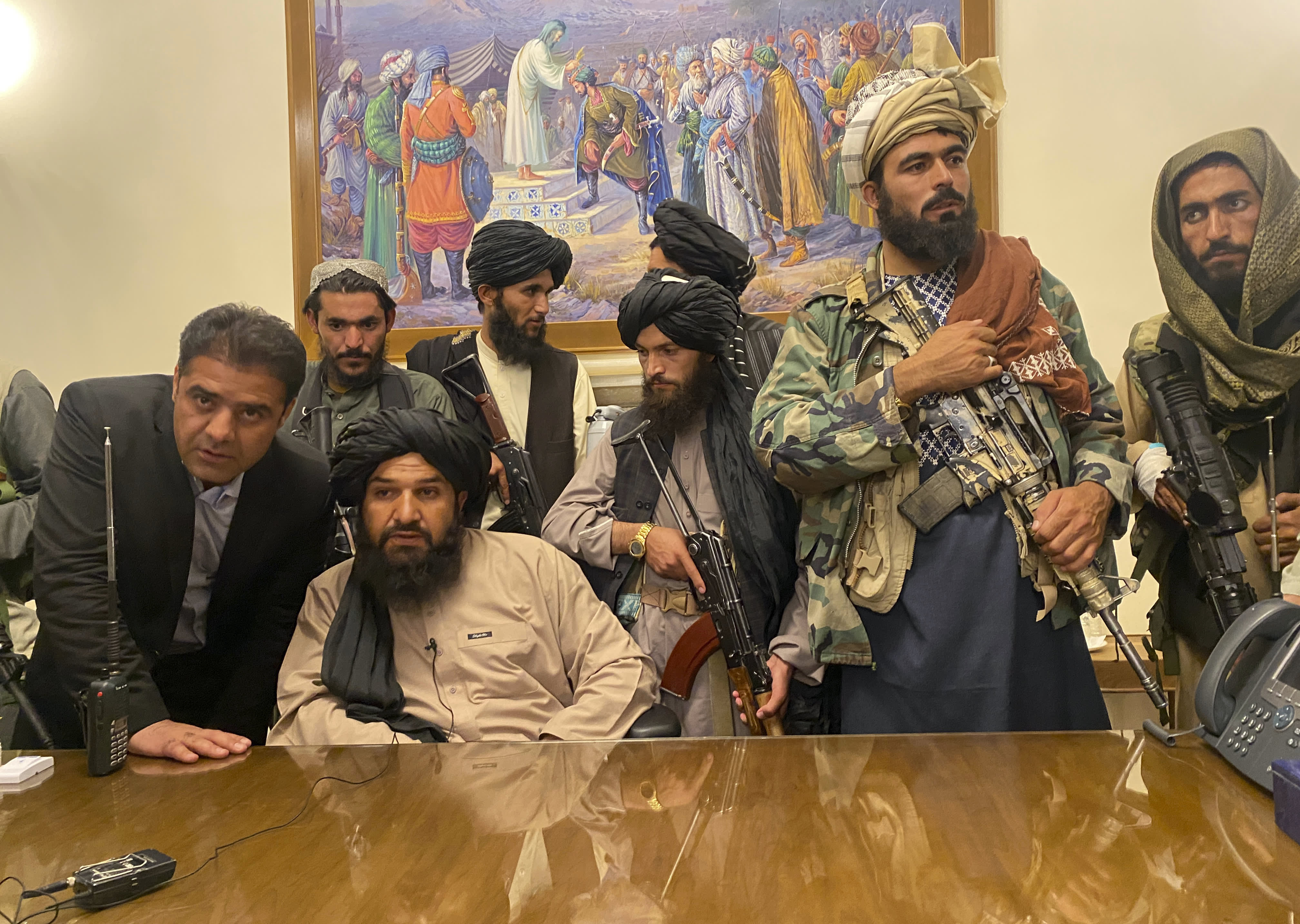 “The world is following events in Afghanistan with a heavy heart and deep disquiet about what lies ahead,” United Nations Secretary-General Antonio Guterres said.

As the U.S. military and others continued evacuation flights, Afghans swarmed over the international airport's tarmac. Some climbed into aircraft parked on the taxiway, while others dangled precariously off a jet bridge.

U.S. troops took positions to guard the active runway, but the crowd stormed past them and their armored vehicles. Gunshots rang out. As one U.S. Air Force Boeing C-17 Globemaster III tried to take off, a helicopter did low runs in front of it to try to drive people off the runway.

Videos showed a group of Afghans hanging onto the plane just before takeoff and several falling through the air as the airplane rapidly gained altitude over the city.

Just weeks before the U.S. is scheduled to end its war in Afghanistan, the Biden administration is rushing 3,000 fresh troops to Kabul.

Senior American military officials, who spoke on condition of anonymity to discuss the ongoing operation, told The Associated Press that the chaos left seven dead, including several who fell from the flight. Pentagon spokesman John Kirby said U.S. forces killed two people he described as carrying weapons in the melee. He said 1,000 more U.S. troops would be deployed to secure the airfield and back up the 2,500 already there.

All flights at the airport — both military and civilian — were halted until Afghan civilians could be cleared from the runway, Kirby added.

Earlier, more than 300 people were evacuated aboard a Turkish Airlines flight after Turkish soldiers cleared the runway. Senol Celik, who identified himself as a Turkish Embassy employee, said people “threw themselves in front of the plane.”

“They wanted to board the plane. They wanted to escape Afghanistan,” he said. “We were afraid that the plane would return and that we would enter that chaos. We were sad for those people.”

Shafi Arifi, who had a ticket to travel to Uzbekistan on Sunday, was unable to board his plane because it was packed with people who raced across the tarmac and climbed aboard, with no police or airport staff in sight.

“There was no room for us to stand," said the 24-year-old. “Children were crying, women were shouting, young and old men were so angry and upset, no one could hear each other. There was no oxygen to breathe.”

After a woman fainted and was carried off the plane, Arifi gave up and returned home.

Other Afghans, like Rakhmatula Kuyash, are also trying to leave through land border crossings, all of which are now controlled by the Taliban.

“I’m lost and I don’t know what to do," said Kuyash, who crossed into Uzbekistan on Sunday after leaving his children and relatives in Afghanistan. “I left everything behind.”

Others were not so lucky. Uzbekistan air defenses shot down an Afghan military aircraft that tried to enter the country without permission. The two pilots were reportedly injured and in custody.

Meanwhile, the head of U.S. Central Command met face-to-face with senior Taliban leaders in Qatar and won their agreement to establish an arrangement under which evacuation operations at the airport can continue without interference, a U.S. defense official said. The official spoke on condition of anonymity to discuss sensitive talks not yet announced publicly.

The U.S. Embassy has been evacuated and the American flag lowered, with diplomats relocating to the airport to help with the evacuation. Other Western countries also closed their missions and were flying out staff and their citizens.

In interviews with U.S. television networks, national security adviser Jake Sullivan blamed the Afghan military for the Taliban's rapid takeover, saying it lacked the will to fight.

The Taliban offensive stunned American officials. Just days before the insurgents entered Kabul with little if any resistance, a U.S. military assessment predicted it could take months for the capital to fall.

The rout threatened to erase 20 years of Western efforts to remake Afghanistan that saw tens of thousands of Afghans killed as well as more than 3,500 U.S. and allied troops. The initial invasion in 2001 drove the Taliban from power and scattered al-Qaida, which had planned the 9/11 attacks while being sheltered in Afghanistan.

Under the Taliban, which ruled in accordance with a harsh interpretation of Islamic law, women were largely confined to their homes and suspected criminals faced amputation or public execution. The insurgents have sought to project greater moderation in recent years, but many Afghans remain skeptical.

On Monday, Nillan, a 27-year-old resident of Kabul who asked to be identified only by her first name for fear of reprisals, said she did not see a single woman out on the streets during a 15-minute drive, “only men and boys.”

“It feels like time has stopped. Everything’s changed,” she told the AP.

She added, "It feels like our life and our future has ended.”