After meetings this week, the service leaders hammered out an agreement that rejected Army and Air Force requests for a two-year wait and reflected broader concerns that a longer delay would trigger criticism on Capitol Hill, officials familiar with the talks told The Associated Press.

The new request for a delay will go to Defense Secretary Jim Mattis for a final decision, said the officials, who weren't authorized to discuss the internal deliberations publicly and spoke on condition of anonymity.

Virus Updates: Clinics for COVID ‘Long-Haulers'; J&J Shots Ship Out Across US 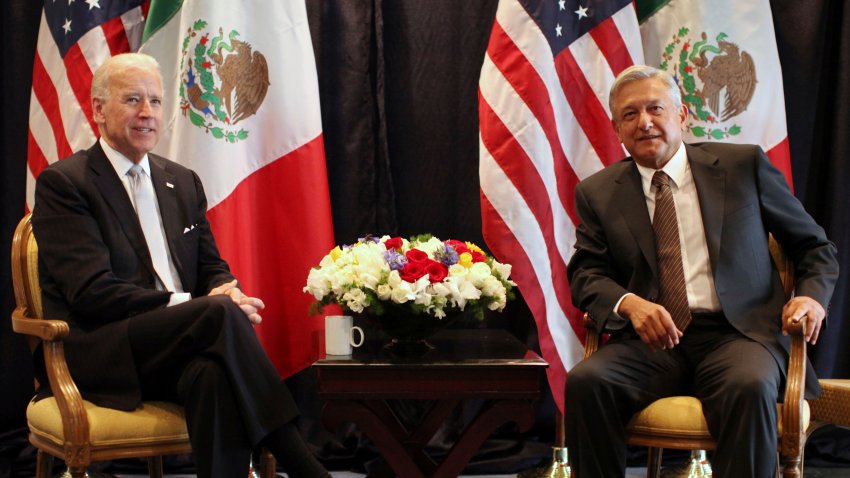 Biden to Meet With Mexican President Amid Migration Issues

Transgender servicemembers have been able to serve openly in the military since last year, when former Defense Secretary Ash Carter ended the ban, declaring it the right thing to do. Since Oct. 1, transgender troops have been able to receive medical care and start formally changing their gender identifications in the Pentagon's personnel system.

But Carter also gave the services until July 1 to develop policies to allow people already identifying as transgender to newly join the military, if they meet physical, medical and other standards, and have been stable in their identified genders for 18 months. The military chiefs had said they needed time to study the issue and its effects on the readiness of the force before taking that step.

Officials said Friday that the chiefs believe the extra half-year would give the four military services time to gauge if currently serving transgender troops are facing problems and what necessary changes the military bases might have to make.

Dana White, the Pentagon's chief spokeswoman, said there have been ongoing discussions with the service chiefs and a recommendation is expected, but she declined to disclose any details.

"It's been a very deliberative process," she said. "The deputy secretary of defense has not submitted a recommendation to the secretary yet and so no decision has been made."

Stephen Peters, spokesman for Human Rights Campaign, said the group is disappointed with the delay request.

"Each day that passes without implementing the final piece of this important policy harms our military readiness and restricts the Armed Forces' ability to recruit the best and the brightest," said Peters, a Marine veteran. "There are thousands of transgender service members openly and proudly serving our nation today, and as they've proven time and time again, what matters is the ability to get the job done — not their gender identity."

Already, there are as many as 250 servicemembers in the process of transitioning to their preferred genders or who have been approved to formally change gender within the Pentagon's personnel system, according to several defense officials.

According to several officials familiar with the matter, three of the four services wanted more time. In recent weeks, Navy officials suggested they would be ready to begin enlistment in July but asked for a one-year delay, largely to accommodate a request from the Marine Corps for more time, officials said. The Navy secretary also oversees the Marine Corps.

The Army and Air Force wanted a two-year delay to further study the issue, said the officials, who were not authorized to talk about the internal discussion publicly and spoke on condition of anonymity.

Officials said there was a broad recognition that allowing transgender individuals to enlist affects each service differently. They described the biggest challenge as the infantry. They said the discussions aimed at a solution that would give recruits the best chance of succeeding, while ensuring the services maintain the best standards for entry into the military.

Service chiefs will also require that transgender recruits be stable in their preferred genders for at least two years, an increase from Carter's earlier plan to allow 18 months, the officials said. The chiefs also want to review the policy in a year to see how things are working, the officials said.

Key concerns are whether currently enlisted troops have had medical or other issues that cause delays or problems with their ability to deploy or meet physical or other standards for their jobs. Military leaders also want to review how transgender troops are treated, if they're discriminated against or have had disciplinary problems, the officials said.

Gen. Joseph Dunford, chairman of the Joint Chiefs of Staff, told a Senate committee last week there have been some issues identified with recruiting transgender individuals that "some of the service chiefs believe need to be resolved before we move forward." He said Mattis is reviewing the matter.

The military services have various ways of counting the number of transgender troops currently serving. The Pentagon has refused to release any data. But officials said there are 42 servicemembers across the Army, including the National Guard and Reserve, who have been approved to change their gender identities in the personnel system. At least 40 more are in the process of transitioning, they said.

Officials said there are about 160 sailors in the Navy who are somewhere in the process of gender transition. That could include counseling, hormone treatment or gender reassignment surgery. And about "a handful" of Marines have come forward to seek medical care involving gender transition, and there are possibly others going through the process with their commanders, officials said.

The Air Force refused to release any numbers, and other officials did not know those details.