Russian President Vladimir Putin has recently signaled he wants a peaceful path out of the crisis but President Joe Biden struck a skeptical tone about Moscow’s intentions.

Ukrainians defied pressure from Moscow with a national show of flag-waving unity Wednesday, while the U.S. warned that Russia had added as many as 7,000 troops near Ukraine’s borders despite Kremlin declarations that forces were being pulled back from the region.

While a feared Russian invasion of Ukraine did not materialize as feared, the United States and its allies maintained that the threat is still strong, with Europe’s security and economic stability in the balance.

Russia has massed more than 150,000 troops east, north and south of Ukraine, according to Western estimates. Russian President Vladimir Putin has signaled that he wants a peaceful path out of the crisis, and U.S. President Joe Biden promised that the U.S. would continue to give diplomacy “every chance,” but he struck a skeptical tone about Moscow’s intentions. Biden also insisted that Washington and its allies would not “sacrifice basic principles” respecting Ukraine sovereignty.

Russian Defense Ministry video showed a trainload of armored vehicles moving across a bridge away from Crimea, the Black Sea peninsula that Russia annexed from Ukraine in 2014. It also announced that more tank units were being loaded on trains to move back to their permanent bases after training exercises. 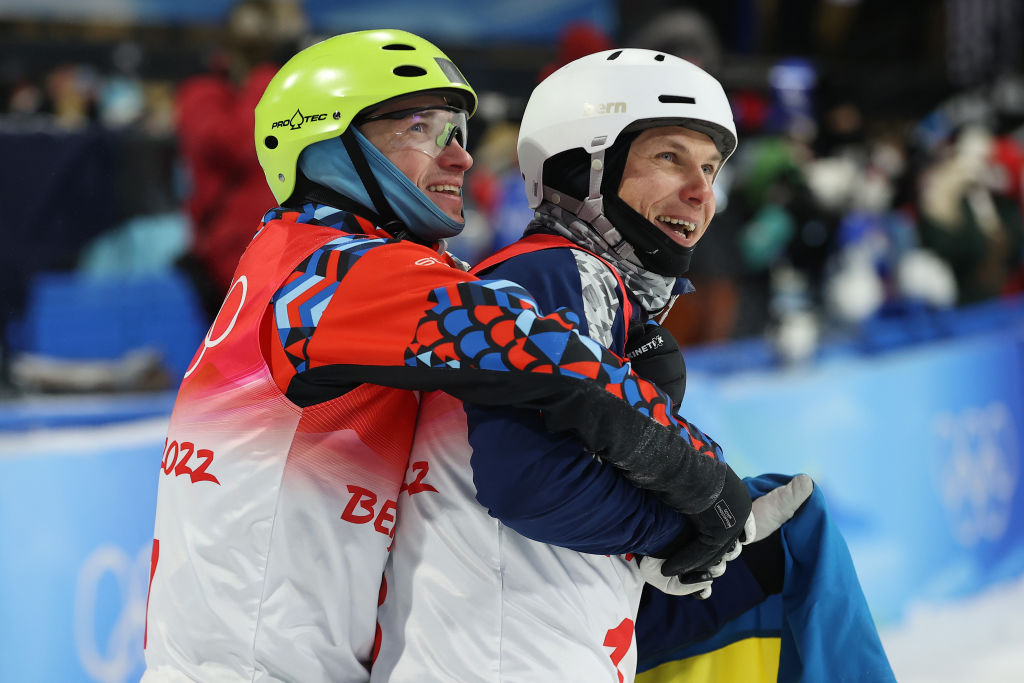 Ukrainian and Russian Hug to Celebrate Medals at Winter Olympics 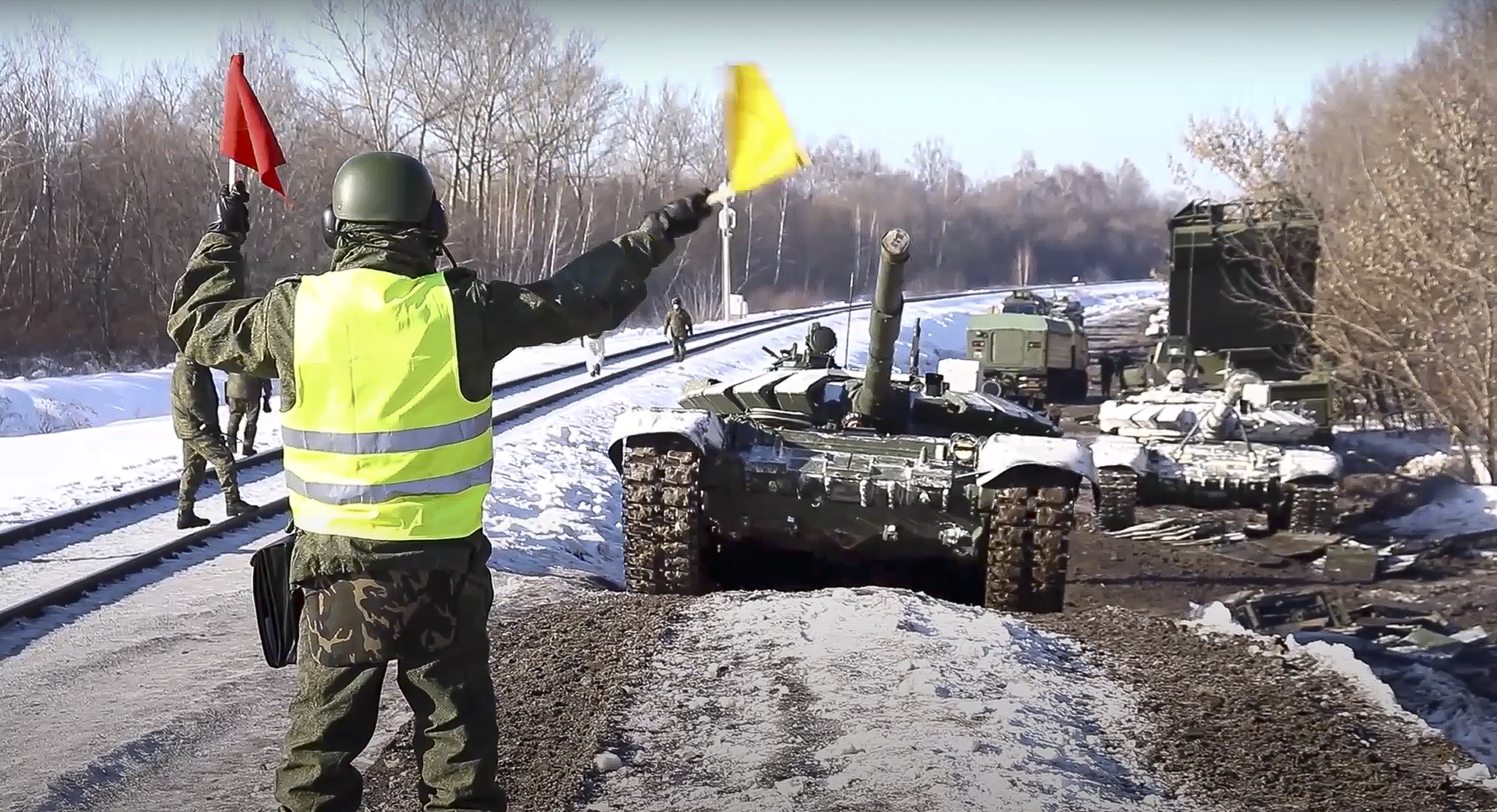 But at the same time, Russia continued war games near Ukraine’s borders and across its vast territory.

A senior U.S. administration official said the West detected that Russia had increased its force near Ukraine by 7,000 troops, with some arriving as recently as Wednesday, and that there had been a marked increase in false claims by Russians that the Kremlin might use as pretext for an invasion.

The official said those claims included reports of unmarked graves of civilians allegedly killed by Ukrainian forces, statements that the U.S. and Ukraine are developing biological or chemical weapons, and claims that the West is funneling in guerrillas to kill Ukrainians.

The official was not authorized to speak publicly about sensitive operations and spoke to The Associated Press on condition of anonymity. The official did not provide underlying evidence for the assertions.

The U.S. and Europe are maintaining threats of harsh sanctions. Trust between East and West remains elusive.

Members of the 101st Airborne Division left Kentucky on Tuesday, bound for Europe.

Asked why Russians would claim to be withdrawing when government intelligence, commercial satellite photos and social media videos showed no evidence of that, Price said: “This is the Russian playbook, to paint a picture publicly … while they do the opposite.”

NATO Secretary-General Jens Stoltenberg said the alliance also had not seen “any withdrawal of Russian forces,” as did multiple European governments. Before chairing a NATO defense ministers meeting in Brussels, he said: “If they really start to withdraw forces, that’s something we will welcome, but that remains to be seen.”

In the meantime, the alliance is examining this week how and when to rapidly dispatch troops and equipment to countries closest to Russia and the Black Sea region should Moscow order an invasion.

“What is this? Rotations, withdrawal, returning back again," he said on a visit to the southeastern city of Mariupol. “It’s too early to rejoice.”

President Joe Biden laid out the U.S. plan for sanctions and support to Ukraine and neighboring countries if Russia decides to invade Ukraine. He also urged Russia to solve the issues through diplomacy.

The Ukrainian leader has repeatedly sought to project calm as well as strength during the crisis, declaring Wednesday a “Day of National Unity.”

“We are united by a desire to happily live in peace,” Zelenskyy said in an address to the nation earlier in the day. “We can defend our home only if we stay united.”

Across the country, Ukrainians of all ages waved flags in the streets and from apartment windows.

Hundreds unfolded a 200-meter (650-foot) flag at Kyiv’s Olympic Stadium, while another was draped in the center of a shopping mall in the capital.

In the government-controlled part of Ukraine's eastern region of Luhansk, where Russian-backed separatists have been fighting Ukrainian troops since 2014, residents stretched another huge flag across a street.

“This event, this number of people united around Ukrainian flag will show that we stand for united Ukraine,” said resident Olena Tkachova.

A 2015 deal brokered by France and Germany helped end the worst of the fighting in eastern Ukraine, but implementation has stalled. The deal, known as the Minsk agreement, would offer broad self-rule to the separatist territories and thus is resented by many in Ukraine.

A Ukrainian government official said in a television interview that Zelenskyy would consider holding a referendum on the Minsk agreement “if there are no other options or instruments.” But Vice Prime Minister Iryna Vereshchuk said she was unaware that such an idea was under serious discussion.

Russia has repeatedly complained that the U.S. and NATO have not responded satisfactorily in writing to its security concerns. Foreign Ministry spokeswoman Maria Zakharova said Wednesday that Russia is in the final phase of preparing its formal response to the West. “After that, a schedule of further steps will be developed,” she said on state television.

It appears to be another indication that Russia is playing a long game, determined to keep up the pressure for awhile.

Russia wants the West to keep Ukraine and other former Soviet nations out of NATO, halt weapons deployments near Russian borders and roll back forces from Eastern Europe. The U.S. and its allies have roundly rejected those demands, but they offered to engage in talks with Russia on ways to bolster security in Europe.

For now, Russia is flexing its muscle. Russian fighter jets flew training missions Wednesday over neighboring Belarus and paratroopers held shooting drills at firing ranges there as part of massive war games that the West feared could be used as cover for an invasion of Ukraine. Belarusian Foreign Minister Vladimir Makei reaffirmed that all Russian troops and weapons will leave the country when the maneuvers end Sunday.

Maxar Technologies, a commercial satellite imagery company that has been monitoring the Russian buildup, reported Wednesday that new photos show heightened Russian military activity near Ukraine, including the construction of a pontoon bridge in Belarus less than 6 kilometers (4 miles) from the Ukrainian border.

Russia has mocked Western warnings about an imminent invasion as “paranoia” and “madness.” Kremlin spokesman Dmitry Peskov pointed sarcastically at warnings of an invasion that could start Wednesday, saying that Russian officials had a good sleep.

Asked by German daily Welt if Russia was going to attack Wednesday, Russia’s ambassador to the European Union Vladimir Chizhov quipped: “Wars in Europe rarely start on a Wednesday.”

“There won’t be an escalation next week either, on in the week after, or in the coming month,” he said.

The White House will lean on Vice President Kamala Harris to help with diplomatic efforts when she travels to Germany to take part in this weekend’s Munich Security Conference, officials said. Harris is scheduled to meet Friday with Stoltenberg and hold a multilateral meeting with the leaders of the Baltic states of Latvia, Lithuania and Estonia. She’s also scheduled to deliver a major address Saturday on the administration’s efforts to stop Russian aggression. After the speech, Harris is slated to meet with Zelenskyy and German Chancellor Olaf Scholz.