In all, Trump took clemency actions related to 11 people

Those who got a break from Trump include financier Michael Milken, the "junk bond king" who served two years in prison in the early 1990s after pleading guilty to violating U.S. securities laws, and Edward DeBartolo Jr., the former San Francisco 49ers owner convicted in a gambling fraud scandal after building one of the most successful NFL teams in history. But Trump also commuted the sentences of several women with more sympathetic cases to balance out the men convicted of corruption.

In all, Trump took clemency actions related to 11 people, his latest interventions in the justice system as he faces growing criticism for weighing in on the cases of former aides. Trump made clear that he saw similarities between efforts to investigate his own conduct and those that took down Blagojevich, a Democrat who appeared on Trump’s reality TV show, "Celebrity Apprentice."

"It was a prosecution by the same people — Comey, Fitzpatrick, the same group," Trump told reporters. He was referring to Patrick Fitzgerald, the former U.S. attorney who prosecuted Blagojevich and now represents former FBI Director James Comey, whom Trump fired from the agency in May 2017. Comey was working in the private sector during the Blagojevich investigation and indictment.

The clemency actions come as an emboldened Trump continues to test the limits of his office now that impeachment is over. The actions drew alarm from Democratic Rep. Bill Pascrell, Jr. of New Jersey, who accused Trump of using his unfettered pardon power "to shield unrepentant felons, racists and corrupt scoundrels."

President Trump is facing rare disapproval from some of his most loyal allies: Attorney General William Barr and Senate Republicans.

Blagojevich was convicted on charges of political corruption, including seeking to sell an appointment to former President Barack Obama's old Senate seat and trying to shake down a children's hospital.

But Trump said the former governor had been subjected to a "ridiculous sentence" that didn't fit his crimes.

"That was a tremendously powerful, ridiculous sentence, in my opinion and in the opinion of many others," he said.

Trump confirmed the pardons on an air base tarmac as he left Washington for a West Coast visit. He said he had yet to think about pardoning his longtime confidant Roger Stone, who is scheduled to be sentenced Thursday, or granting clemency to several former aides who have ended up in legal jeopardy, including his former campaign chairman Paul Manafort and disgraced former national security adviser Mike Flynn.

But he made clear anew that he is sympathetic to their cases. "Somebody has to stick up for the people," Trump said. As for Stone, in particular, he added: "You're going to see what happens. I think he’s treated unfairly."

Former Manhattan Assistant U.S. Attorney Mimi Rocah said the pardons sends a message that corruption is OK and "signal to his friends who are facing investigations or prosecutions for white collar crimes ... that Trump has their back."

Indeed, Pascrell predicted that, following Trump's acquittal by the Republican-controlled Senate, "outrageous abuses like these will accelerate and worsen."

In Illinois, current Gov. J.B. Pritzker, a Democrat, said in a statement that Trump "has abused his pardon power in inexplicable ways to reward his friends and condone corruption, and I deeply believe this pardon sends the wrong message at the wrong time." Republicans in the state echoed his criticism of the Blagojevich action.

Many of the pardons announced Tuesday were advocated by well-heeled friends of the president, including Sheldon Adelson, the billionaire casino magnate, Tom Barrack, a longtime Trump confidant and the chairman of his inaugural committee, and Fox News personality Maria Bartiromo.

Milken's advocates, for example, included all of the above — along with Rudy Giuliani, the president's personal attorney. It was Giuliani who charged Milken with 98 felony counts, including racketeering, insider trading and securities fraud, when he served as the top federal prosecutor in New York City in 1989.

President Donald Trump spoke at the White House on Thursday following the Senate’s acquittal of impeachment charges, saying that the impeachment process was “evil,” “corrupt,” and run by “leakers and liars.”

"He paid a big price, paid a very tough price," Trump said of Milken, who was among a small group of GOP mega donors who spent Election Night 2018 at the White House, according to media reports.

Blagojevich's case had been championed by his wife, Patti, who went on a media blitz in 2018. Appearing on Trump favorite Fox News, she encouraged him to step in, likening the investigation of her husband to special prosecutor Robert Mueller's investigation into Russian meddling in the 2016 election.

And relatives of Paul Pogue, the owner of a construction company found guilty of underpaying his taxes, whom Trump also pardoned, have donated large sums to Trump's reelection campaign.

But Trump also commuted the sentences of several women more representative of the flood of requests that presidents typically receive.

Judith Negron, 48, had been serving 35 years at a Florida prison for health care fraud, conspiracy and money laundering when she was released Tuesday.

"It’s hard to put in words. I’m so excited. I yelled, screamed and cried. We are just filled with happiness and gratitude," said Yamilla Cruz Estrada, Negron's sister, thanking Trump for answering the family's prayers.

"I’m indebted to him for the rest of my life because he gave me my family back," Judith's husband, Hector Negron, told The Associated Press.

Her case, like several others, had been championed by criminal justice reform advocates like Alice Marie Johnson, whose life sentence Trump commuted in 2018 at the urging of reality TV star Kim Kardashian West and whose story Trump's reelection campaign featured in a recent Super Bowl ad. 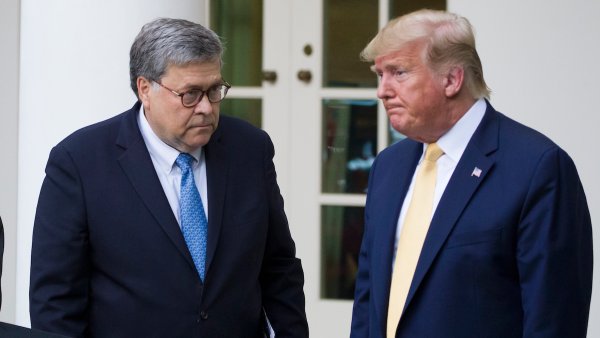 Barr Tells People He Might Quit Over Trump Tweets: Source

Johnson told the AP that the president had been looking specifically for female candidates, and asked her for a list of other women who deserved clemency during a criminal justice conference at historically black Benedict College.

"Kim made a difference going to the White House fighting for me, so if I can fight for something I definitely wasn't going to turn that opportunity down," Johnson said.

Holly Harris, president of the criminal justice group Justice Action Network, applauded Trump "for taking these steps," but said she hoped to see him use his power to help "any of the thousands of deserving individuals who are neither rich, nor famous, nor connected" and "every bit as deserving of a second chance."

Ohio Pastor Darrell Scott, who had advocated for DeBartolo Jr.'s pardon and announced Trump's decision Tuesday surrounded by a handful of football greats, said that when he first brought the case to the White House, the administration was consumed with other matters, including the Mueller investigation. Now that impeachment is over, he said, Trump has time to focus on other matters.

"We finally get to breathe for the first time before something else comes," he said. "I think they're trying to play catch up."